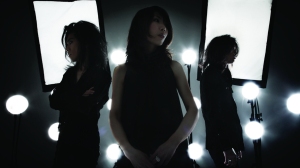 A big fan of Japanese all-over-the-place rockers Boris, are you? Hope you have a hell of a lot of money.

Then again, you probably expect a great deal of production from the band, so chances are, you have a separate fund set aside for when this band explodes with four new albums in one calendar QUARTER! They’ve got another collaboration with Merzbow and a full-length called “New Album,” both of which are Japanese-only releases, as well as their dual U.S. albums “Attention Please” and “Heavy Rocks.” But wait a minute! Didn’t the band put out an album called “Heavy Rocks” in 2002? Is this a reissue? It isn’t! It’s a brand new record, though the cover is practically the same (only now it’s purple instead of orange).

Someone new to Boris – vocalist/guitarist/bassist Takeshi, guitarist/vocalist Wata, drummer/vocalist/crazy man Atsuo — may have a spinning head right now because, admittedly, it’s a lot with which to keep up. You kind of have to do it piecemeal, or if you have that boatload of cash, you can just buy it all at once. But we’re going to focus on “Attention Please” and “Heavy Rocks,” both of which are being released by Sargent House, which is a change for the band after they spent time with Southern Lord. And maybe they still will work with SL in the future. No one can predict what they’ll do next. One of the records won’t surprise their longtime fans too terribly, because it flows right along the organic journey they’ve been on the last decade, while the other throws a few curve balls, in a way only this band could pull off without embarrassing themselves. 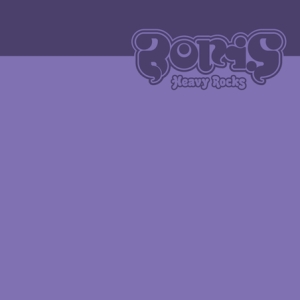 “Heavy Rocks” feels like a fairly natural progression from 2008’s “Smile,” the band’s last domestic full-length. It’s loud, fiery in spots, custom built for air guitar, and if you’re fluent in Japanese, it’s a catchy album with which you can sing along. Even if you don’t speak the language (and not having the benefit of a lyric sheet, it’s tough to tell when or if they toggle to English, other than the obvious “Jackson Head” refrain), this thing is loaded with hooks and thunder, and it’s a positive, wholly satisfying record. Now, there were many who bellyached over “Smile,” in that it drifted even further away from doom and drone, and if you’re one of those, you may not feel as warmly about the record as I do. But it’s not like those folks are totally left in the dark, as they unfurl two crushing epics “Missing Pieces,” which plays out like a psychedelic ballad, and “Aileron,” which is not to be confused by the song of the same name on “Attention Please.” Totally different songs both in sound and concept. The opening two cuts “Riot Sugar” and drum-thumped glam frizzle “Leak- Truth, yesnoyesnoyes-” are chest thumpers, and aforementioned “Jackson Head” is a classic rock-flavored blast. I have listened to this album a ton of times since getting last month, and I don’t see that changing anytime soon. It’s a killer.

Also of note about “Heavy Rocks” is the amount of special guests who actually went to Japan to track their parts and didn’t just dial in via e-mail. Those heavy hitters include Ian Astbury, the legendary frontman for The Cult, who played with Boris on last year’s excellent BXI project; Faith Coloccia (Mamiffer); Aaron Turner (ISIS, Mamiffer); and longtime collaborator Michio Kurihara.

Now, “Attention Please” is the one that’ll turn some heads. While Wata has sung on past Boris songs, she never got an album that was entirely her own until now. She has a very breathy, almost whispery voice, and the material she works with here is suited perfectly for her. So naturally, the thunder and decibels are dialed down, and record is a slinkier, smoother, poppier album than we’ve come to expect from the band. But it works. Truth be told, I prefer “Heavy Rocks” over this record, and no, not because the songs are louder. For me, the songs are better and easier to get excited about than what’s on “Attention Please,” but this effort has some excellent merits in its own right.

I’m sure some metal fans, when they see the word “pop,” it conjures some not-so-positive judgments. And I don’t blame you. But

don’t read the adjective as meaning the band is trying to go Top 40. What I mean is, the songs are more delicate, easier to digest, and they feel like something that would have a wider appeal than what Boris usually conjure. It’s wholly Boris through and through – they’ve always been chameleons – and this stage for Wata is both well-deserved and another example of what has kept Boris so intriguing all these years. The record kicks off with the title track, which has a discoy feel to it, and Wata’s heavily broken English on the chorus is both precious and what makes that passage so sticky. “Hope” is more uptempo and sort of has that classic 4AD-style indie rock glaze on it; “Party Boy” is gritty and grungy, with … are those manufactured beats, and were they designed in outer space?; “Brown Sugar” is delicate and gazey, with a futuristic touch on this streamy ballad; and “Spoon” is most like classic Boris, with volume, attitude, noisy drums and an energetic, addictive guitar line. “See You Next Week” and “Tokyo Wonder Land” are smooshed together in the middle of this disc, and both are more experimental, with Wata’s dreamy voice guiding the way, and closer “Hand in Hand” is a gentle, yet noise-washed ballad that is the perfect set-up for Wata’s mesmerizing singing. “Attention Please” is truly one of the most interesting, different albums in Boris’ mammoth catalog, and I’d expect reaction to it may be mixed because of that. But it’s worth your time, and if you’re like me, you’ll be sucked into the thing deeper and deeper with every listen.

Unabashedly, I’m a huge Boris fan and have been for some time. Every album is an adventure, one that could go horribly wrong with ill-advised turns, but somehow they always find their way through. I know many other listeners don’t quite feel the same way about their experimentation, but that’s what makes the band so pleasing to me. You never really know exactly what you’re going to get. I mean, these two records could not be more polar opposite, yet they’re true to Boris. I feel like in my household, the “Heavy Rocks” record is the one for me, “Attention Please” is more for my wife, and that has nothing to do with gender, rather our individual tastes. We meet in the middle with the Boris concept, then they take us to the places we enjoy the most. I’m curious to hear the reaction these records get – I’m sure there will be some snooty dismissals that’ll have zero to do with the quality of the music – as well as where they’ll go beyond these works. Maybe we’ll eventually get a record combining all the ideas they explore on both pieces, though that seems far too static an idea for such an ambitious trio.

For more on the band, go here: http://borisheavyrocks.tumblr.com/