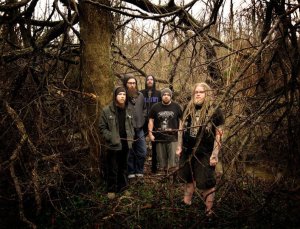 It’s been an ugly, stormy, fairly chilly week here in Pittsburgh, totally unlike how it usually is in the middle of May. I’m half expecting a snow storm any day now.

If that frosty mix does arrive (and it’s not forecast to happen, as we’re looking at temps in the 80s this weekend), “For Winter Fire,” the first full-length from black/doom/ambient/death unit Seidr, will have surfaced at just the right time. It’s a record that works perfectly against the backdrop of a dark gray, grainy sky, one that promises the blooming you’re seeing right outside your window might not be long for this world. And nature’s (and our very own) cyclical existence is just one of the topics this band touches, combined with other material that leans heavily on Norse mythology, spirituality and the cosmos. It’s a pretty involved listen both lyrically and musically, as most of the songs reach well over 10 minutes long, and the album itself challenges just how much content that compact disc can hold. Luckily, each second is riveting.

The main creators here are Austin Lunn (most notably known for his one-man black metal project Panopticon, itself a must-hear endeavor) and Wesley Crow (Wheels Within Wheels), who handle all of the music you’ll hear on “For Winter Fire,” though they’ve since brought on additional members to handle the live interpretations, including vocalist Jack Hannert and bassist Adam Nicholson. Comparisons can be made to a wide variety of bands, from ISIS to Neurosis, and from Bloody Panda to Sunn 0))) to Asunder (the funeral doom version). All of them fit to an extent, but none should be leaned on to give a full idea as to what to expect on this record.

The name Seidr itself is an interesting one. It seems to be derived from Seid, an old Norse term for a style of witchcraft and sorcery practiced by pre-Christian Norse (see the Wikipedia entry here: http://en.wikipedia.org/wiki/Sei%C3%B0r) and considering how much they immerse themselves in Nordic tradition (the band hails from Louisville), the selection of such a moniker would make some sense. It also would explain the frosty feel of the music, considering the long association between Nordic tales and chilling winds and snow. I don’t pretend to be an expert in these areas, by the way. I’ve picked up a little mainly through some of the metal I listen to (thanks Unleashed, Burzum, and Amon Amarth), but I won’t try to break down the concepts too deeply for fear of embarrassing myself. 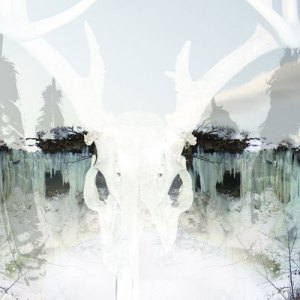 The album launches with “A Vision From Hlidskjalf,” a reference to the throne of Odin, and the doomy sludging spreads itself out over 11:26. It is both suffocatingly dark at times, refreshingly spacious at other intervals.  “Sweltering” begs for rain for parched throats in the simmering, relentless sun, and eventually those waters flow audibly, as the band takes a turn toward melody and beauty. The end is furious and punishing, however, and it’s hard to determine if the narrator is doing penance or experiencing refreshment from a violent storm. “The Night Sky and Wild Hun” slithers and hulks, with some power metal trappings and eventually some Middle Eastern-style acoustics entering the mix; while mournful “Stream Keepers” pays tribute to a fallen friend, with slow-driving doom building into a thrashing tempo change, and delicate piano drops eventually helping the piece evaporate into thin air. One of the most surprising songs on here is “In the Ashes,” the shortest cut that is a delicate folk number that sounds like it came from the Bindrune Recordings collection. Any fans of Nechochwen or Celestiial will find themselves right at home in this passage’s woodsy canopy.

“For Winter Fire” certainly isn’t one of those records you can pop in and listen while you take a quick trip to the local grocer. It’s not that kind of piece. This requires concentration and dedication, and it’s one that might make more sense absorbed while on the back porch, adult beverage being optional. Their grip of nature and immersion in the tales of the Norse gods always feels true and unique, which isn’t an easy task considering how damn many bands claim to pay homage to these same things. Doing it is one thing, meaning it quite another.

This also is another landmark effort for Flenser, who have brought us some excellent entries from bands such as aforementioned Panopticon, as well as Palace of Worms, Necrite, Ghast, and Pale Chalice. It’s a label you might want to start paying some close attention, if you haven’t already. They don’t put out a ton of releases every year, but what they do unleash obviously has been well researched and scouted, and each of the bands has a clear, identifiable personality. You can tell these records aren’t being put out for the sole purpose of claiming your money, but are made available because they are bands in which the label truly believes, and their work deserves to be on the market. I look at what Flenser does as comparable to Profound Lore. That’s probably why I trust these labels so deeply.

Funny, but as I’m finishing this entry, the thunderstorm has subsided, and the sky is brightening, if only slightly. But it’s a cycle, the rains will come again, and I’ll probably still have Seidr on in the background. Makes me wonder how “For Winter Fire” will feel to me once those dark, snowy months return. That’ll be another chance to tackle this album again to see if a personal reinterpretation takes place. Chances are, it will.

For more on the band, go here: http://www.myspace.com/seidrdoom