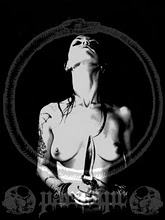 Sometimes some innocent exploration can lead you somewhere you never expected but that ultimately brings you to treasure. That happened to me recently when a simple band search led me to Parasitic Records, a label I had heard of before but with which I never really had any tangible contact. A couple of e-mails later, and that became a thing of the past.

The band is question is Anhedonist, who I’d read about online, and since I’m a sucker for just about anything doom, I knew I needed to hear them right away. So quite simply, I bought their demo on cassette through Parasitic’s web shop, and all of a sudden, I had run headlong into an exciting, violent new band whose career I decided I would follow with great interest from here on out. That also made me wonder what else Parasitic had up their sleeves, and days later, the new Aldebaran disc showed up in my mailbox.

We’ll start with Anhedonist, since they led me down this path initially. Their demo “The Drear” was released on cassette only a year ago, and from there, they leveled audiences live with their death metal-powered doom, that’s both gloriously melodic and packed full of sorrow. You can’t get your hands on the tape anymore (unless you get lucky or hit eBay or something … of you offer me $10,000), but Parasitic is now offering the vinyl version of the demo, which if you’re hungry for lo-fi, dingy, suffocating doom, you’d do yourself a real favor by grabbing a copy of this thing.

The Seattle-based band has been doing its thing since 2008, and I know how clichéd-ridden this is going to sound, but if you think of the

drab, rain-soaked, muddy pit of depression most people think that city embodies, you’ll have a good idea on what you’ll hear on these three songs. They’re unforgivably slow-driven for the most part, though “Despond” does have more speed and steamrolling, but it, too, settles back into those lurching, abrasive tones before it runs its course. The vocals are pretty deep in the mix, though the brush-burned growls certainly are audible (V.B.’s shrieks at the closing of “The Insatiable Hole” are damn-near inhuman sounding), and while there’s a lot of gloom to digest, they lace everything with flavorful guitar melodies that don’t exactly brighten the terrain but do add more depth to their sound.

The band recently finished up a run of dates with like-minded bands such as Vastum, Ilsa, Thou, Loss, Hour of 13, and Pallbearer, and anyone into that spate of bands probably will dig Anhedonists’s sickness. I could see Anhedonist eventually becoming a Southern Lord or Rise Above band in the future, as they’d fit right into those two rosters, and they certainly should be a major player soon with more exposure and more time slaying live audiences. Hopefully this entry will help at least a little bit in getting them there.

As for Aldebaran, the band just put out its new EP “Buried Beneath Aeons,” which follows a couple of splits with Unearthly Trance and Zoroaster, as well as their debut 2007 full-length “Dwellers in Twilight.” The band is described as sludge doom, and that fits to an extent, but there’s something about “Aeons” that makes me think more along the lines of atmospheric funeral doom. Of course, with a one-cut, 27-minute track, you’d expect the band to visit all kinds of different sounds, and they do that with post-metal and some death. I just keep coming back to that spacious funeral doom feeling, with its often slow tempo, like it’s meticulously scraping its way across the land, and the overall pall of hopelessness and decay. It’s a really incredible listen, too, and it never feels nearly as long as its running time, which should quell the fears of anyone who doesn’t like long songs (hey, those people are out there, believe it or not).

The guys who comprise the band – bassist/vocalist Josh Banke, guitarist/vocalist Todd Janeczek, guitarist Kody Keyworth, and drummer/vocalist Tim Call — have a wealth of experience, not only with this band, but with other notable acts such as The Howling Wind, Tusks of Blood, Anger Management, Oakhelm, and plenty of others. They open this opus on a clean, relatively calm note, kind of finding their way through a mist before launching with all sledgehammers down on a crushing doom note that meanders just as it should. It reminds me a lot of Aussie band Mournful Congregation and the Bay Area’s Asunder, and that perhaps, it what led me to describe this as funeral doom.  The music can trigger trances and deep meditation, which heavy music often isn’t capable of achieving, and when this journey drones out in front of you, it’s not hard to imagine a dark, stormy expedition over a mad sea, with sickened and dead bodies stowed away, or even standing by ages ago and watching a train carrying deceased soldiers or national leaders. There’s such a dread hanging here you practically can reach out and grab it. Not that you’d necessarily want to do that.

It also should be noted this effort was recorded and mixed by doom studio extraordinaire Billy Anderson, who has worked alongside bands such as Neurosis (you also can sense their influence on this album), Orange Goblin, Ludicra, the Melvins, Brutal Truth, Cathedral and a ton more, and his fingerprints are very obviously on this thing. As for Aldebaran, they seem to be as hungry and driven as ever before, and a second full-length from these guys would be a fitting and long overdue gift. But it’s cool to have this EP for now, because it is about as good as any doom recording that’s bubbled to the surface this year. And there’s been a ton of good doom in 2011.

Admittedly, this is just scratching the surface of what Parasitic offers. A trip to their site, a link to which you can find below, has the full gamut of what you can get from them, and it’s a pretty killer selection, in my opinion. You can grab both the Anhedonist vinyl and the Aldebaran disc from them, as well as a wealth of other things.

For more on Parasitic and to buy their products, go here: http://parasiticrecords.blogspot.com/