Reissues, to me, serve two purposes. For one, it lets listeners get up to speed on a band perhaps he or she didn’t get to the first time around. Second, in the digital and iPod age, it gives the consumer a better version of an older album that perhaps didn’t translate so well to your little hard drive you’re carrying around. I also understand some people who complain about reissues, especially if it’s a record that’s only a few years old and is being re-released to cash in on a band’s popularity. But no one’s forcing you to buy the new version, right?

Anyhow, I happen to be a fan of reissues, for both of the reasons listed above. For example, I made sure I got the new, re-done versions of the Carcass and Death albums because the packaging is awesome, it comes with tons of extra content, and they sound way better on my iPod than the versions I had. Relapse just put out a couple of reissues that serve me better in the other category, giving me more exposure to bands that, for whatever reason, don’t comprise much of my collection.

First up are San Jose death thrashers Dekapitator, not to be confused with Polish death metal fleet Decapitated. For now, the band is listed as on hold, and not dissolved, but they haven’t hit us with a new record since 2007’s “The Storm Before the Calm,” and even though the group has been together since 1996, that was only their second album. Of course, their frontman/guitarist Matt “Hellfiend” Harvey was and is again consumed with his death grind outfit Exhumed (we discussed their awesome new record “All Guts, No Glory” a couple weeks back), so it’s understandable that Dekapitator has to sit on the sidelines for the time being.

If you discovered the band with “The Storm Before the Calm” or are new to them altogether, there’s a fantastic document out now in the 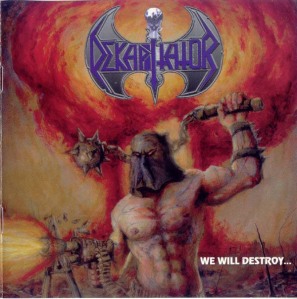 form of their reissued debut album “We Will Destroy … You Will Obey,” originally released in 1999 and long out of print. So you’ve either been hunting for this thing or you’re simply intrigued by the band’s vintage black thrash sound, which does sound a bit dated today, but in such an awesome way. You can tell by listening to much of the new wave of thrash bands that this style is kind of what those groups were going for, but Dekapitator is the real thing. None of these newcomer groups come close to matching them, and even with the slight cheeseball factor, it’s such a great, pulverizing debut. There’s hell, war, bloodshed and carnage all over this thing, and sometimes Harvey does his best falsetto, like he’s dreaming of thrash’s glory days in the mid-1980s. I grew up in that period and listened to all that stuff, so this is like a nice nostalgia trip, at least philosophically. The whole album has been repackaged altogether, and included are four bonus cuts. Plus, the album art completely, totally rules.

If you’re into vintage thrash, some of death metal’s earliest power, and a little bit of horrific silliness, you’ll want to grab a copy of this. It’s just a bad-ass record that reminds listeners sometimes it’s cool for a heavy album to just be fun. Best heard drunk while holding a battle axe.

General Surgery (in their current form)

I already mentioned Carcass, and a band that gets a lot of grief for being a clone of theirs is Swedish band General Surgery. There’s a damn good reason that happens, basically because the people that accuse them of such blatant copying are pretty much correct. They sound a hell of a lot like a band trying to be Carcass. But that doesn’t mean their music isn’t good and worth your time, because I’ve always found it is decent listening. It’s OK not to take every metal record you hear as seriously as the U.S. Constitution, you know? Just listen to it, and if you like it, then like it. Sorry, that’s just always irritated me. As many bands that are in existence, some are going to sound alike even if that isn’t the intent. Focus on the quality of the music. You’ll live a happier life that way. And by the way, Carcass’ Jeff Walker has said some complimentary things about General Surgery. Anyway, I kind of dug the limited amount of stuff I heard from this band over the years, and was looking forward to revisiting “Necrology,” a deluxe reissue of their 1991 EP (now with three bonus tracks, all alternate versions of “Necrology” cuts). By the way, the lineup you hear on this reissue is totally altered from the one that lives on as General Surgery now. So know that going in, just in case you got into the band with their more recent material. 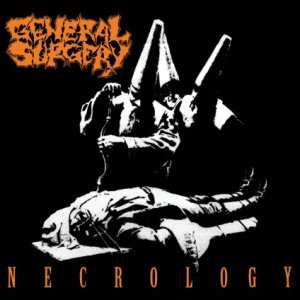 Anyway, this 10-track effort is sticky with blood and disgusting as hell, as the dual vocals lurch out like a combination of belching and choking on bile. It’s heavy, thrashy, monstrous, and a real blast to absorb, even if it triggers that gag reflex. This is all figurative, of course. If the music literally was sticky with blood, I wouldn’t touch it. Germ freak, right here. The vocals on “The Succulent Aftermath of Subdural Haemorrhage” sound like a lion and demon battling for the stick. It’s ridiculous. “Crimson Concerto” fuses both classical music geek and flesh eater hunger in the same package; “Slithered Maceration of Ulcerous Facial Tissue” is a brow-beater, especially when it comes to the rapid-fire drumming; and “Grotesque Laceration of Mortified Flesh” has a pretty sweet grind groove and those blood-curdling growls you’ve come to love from this band. It’s like being operated on while you’re awake. Who doesn’t love that?

If you can’t shake the Carcass thing, then you probably won’t like this or give it a chance. If you just appreciate a total splatterfest of grindcore and death metal that turns your stomach as much as it pleases your ears, this reissue just might make your heart fill with joy. Just don’t be surprised if you can’t eat for a few days after you’re done with “Necrology.”

For more on the band, go here: http://generalsurgery.se/

For more on the label, go here: http://relapse.com/