One of the records I’m most exciting hearing about this year is the new one from Canadian grinders Fuck the Facts. I feel like I’ve been hearing about “Die Miserable” for 14 years now, but I assume that’s the anticipation and isn’t grounded in fact. The assertion we base things on fact here at Meat Mead Metal would be one of folly.

But this afternoon comes news that the band’s ninth full-length finally will hit the shelves Oct. 11 via Relapse Records, who put out their last two efforts “Stigmata High Five” and “Disgorge Mexico” (that eventually got movie treatment by way of filmmaker David Hall). It’s not as if the band has been silent since putting out “Disgorge Mexico” in 2008, as they’ve toured relentlessly and even put out a handful of smaller efforts, including “The Wreaking” and “Unnamed” EPs, a “St. Jean Baptiste 2010” live piece, as well as a nine-track “Live at Whitby” document.  Along the way, they also celebrated their 10th anniversary and that, too, sparked another tour from these road warriors.

There’s no preorder info yet from the label, but likely that’ll be coming pretty shortly, as they already have the Brutal Truth stuff up, and that’s not out until Sept. 27. You can keep checking the Relapse shop link below if you’re an obsessive freak. Also below are, yes, more tour dates from these sleep-deprived, well-traveled, hard-working  maulers. Catch them if you can (or, basically, if you’re in the Maritimes).

For more on the band go here: http://www.facebook.com/FuckTheFacts

For more on the label, go here: http://relapse.com/ 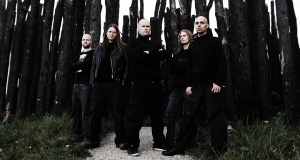 The Cleansing (photo by Pia Ry)

There’s something about death metal band The Cleansing that seems a little swampy. No, they don’t use mouth harps or banjos or sing about alligators. Instead they sound like they would have been right at home alongside the Floridian death metal uprising of the early ’90s alongside Death, Obituary, Malevolent Creation and even Atheist.

But the band’s a relatively new one, and they hail from Denmark rather than the Sunshine State, but their model is very rooted in the classic sounds of two decades ago, and where those death pioneers went after their initial births. There is a bit of a Euro death feel as well (I can sense some Vader and Behemoth in spots), but those times are not quite as prevalent. They’re releasing their second effort “Feeding the Inevitable” on Deepsend (we talked about that label’s reissue efforts last week), and for those who like their metal honest, straightforward, a little ugly, and sometimes brainy, giving this band a listen might do those listeners some good. This isn’t that slicked-up death metal we’ve come to know the last half-decade or so, but it also isn’t terribly lo-fi or grimy, like it came from someone’s basement. It’s a pretty damn good sounding record, pulverizing, lurching, and a meat-and-potatoes brand of death. That meat’s raw, by the way. Be careful consuming undercooked flesh. 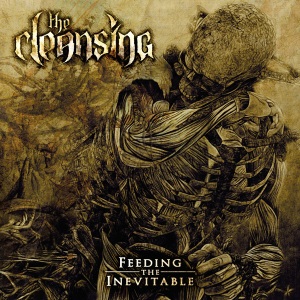 “Feeding the Inevitable” is the follow-up to the band’s debut record “Poisoned Legacy,” that dropped in 2009, and one noticeable difference is that guttural voice you hear on these tracks. That’s the voice of singer Toke Eld (formerly of Usipian) who takes the place of Martin Rosendahl, who also handled bass duties and now is out of the group. Now, this is where it gets weird. Eld was a member of The Cleansing from its formation, but he wasn’t able to record vocals for the debut, so Rosendahl did them. That wasn’t a problem this time, and his deep, throaty  growl is all over this thing. He isn’t the most dynamic or unique frontman in the world, but he does just fine for what this band does. I don’t think anyone will listen to The Cleansing for only one aspect of their music anyway, as it all blends together and works as well-oiled parts to a larger machine, so Eld does the trick just fine.

The guitar work is pretty interesting, and you can hear some prog in their progressions, which is where the Atheist and even Cynic comparisons enter the picture. “Third Eye Staring,” “Hour of Decadence,” and “Law of Reciprocity” all have headier, trickier guitar parts and loopy solos courtesy of ax men Jeppe Hasseriis and Andreas Lynge (both formerly of Usipian, like Eld). These are the types of songs that’ll have the musicians in their audience all excited because of the inventiveness and atmosphere Hasseriis and Lynge’s playing injects into the songs. Even a track like “Processed for Contamination,” which is pretty mid-tempo and a real change of pace for an otherwise devastating, speedy record, really benefits from everyone thinking outside the box and trying on new, more airy and cleaner tones. It still has a heaviness to it, and it also is the eeriest cut on this whole record. Personally, it’s my favorite track on here and one that shows their open mindedness.

But if you’re more interested in simply being blistered, this record has that, too. “The Promethean Promise,” “Your Flesh, Your Curse,” and the smashing closer “Crossroads,” which sounds like modern industry being crushed under the weight of imminent Armageddon, should satisfy your craving for barbarianism and classic, old school death metal. But even though these cuts show their more primitive side, there’s still a great deal of thought put into these tracks, so you can tell they’re not swinging away without thinking about their target’s weak spots.

I’m not sure “Feeding the Inevitable” is going to be a touchstone death metal release for 2011, but no one’s saying it has to be. It’s a solid slab of true death that’ll get your fists pounding on the table, but it’ll never make you feel like a meathead in the process. Don’t underestimate that. As much death metal as I hear doing what I do, more often than not I feel dumber when a record’s over. This one always left a good taste in my mouth – raw meat! – and kept me coming back for more. For me, that’s all I really ask as a listener. Give me a reason to return, and The Cleansing have done just that.

For more on the band, go here: http://thecleansing.net/