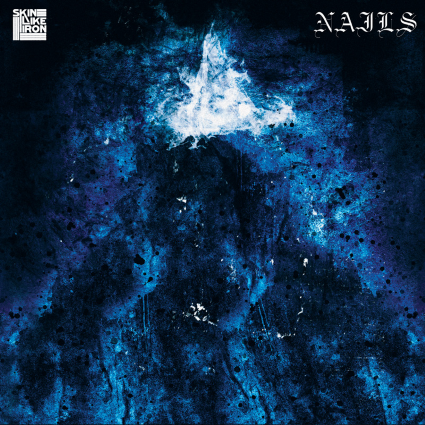 Hey, you got 10 minutes to kill? Don’t say you don’t. Really, what do you have to do that’s so important? So sit down, shut up and get prepared to have your body beaten to a gory pulp.

I generally go long with the reviews on this site because I like to give as much insight – valuable or not – that I can about the music, but it would seem silly to go on and on about the new split effort from Nails and Skin Like Iron. This four-track piece of soul burial is over before you realize what happened, and if you’re compelled to go back and get flattened by this steamroller over and over, then I’m right along with you. Plus, as noted, the damn thing is 10 minutes long. That’s shorter than your average coffee and smoke break, and it’ll make said breather give you a boost of adrenaline that no latte or five-hour energy deal could match. Plus, you know those five-hour things are going to eventually be revealed as utter poison for your body. This split effort won’t be.

Skin Like Iron hail from San Francisco, an area that’s given us a lot of heady metal over the years from the likes of Giant Squid, Ludicra, Palace of Worms, Cormorant and so many more. These fellows are not quite of that ilk musically, but they are emotionally. Their stuff is heavy and satisfying, but strong melody lines runs underneath their emissions, giving what they do a bit more of a classic punk sound. The band has a smattering of recordings out on labels such as React!, Six Feet Under and Free Cake (many you can download for free at the Bandcamp link below), and their D-beat friendly, catchy hardcore sound likely could find a home at Deathwish Inc. at some point.

The band’s two offerings here are infectious and punishing at the same time, with charging guitar work, raspy shouts from Alex Capasso, and a musical environment that hints their shows would be as fun as they are physically demanding. They kick off with “Disappear,” an abrasively friendly anthem that should make all the fake assholes who pass themselves off as punk rock these days feel like the fraudulent jerks that they are. “The Parade” has more of the straight-up hardcore vibe, though the guitars remain colorful as ever, and the environment remains inviting to those who don’t mind doing a little sweating. Skin Like Iron could be a band that also could cross over to, say, the Warped Tour to give those kids a good shaking and a waking up. But that’s probably way too corporate for these fellows, who probably are just as content to rip down a club or VFW hall near you.

For more on the band, go here: http://www.facebook.com/skinlikeironsf?sk=info

Temporarily departing from today’s topic, if you have 11 minutes, make sure you visit Nail’s Southern Lord debut “Unsilent Death.” It’s over in a blink, but don’t think that, if you haven’t heard that platter yet, that you’d be wasting your money on such a compact full-length. It’s heavy and nasty and bloody good, and you should make a point to check it out alongside this split effort. They also have stuff out on Six Feet Under and Street Cleaner, and all of it will rattle the hell out of you. In fact, these dudes are so relentless, they qualify as one of the most violent hardcore acts out there, and their live show is said to be one to behold.

Nails’ tracks are like two hammers exploding into molten chaos. They are furious like no one’s business, and just listening to this music on your home stereo system or your iPod or whatever might get you maimed. “Annihilation” drops an anvil on you right off, and the fumes from Entombed can be sensed in your nasal passages. It’s grimy, throaty and mangling, and it will leave you in the dust. “Cry Wolf” is classic Nails, lasting a mere 22 seconds and ending in a tirade of profanity that’ll both make you worry and probably chuckle at its unquestioned venom. Nails’ packages may be tiny in size, but they’ll rip your face off like the Unabomber’s most heinous creations.