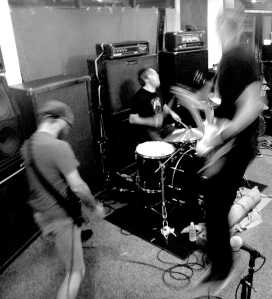 Nothing like being thrown right back into the raging fire, huh? The one drawback to vacation is that as much as you enjoy it, once you return, you’re a week behind in your work and have to put forth furious effort to catch up to where you were. That’s way easier said than done, and in some ways, you never really catch up.

All week long, I feel like I’ve been operating in a foreign land, with weird material that makes no sense to me, and a workload that both seems to have been on pause and changed entirely in a little over a week. Thus is life, and there are people fighting diseases and hunger and shit who would love to trade places with me. So we carry on, and it was so nice to have some great accompaniment music this week to help stoke the fires. Most of what’s gotten me going we can’t talk about yet, because the release dates are several weeks and even months away, and some of the music has a review embargo on it. Crazy, right?

Luckily “Reclamation,” the new, limited release from Milwaukee hardcore maulers Protestant is one we can discuss right now, and it was one of those promos that when it arrived in my inbox, I kind of had to rub my eyes to make sure I was seeing what was in front of me. I’m not a huge hardcore guy, as I’ve stated in the past, but that doesn’t mean I don’t like it. It’s just my metal collection heavily outweighs my hardcore stockpile, so there are fewer of those bands that get me amped for new material. Protestant is one of them, and the second the download was completed, I had the music on my iPod and in my ears. 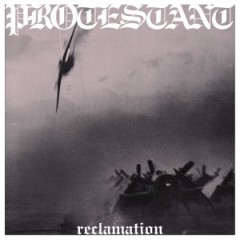 Protestant have been around nearly a decade now, and they have a nice collection of split releases, 7-inchers, and full-lengths to their name. In fact, their “Judgements” album is one of my go-to records when I’m feeling more into taking on hardcore than metal, which mostly happens when I’m going on my daily hate walk. This band’s music always manages to get into my blood and kick my ass in a totally positive way, and that record was one that really opened my eyes and kept me paying attention to this band. It’s a killer serving of emotional punishment, and I’m never not in the mood to hear it.

But we’re here to discuss “Reclamation,” and what a fine five-track collection it is. The band sounds just as spirited and channeled as ever, and the production quality of these cuts is a step above some of the earlier material. The guitars are alive with energy and adrenaline, and the vocals sound like they’re drawn directly from the heart. That’s another thing I really love about Protestant is that you have no question they mean every second of their songs, as they never let up as far as expression and delivery are concerned. You have no choice but get captured by them.

Side A has three cuts, opening with “Home,” a melodic outpouring that’s packed full of humanity and relentlessness. That leads to “Jan Palach,” a song named after a Czech student who committed suicide via self-immolation after the Russian invasion. As you can imagine, the song is pushy and righteous, with lines such as, “I’ll fight to save what’s left,” setting the revolutionary tone. The title cut wraps up the first side with a more metallic feel and some piano dripping into the song, as epic guitar work and raspy howls push the other way. Side B kicks off with “Unbecoming,” a bit of a departure from the rest of the songs, with a slight black metal flavor to the whole thing. “Salad Days” ends the collection and really goes for broke, with a jarring assault, more throaty vocals, and a finish that leaves you wondering how anyone could be left breathing if they unleashed this cut live.

As noted, this album is limited edition, with only 500 copies being pressed (400 in black vinyl, 100 in white), with Halo of Flies handling business in the United States and Chaos Rurale eviscerating Canada. This is a hell of a good collection, something to both tide you over until Protestant put together another full-length and to deliver some bruising songs that’ll give you a boost when you need one. I pretty much always need one, so this package will come in handy.

For more on the band, go here: http://protestantmilwaukee.com/