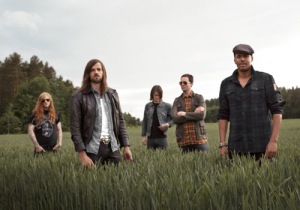 Imitation, flattery, whatever. People accuse bands of biting off other people’s sounds all the time, and sometimes it’s true, sometimes it isn’t. And thus awkwardly begins our tale of Swedish doom metal band Witchcraft’s entry into and journey through the world. They started off as a band that paid homage to Pentagram. Which is weird, because Pentagram basically grew out of their worship for Black Sabbath. Oddly, Witchcraft do still have those traits they absorbed from Pentagram, yet also incorporate enough Sabbath-ian elements to demonstrate the whole circle of influence.

Anyway, enough people have bombarded Witchcraft with the Pentagram ripoff accusations now, and it’s time we clear some air. They may have started knelt at the Bobby Liebling altar, but the band has grown pretty far away from that over their four full-length albums, their latest being “Legend,” out on Nuclear Blast. When I put on the band’s albums, I certainly can differentiate Witchcraft from their influences, and to be potentially sacrilegious, I prefer Witchcraft over Pentagram. Feel free to scorn me in the comments section for my feelings. But it’s true. Their music is smooth, psychedelic, and catchy, and I really enjoy what the Swedes have carved out as far as a career.

One of the main appeals of Witchcraft’s music — and it’s been this way since day 1 — is vocalist Magnus Pelander. His delivery is charismatic, sophisticated, even jazzy at times, and he easily stands out in the entire doom genre for his pipes and style. He’s one of my favorite modern vocalists to hear tell a tale, and he sounds like he could tackle any of the millions of hard rock-related genres and hit it out of the park. He’s as good as ever here, nonchalantly weaving his way through these nine cuts, now and again causing you to leap from your seat with a well-placed yowl or angry declaration. More on that later.

“Legend” is the band’s first album in five years, following up 2007’s excellent “The Alchemist,” a record that had the band moving closer to trippy material. There is some of that on this new album, but most of what you’ll hear is rooted in traditional doom and metal. The songs are strong and catchy, though I’m not sure there’s one that stands out quite like “Walk Between the Lines” or “If Crimson Was Your Colour.” The fiery “Democracy” comes close to that, but for the most part, finding a song that could be a breakout for the band isn’t quite as easy. That said, the entire album experience is a fun one, and “Legend” surely pays off that five-year wait.

Also, the band is comprised of new faces on “Legend,” as 3/5 of the group was overhauled. Making their debut on this album are guitarists Simon Solomon and Tom Jondelius, as well as drummer Oscar Johansson, and that trio joins Pelander and bassist Ola Henriksson. The reconfigured unit sounds pretty tight, and there’s even a new fire lit under the band and more muscle in areas that were lacking on “Alchemist.”

The sonic shift is apparent on opener “Deconstruction,” a driving, forceful song that goes against the band’s sometimes laid-back approach, and Pelander imagines, “Satan is amused,” when he ponders the disastrous ways of the modern world. “Flag of Fate” is kicked open by some tasty drumming, psychedelic strumming, and a strong chorus, making it one of the catchiest cuts on the record. “It’s Not Because of You” is nearly as infectious, especially when the chorus strikes, and it has that classic blues-infused Sabbath feel. “An Alternative to Freedom” is a bit of a grower, with some nice slide guitar, a spacious atmosphere, and electric soloing at the end of the track.

“Ghosts House” also pours in some classic Tony Iommi vibe and overall creepiness, but a weird delayed effect on the vocals on just about every line makes listening to the song kind of tedious. It’s the one misstep on the album. “White Light Suicide” brings the tempo back up, with hand claps and swampy riffs, but then it settles into a middle tempo and grows reflective before an ominous conclusion. Aforementioned “Democracy” is the angriest cut in the band’s catalog, taking a critical political stand, as Pelander launches into well-delivered tirades such as, “Fuck your heroes, and screw your gods.” Yet all the while, he’s singing, not screaming, and doing so with such soul, his anger is even more effective. “Dystopia” is mystical and powdery at the start, before it lights up and guitars and thunder take hold, and the intensity stays pretty ramped up until cymbal splashes push the song to its conclusion. “Dead End,” the 12-minute closer, opens with Pelander asking, “Tell me now, who is without sin?” as he begins his examination. It plays out like an Iron Maiden epic, with pockets of calm and serene balanced with bombastic outbursts and some of Pelander’s most forceful vocals. It’s a song that makes fine use of its running time and puts one hell of an exclamation point on this record.

It’s nice to have a new Witchcraft album in our hands, as they are one of the more colorful, interesting bands in any level of doom. “Legend” certainly was worth the long-ass wait, and hopefully now with a new label home and refurbished lineup, it won’t be so long before we hear from them again.

For more on the band, go here: http://www.witchcrafthome.com/

For more on the label, go here: http://www.nuclearblastusa.com/en/