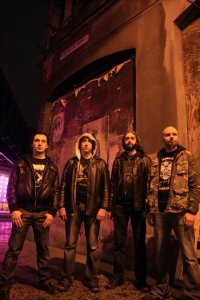 You know when you have one of those particularly disturbing dreams how you sometimes wake up and wonder if the story your brain just told you really happened, or if it all was just a horrific show to jar you from your sleep? I have those a lot. I had one a few weeks ago where I watched, from my 32nd story desk, a jetliner crash into the smaller buildings situated beneath where I work. It was so real. But luckily not real.

I don’t know what leads people to have these nightmarish images, and even having gone through dream interpretation as part of my therapy, I still sometimes have a tough time coming to grips with what makes me see these things when I sleep. As easily as I can connect other, less affecting dreams to things going on in my life, these catastrophic ones never seem to relate to anything obvious. I sometimes worry that perhaps I have this perverse desire to see something tragic like this unfold, but consciously I know I’d never want to witness an event like a plane crash. The horror would be too much to handle.

That got me thinking more about “Vessels of Light and Decay,” the new effort from Indesinence (mixed with Greg Chandler of Esoteric, mastered by James Plotkin), a band that’s tackled dreams in the past and whose album art for this sophomore release looks like the nighttime terrors that plague a child’s head. It’s murky, yet colorful. There’s a hooded figure with a hand held out, but is it to invite you to something exciting, or is he leading you to the path to your destruction? There’s plenty to interpret simply in that painting, and having not yet seen the elaborate, hard-covered finished copy, my imagination remains in overdrive about what that package will contain. That’s also an exciting thing for someone like me, who grew up buying records and spending hours poring over the contents once it was in my grasp. That doesn’t happen too often anymore.

We haven’t gotten a full-length from underground UK doom-death titans Indesinence since 2006’s excellent “Noctambulism,” and album you can find pretty easily online and that could give you a nice introduction to the band’s work. The doom is a funeral-style lurch, drubbing and hopeless all the way, and their brand of death metal is straight from the early 1990s, when the genre still was ugly, guttural, and raw. There’s nothing glossy or polished about Indesinence because this stuff wasn’t mean to sound that way, but as players, they’re as good as it gets. Guitarist/vocalist Ilia Rodriguez, guitarist John Wright, bassist Andy McIvor, and drummer Daniel Ben-Haim pack plenty of despair and unforgiving heaviness into their music, and I can’t help but shake the feeling that their music could soundtrack the aftermath of an airplane leveling a city block, and its aftermath, perfectly. But that’s just my nightmare. I’m sure whatever keeps you awake at night would be that much more panic-inducing with Indesinence shoving the story along.

After a weird, choral chant-laced opening sequence “Flux,” it’s right into “Paradigms,” a 14-minute slow bruiser that seemingly stretches through time and space. The growls are ugly and punishing, and the whole thing chugs in place over a mid-tempo. “Time erases nothing,” Rodriguez growls, as he and the rest of the band seem to make each moment stand still and hold the weight of planets. “Vanishes in the Haze” is chunky and utterly doom-infested, with a bagful of tempo shifts, morose melodies bleeding from the guitar work, and a mix of growls and shrieks that serve to fatten the already thick sense of dread. The song fades into a wall of feedback, and then “Communion” comes crashing through shoulder first, with a punchy, thrashy makeup, guitar soloing that teeters on glorious, and a new interest in speed, as classic death metal threads show.

The second half of the album opens on “Ka Madrugada Eternal,” an ambiance-rich, dream-like affair that lulls you into long periods of wall gazing. It’s a nice buffer from the first half to the final two cuts that stretch over more than 28 minutes combined. “Fade (Further Beyond)” runs more than 14 minutes, and it’s the one track where perhaps a little could have been shaved off the end for better effect. But it’s still a meaty, varied song, with some strains of deathrock, foggy and muddy traveling, and eventually more signs of uptempo violence that launch you back toward pure death metal. The final few minutes, while stirring, do tend to drone a little bit and perhaps stick around long. But closer “Unveiled” erases any worries as to how the record will end, and this is as emotional and heart-wrenching a song as you’re going to find in the band’s catalog. The song takes its time to set up, with the opening minutes reminding a little bit of Agalloch, before dank soloing, a slurry melody, and purely tortured wails enter the fray and scar this song’s face. The guitar work bubbles over at one point, offering a hint of positivity, and as the record makes its exit, there’s a psychological high from having heard an incredible mental cleansing.

Indesinence haven’t been terribly prolific, but what they’ve given us, especially with “Vessels of Light and Decay,” has been awe-inspiring. This band probably is still a little bit of an unknown to North American audiences, but this titanic album is sure to change that. Hopefully we get music more regularly from this band than we have during their tenure, but as long as what they produce is as good as “Vessels,” I don’t mind if they take another six years. That wait’s sure to be worth it.

To buy the album, go here (will be up soon): http://www.profoundlorerecords.com/products-page/