Fans of professional athletics always hope the young players who come to their team show marked improvement as they careers progress. After all, you can’t expect all rookies to make a giant impact in their first year playing professionally, so a progression over the years, where the game slows down for them and their talents begin to blossom, is what most hope occurs.

Same goes for a lot of bands. Yeah, there always are great debut albums that establish a band as a force, one to tell all your friends about, but that doesn’t always means great things are ahead. Sometimes a band blowing you away with a huge first album ends up with them being the Cam Newton of music, where everything after that is perplexing and weird. Bands that show up, do OK, and slowly get better as time goes on might not get all the instant accolades and “best new music” tags from the tastemakers, but for those of us who follow the journey, it’s satisfying.

I remember getting a copy of Bison b.c.’s “Quiet Earth” in a packet from Metal Blade with a bunch of other albums in 2008. I had heard about the Vancouver band and their penchant for sludgy goodness, but this was my first real experience with them. What I heard was good enough, as they seemed to be on the Mastodon track (which was a good idea at the time) but there was a lot of room for growth. “Dark Ages” landed in 2010, and while it did show some advancement, there was some magic missing, some dark corners that could use filling in order for this band to be what they truly were capable of becoming. Now, two years later with the release of “Lovelessness,” they’ve taken a gigantic leap forward and seem right on track. 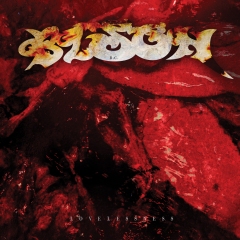 This record is an interesting one for a few reasons. First, the album is made up of only six tracks, the least so far for any of their records, but as you might imagine, the songs are much longer and more involved. But they aren’t pushing time limits just to do it, just to be another one of those bands that sprawl and sprawl on end. Their compositions have an organic quality to them. They sound like they were built quite naturally, and this new personality fits them perfectly. It’s what this band was supposed to be all along. Another major element is Sanford Parker produced this record, and he’s able to help these sounds achieve an atmospheric, open adventurousness, almost like he, too, saw the potential and actually knew how to draw it out.

Bison b.c. have remained relatively intact since their formation in 2006. Guitarists/vocalists James Gnarwell and Dan And and bassist Masa Anzai remain from their original formation, while drummer Matt Wood joined the band in 2011, replacing Brad MacKinnon. It’s clear their songwriting chops have gotten stronger over that time, and perhaps some of that is due to playing together consistently and improving as a unit. Whatever the reason, Bison b.c. have their best record yet with “Lovelessness,” and their future looks incredibly bright. Even for such sludgy dudes.

“An Old Friend” greets you first, with dual lead guitar lines, a Southern-fried approach, and gruff clean vocals amid the growling, making for a nice, purposeful introduction to the album. Then things truly blast off. “Anxiety Puke/Lovelessness” is the first truly aggressive — philosophically — song on here, as it rages for nine minutes and takes on all kinds of personalities. It’s muddy and ugly, it cleans itself up at times, it goes into dusty desert territory, into outer space, then back to the surface, in full gallop, as it races toward its conclusion. This is the song that lets you know things have changed and won’t be the same again. “Last Thing and First Things” also manages to up the ante, letting the music really breathe and float in the air a bit. That’s not to suggest that the song isn’t a neckbreaker in its own right, because it is, but it allows the band to be both thoughtful in their playing and pummeling with emotion. And it ends with a yowl of, “Fuck OFF!”

“Blood Music” is the longest song on the record at 10:45, and it thunders open with a great riff that has a classic heavy metal feel. Through its run, it thrashes and mangles, goes psychedelic and echoey, and has more of the beastly vocals we’ve come to expect from these guys. Of all the songs on this album, I expect this will sound the best live, and it really feels like it was captured in the throes of creation. “Clozapine Dream” comes back to Earth and is the shortest song of the collection at 3:15. It’s their return to on-point bone crushing, and it’s a flat-out nasty cut. “Finally Asleep” ends the collection on a spacious, dreamy note, as strains of classic metal return and they carry you on their back into the night. It’s an effective closer that puts a bloody bow on the collection.

I love where these guys are going and that they seem to be intent to top themselves each time out. Bison b.c. never sounded as good as they do on “Lovelessness,” and these tracks should translate explosively on stage. And if history can be trusted, album No. 4 should knock us the fuck out.

For more on the band, go here: https://www.facebook.com/bisonbc