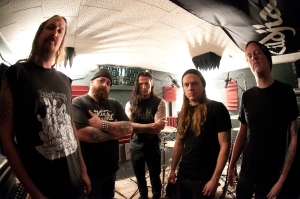 It’s Monday, so you’re probably in a shitty mood. The weekend’s over, you might be hungover, and there are five more days of work until you get any rest again. Also, you had to watch Peyton Manning on Sunday night again. Are all of Denver’s games in primetime this year? It’s excessive.

So yeah, if you’re feeling like garbage, no worries. New band Doomsday are feeling it too, and their first release, a six-track, self-titled affair, might be just what you need to channel your disgust and depression and turn it into something ugly. Not that you should DO something ugly. Kick a trash can or something. Or a wall. Let these dudes handle the violence, which they pour out like disgusting bucket water on this release, that they recorded in six days last December.

While this Doomsday moniker and grouping are new, the dudes who make up this hateful display are well known. Guitarist Jeff Wilson, who we already heard from this year with Chrome Waves and who also plays with Wolvhammer, teamed up with drummer Zack Simmons (Goatwhore) and guitarist Jon Necromancer (Bones) to begin the project, and then they recruited vocalist Zion Meagher (Anti-Human Thesis) and bassist Bob Fouts (Gates of Slumber, Chrome Waves). All members but Fouts, by the way, also are formerly of Nachtmystium which is kind of weird and funny. But I digress. Combined, these five guys managed to jam pack so much hate and violence into this thing, it’s scary.

Musically, it’s a culling all of their forces. The music is sooty and blackened, doom-infested and black metal-fed, and occasionally punk rock-informed. These guys just plug in and destroy you, not paying a lot of mind to technical fireworks and instead simply worrying about bloodying your face and terrifying you with threats you’re pretty sure they intend to see to their horrible endings. If you particularly hate your job and are just dragging yourself around today, you may have had some of these thoughts. There are meds for that.

The record opens with “She Will Be the One,” which is not quite as romantic as you may think. It’s murderous, creepy, and violent, and Meagher hammers home his criminal intent with, “Now she’s gone forever.” Hey, maybe JR Hayes can relax now as he’ll have some company at those lyric criticism conventions. “The Punishment” is grinding and ugly, but it also kind of pokes fun at its subject matter. “It takes a certain paranoia, and you don’t have it,” Meagher accuses about his ability to shed blood vs. those who don’t have that same knack. “Bring Down the Knife” is quasi-catchy, and it’ll be no secret Chris Black (Pharaoh, Dawnbringer) is responsible for the lyrics because they’re so him. This song also has some of the best guitar work on the record, with some damn tasty soloing going on.

“Empty Vessel” is explosive and furious, a dirty black doom explosion where the proverbial shit hits the fan. It’s a punch to the temple and insult to your face. “Black Judas” is fast, the words are howled and growled, and the punk rock influence is felt more powerfully on this one. But as fun as it sounds like this will be live, it’s overpowered by closer “I Kill Everything I Fuck,” a pleasant, down-home little number that’ll sound great at your next family porch gathering. If you’re all convicts and fugitives. It has a loose rock and roll feel and is pretty blistering, so much so you might forget just how disturbing the lyrics and subject matter happen to be.

So there you go. Doomsday. They’re angrier and potentially more violent than you are, no matter what happened in that bullshit meeting that stole three hours of your life this morning. Be happy you don’t have to meet the protagonist of these songs in a prison or dark basement at any point today, otherwise that little meeting you whined about will seem like a birthday party. And don’t even get started on that bloated inbox, because answering those messages is way better than the demons these guys exorcised making this album.

For more on the band, go here: https://www.facebook.com/doomsdaychicago

For more on the label, go here: https://www.facebook.com/disorderrecordings