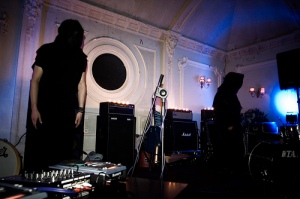 Sometimes being simple and getting right to the point is a better path than being cryptic and overly creative. Say what you mean and get out instead of going in circles and driving people nuts. In that vein, Black Boned Angel could not have done a better job titling their final release, simply called “The End.”

Yes, the New Zealand-based duo of Campbell Neale (also of Birchville Cat Motel, Our Love Will Destroy the World, and many others) and James Kirk (also of Sandoz Lab Technicians, the Stumps) are calling it quits with this project and signaling their end with this final slab of apocalyptic doom drone, and the very-fitting title not only matches the sound of the music but also of the dark knowledge that this thing is over. You don’t even have to think of this music as just being the funeral act for Black Boned Angel. You can apply it to our very existence. Imagine this as something you’d hear while watching an asteroid crash to the surface of the planet, meaning our total demise, and you’d be hard-pressed to argue that this soundtrack is perfect. 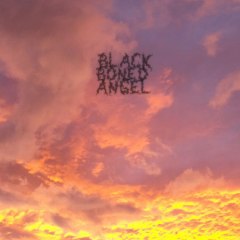 Black Boned Angel have put out a nice slate of releases in their time together, releasing music for labels such as 20 Buck Spin, Conspiracy, and Battle Cruiser. They debuted in 2003 with their first release “Supereclipse” on Celebrate Psi Phenomenon, and over time they’ve turned in quite a few collections, their most recent before “The End” being “The Witch Must Be Killed,” that dropped in 2010. The band’s music, while adhering to similar ideals as bands such as Godflesh (who inspired their name), Sunn 0))) and Nadja (with whom they have collaborated), have their own bend on atmospheric, scary ambiance, and this record is no exception. The sense of finality merely amplifies everything going on.

“Part 1” kicks off with a furious shriek that might rip you out of any comfort zone you set up for yourself. The black doom spills out like tar, spreading itself in front of you and catching you in your tracks, and the somber melodies ensure you will feel the despair and chaos going on here. Sounds rise up that resemble a swarm of end-times horns, and machine-like moaning floods your senses, feeling like a million dying engines choking out the atmosphere with its black exhaust. Drums kick up toward the end of the song, providing some help along your journey, and the haze of ambient drone leads you into “Part 2.”

There, a mystical eeriness rises up so thick you almost can breathe it in, and a liturgical-style chorus slips into the scene to color the background with impending dread. The calculated noises slip in and out over a nice-sized pocket of time, and then chunky sludge riffs erupt, slight piano keys drip like blood from a wound, and an atmospheric spirit appears and guides the song into a truly gorgeous corner, where even definite death and destruction look strangely beautiful. A melody sets itself up and repeats into oblivion, creating a ghostly mood and getting you ready for the dramatic conclusion.

“Part 3” leans right into more thick ambiance, drone swarming, and disarming keyboards that return you to a sense of unease and panic. More not-of-this-world noises and voices move in for the churning finale, voices seem to call out desperately in the distance, and emotional rushes of sounds blend into the picture and layer themselves on top of each other, and the whole things fades out in a terrifying, life-ending assault of drone hiss and thick smoke. And like that, Black Boned Angel are on their way into the afterlife, where their spiritual journey remains uncertain.

Personally I am sad knowing Black Boned Angel will issue no more music, as I’ve long enjoyed their creations and often go right to them in times when I have a ton of work to do and need something to keep my mind going. That said, this final collection of work from the band is an incredible, anguished, cataclysmic album that will stand as a fantastic, emotional last will and testament for one of doom’s great forces. Long live Black Boned Angel, a band that extinguished their own flame when they felt their time was up.

For more on the band, go here: http://en.wikipedia.org/wiki/Black_Boned_Angel

For more on the label, go here: http://handmadebirds.com/