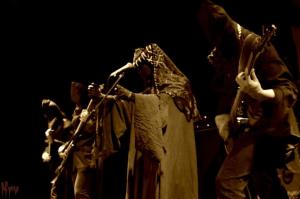 Let’s start the week off on the right note, with a new album from one of modern death metal’s finest, scariest, most inventive acts, Brisbane, Australia’s Portal.

Over the course of 14 years together and now four full-length albums, the band has become one of the most engaging, talked-about, feared, and wondered-about acts in all of heavy metal. You know how people are now trying to dissect Ghost, what they’re about, who is under the hoods? Portal would consider that territory as been-there, done-that, because they were the shadowy figures years ago before that band even was conceived. No offense to Ghost, but Portal created that kind of mysterious wondering.

Long ago, those who champion and celebrate Portal moved past the idea of the group’s identity and instead praised them for what actually matters: the band’s crushing, charnel, suffocating death metal that is blackened to a crisp, comparable to no other bands, and a product of one of the few truly terrifying bands in all of heavy metal. None of this feels like a cartoon ever and instead seems the product of mad men who may or may not be ready to lock you into a noose and drag you through their psychosis. You get that sense something bad really could happen in the presence of Portal, and their dabbling into Lovecraftian and truly horrific ethos is more like discipleship than retelling tales. Sure, you might laugh at what I just wrote. But if you’re not scared as fuck listening to Portal, then you’re doing it wrong. That’s fact. 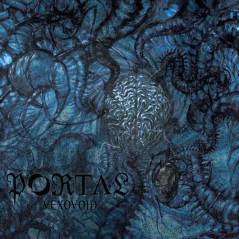 This bizarre unit long has been controlled by frontman/bearer of weird costumes The Curator, who has one of the most distinct voices and sickening imaginations in all of metal, and guitarist Horror Illogium, inventor of some of the strangest, yet most mind-blowing guitar work in modern history. You don’t realize how ridiculously good the guy – and the rest of the band — is until you see them recreate their potions live. Yeah, much of their sound is buried, but not because this group isn’t incredibly proficient. They’re scary good. Rounding out the lineup is guitarist Aphotic Mote, bassist Omenous Fugue, and drummer Ignis Fatuus, who always live up to the terror this band has been creating for so long.

The band’s latest transmission is “Vexovoid,” a record that is somewhat easier to listen to and digest than their previous work. Now, don’t be misled. It is in no way going to be a cinch for a newcomer to pick up this thing and get on board. But if you’ve been listening to Portal for the long haul, you’ll notice a little less interference, a thinner blanket of noise over the album, and the whole thing buried in a shallower grave. Or maybe time has just made it easier for a careful listener to dig through the millions of layers of sound. I guess it could be that.

“Kilter” bubbles up like a fog, with mucky riffs slithering over the song, a grinding motion taking over, and The Curator’s trademark hiss leading the rotting storytelling. “The Back Wards,” a song you may have already heard on some web site or another, is dark, sinister, and dizzying, feeling like a monstrous display of mechanical death. “Curtain” opens with some unusually deliberate drumming, grimy hell rising up to the surface, and a tension that feels like a bungee cord being stretched to its limit so it can fire back and lash you across the face. “Plasm” is rubbery and demonic, with some parts that remind me a lot of “Abysmill” from “Outré,” and the noise spreads to its weird finish, where the song dissolves into fear-inducing ambiance. It’s something that returns later in the record, as well.

“Awryeon” kicks off with a tasty drum beat that, of course, gets swallowed up by the band’s paranoid chaos and mechanic bulldozing. Toward the end, a melodic sequence sets into place and repeats itself over and over, driving you to the brink of insanity. It’s not tedious or beaten into the ground in any sense and instead seems to be trying to capture you via force. “Orbmorphia” has a nice bit of progressive drumming, guitars charging and pulling, piercing leads cutting open the surface, and The Curator lurching his final words of trauma and unspeakable terror. The closer “Oblotten” is a tricky, trippy instrumental that feels like it’s trying to ease you into hypnosis but actually has something far more murderous at its heart. It builds and builds and builds until it starts to fade into a collection of slowly plucked notes that seem designed to make you sleepy. Very, very sleepy. Tick tock. Tick tock.

Portal remain one of the most disturbing, mysterious bands in the world, and their unique form of death metal just grows more obtuse, yet fascinating, as time goes on. They are one of the few inventive bands remaining in their genre and all of music, and while there are millions of pretenders clogging and choking out death metal, Portal always will be here to slice of their heads and reclaim a sound they’ve made their very, horrifically, own.

For more on the band, go here: https://www.facebook.com/PORTALDEATH