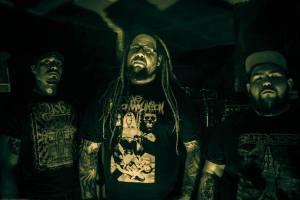 We’re all guilty of being miserable people to deal with now and again. Or maybe all the time. I don’t get those people who go smiling through life, and I think they’re living a lie. It’s OK to feel like things are shit, and if you can’t admit that now and again, then you’re lying to yourself.

Those happy-all-the-time liars probably hear bands like Primitive Man, the new hulking bastard heathens out of Denver and probably wonder what their collective problem is. Can’t they just see the bright side? Can’t they smile? Can’t they just hug a puppy or something and get over it? The puppy thing being great advice aside, the answer is no. Some people have times when they’re overwhelmed and can’t take anymore and just want to know someone feels as miserable as they do. And once again, we round back to Primitive Man, a band of miserable fucks. Or so it seems from their tumultuous debut record “Scorn.” I mean, come on. It’s called “Scorn”!

The band is muddy, mucky, and devastating, and the seven songs on this debut album won’t make you feel good if you’re looking for something to make you all bright and cheery inside. It’s mean and ugly, it’s warped and damaged, and it’s another pummeling signing for Relapse, a label that’s on an absolute tear this year.

But while the band may be new as a unit, its members are not. Vocalist/guitarist Ethan Lee McCarthy plies his horrible trade in the criminally under-appreciated Clinging to the Trees of a Forest Fire and now is wailing away for Withered, while bassist Jonathan Campos (Reproacher) and drummer Isidro Soto (Kitezh) back him up with hellacious noise that backs up the madness lurching out of their singer’s mouth. It can be scary shit at times, and it’s also one hell of a fascinating, cataclysmic record that spills blood in a way that offers no mercy.

The album kicks off with the 11:44-long title cut, one that’s cold, calculating, and chillingly slow for its first half, as the band mauls you with mean, menacing drubbing, and McCarthy sounds like a deranged man who, while completely off his rocker, still has his wits about him. The final few minutes are crushing and fast, as the band hits high gear out of nowhere and shows they can be a total war machine. “Rags” begins its assault right off the bat, punching and bloodying your face, and gurgling vocals rising to the surface and releasing poisonous emissions into the air. That leads to the unsettling and strange “I Can’t Forget,” a song packed with weird, eerie noise, bizarre chants, buried shrieks, and demented lurching. The track is a total nightmare to behold and could haunt you to your core.

Nine-minute “Antietam” is grinding and simmering at the same time, with the band stepping up and mauling you like a hungry bear out of the woods. The sludgy areas even out, letting the band pick up some speed and throw blind elbows at your temples, and it’s a sizzling, violent, extended piece of carnage that drowns out in a storm of noise. “Black Smoke” is similar to “I Can’t Forget” in that it’s an ambient slab of horror, with odd noises, a loop of crazed heavy breathing, and the sense that things are about to go really wrong. “Stretched Thin” is another mauler that’s faster and shorter than most of what’s on the record, but it’s no less effective. Closer “Astral Sleep” picks up the pieces, starting with clobbering doom and relentless feedback before the song hits a crunchy, slow-driven pace. Then, before you have time to think, it gets turned on its head and the crunch and thrash overwhelms. Noise spits out, and the final salvo of aggression proves to be what buries you, driving you as far underground as humanly possible. Just brutal.

Primitive Man’s debut is ugly and terrifying in the best possible way, and they add a much-needed sense of danger back to the metal world. If you suspend your sense of disbelief, you might find yourself convinced these guys are killers, waiting around the bend for you just to exact some revenge on the rest of rotting society gone awry. You shouldn’t feel safe, you shouldn’t feel good, and if you don’t, Primitive Man have done their jobs.

For more on the band, go here: http://primitivemandoom.com/