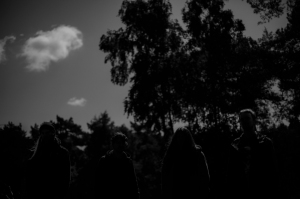 There are few things as satisfying as hearing a band grow up. That’s an odd sentence, I know, but you know what I mean. Hearing a band progress through their time together can be similar to watching someone grow up and become a more mature, aware adult, and as talents the person has you don’t even know about begin to sprout. It can be mind-blowing.

I felt that same wonder and excitement the very first time I listened to “Eros/Anteros,” the latest album from Oathbreaker and the follow-up to 2011’s incredible “Maelstrom,” so much so that as soon as I was finished listening the very first time, I had to go back again. Immediately. And even with all of the other records I have on my plate for review both for this site and elsewhere, I have found time to come back to “Eros/Anteros” with alarming consistency. And every time I hear it again, I can’t believe the leaps and bounds the band has taken, and that’s with Oathbreaker already being an impressive band to begin with. They’ve lived up to that cliche of “taking it to the next level,” as this record destroys walls and boundaries and declares they have arrived. 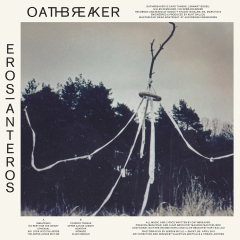 This Belgium unit is hard to really pinpoint as far as sound is concerned. Certainly there is plenty of volcanic, emotional hardcore. There are post-rock and post-hardcore influences. There certainly is a lot of metal and punk rock to be heard as well. But, and brace yourself for this if your mind is closed, there even is a sprinkle here and there of indie rock and even pop tendencies (that’s mostly in the vocals), making Oathbreaker a more well-rounded and deadly machine, one that refuses to adhere to boundaries. They slip so seamlessly into all of these areas as well, making the entire record feel like an organic trip through these emotions on display. The record examine the themes of love, loss, and death in a way you can feel both in the vocals and the music, and by the time the album is over, you can’t feel anything but spiritually spent, yet there you go for the repeat button. That’s the sign of a great band, which Oathbreaker surely is becoming, and a devastating record, which “Eros/Anteros” definitely is.

Caro Tanghe is in front of the band, and while her vocals already were pulverizing, she takes things even further on this album, growling and screaming like her life hangs in the balance, and even singing more extensively, showing a whole new dimension to what she does. Rounding out the band are guitarist Lennart Bossu, bassist Gilles Demolder, and drummer Ivo Debrabanderen and like their vocalist, they find new ways to express themselves, doing so both savagely and delicately. They hit all the right moods, set off explosions when the need arises, and perform like a band not just on the rise but fully realized. This is one awesome record.

The record opens fairly quietly on “(Beeltenis),” which is Dutch for “portrait.” The song contains lines of poetry by Maurice Maeterlinck and trickles slowly into a detonation at the hands of “No Rest for the Weary,” a song with relentless energy and punishing shrieks but also a lot of atmosphere and melody. “Upheaval” slams directly into hardcore energy, with harsh vocals, propulsive playing, and an intent to draw blood. That takes us into a duo of companion pieces, starting with “As I Look Into the Abyss,” a song with a construction that reminds me of Converge and At the Drive In doing battle in a warehouse, and it’s kinetic pace spills right into “The Abyss Looks Into Me,” the record’s first epic track where Tanghe lets loose with clean singing and reminds a bit of Kim Deal in the process. It’s a different side of the band, one that shows they could deliver just a good a rock album as they could one teeming with metal and hardcore, and it’s one of the most impressive songs in their catalog so far.

“Condor Tongue” lets the record rip open again, with a post-hardcore-style act of aggression and speedy savagery that lets the fire burn high. “Offer Aan de Leegte” is slow driving and ominous in tone, and also shadowy and cold as song trickles and chugs into “Agartha,” a gritty and massive song where Tanghe pushes her singing voice again and the light and dark elements are balanced just right. “Nomads” is total demolition from start to finish, a song looking to do as much harm in as little time as possible, with ferocious thrashing that’s as fiery as anything on the record, and throaty growls that sound directed right at you. The band closes with the impressive, 11-minute-plus “Clair Obscur,” which means the contrast of light and dark, something that is a major theme of the record. The song feels rainy and reflective, with Tanghe’s voice buried a bit behind the fog (on purpose to trigger the mood), and as she fades further and further into the distance, the band rises up with a simmering, boiling finish that eventually gives way to eerie noise and a ghostly exit.

Oathbreaker still are at the beginning of their run, yet they’ve already delivered a classic with “Eros/Anteros.” This record is a true epic, one that takes you on an emotional journey and forces you not only to witness their tumult but to examine all the storm clouds in your own life. The fact that this band already is this damn good is frightening, and the fact they easily could surpass what they accomplish here on their next record is enthralling. This is one of the most exciting bands in hardcore, one you can watch develop before your eyes, and years later you might tell the next generation of fans where you were the first time you heard “Eros/Anteros.”

For more on the band, go here: https://www.facebook.com/theoathbreakerreigns?ref=ts

For more on the label, go here: http://www.deathwishinc.com/