Sometimes you have to relax and have patience for good things. You can’t really rush a creative process if the creators behind it don’t want to match your push to have something new in your ears. Sorry about that. But even if you’re left waiting and wanting for a long time, once you get the thing and you’re happy with it, then wasn’t it all worth it? Let creators create.

Power, strength, and tenacity are three qualities you’ll find in Nux Vomica. The band doesn’t have the deepest catalog of all time, with just three full-length records to their name, and we haven’t gotten a new platter from the band since 2009’s excellent “Asleep in the Ashes” (their 2011 EP “Embrace the Cycles” aside). So maybe that’s caused a little itching amongst their fan base that their new self-titled record has taken so damn long to get into our grubby little hands, but relax. It’s finally here, and it’s a gargantuan stomper that’ll make you think and probably hurt a lot. It’s massive, it’s destructive, it’s filthy, it sounds really mean, and it goes to show that sometimes you have to wait a little bit to get great music from a punishing band. 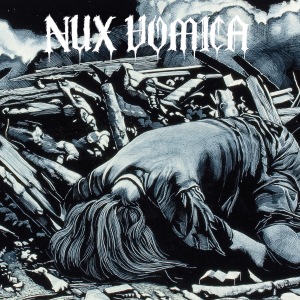 Nux Vomica’s sludge-based doom and death and whatever you want to call it started to bubble to the surface a little more than a decade ago, with their first full-length “A Civilized World” following in 2007. The band kept growing on what they had, continued to build their sound, and knocked people on their asses when 2009’s explosive “Asleep” arrived. It’s funny, but that record still sounds fresh to me, probably because it’s such a different animal from their debut and everything else around it. The record always feels like it has something new to offer me, a twist or nuance I never noticed before. It’s an underappreciated gem, and their new record takes things even further. The fact the band is now on Relapse should raise their profile and have more people paying attention, and if you’re new to Nux Vomica, get ready to have your head caved in by the band’s massive sound.

The band’s ranks consist of three former members of Wake Up on Fire, including guitarist/vocalist Tim Messing, guitarist/vocalist Chris Control, and vocalist/programmer Just Dave. Along with them are bassist Danny and craftily named drummer Zacrilege. On this record, the band delves even deeper into the epic terrain. There are but three tracks on the album, all of them mammoths, and it’ll take a serious commitment to tackle the whole thing in one listen. But that’s how this record should be experienced, as a whole. And like “Asleep,” you’ll find new doors opening, things hidden in strange places, and monsters lurking behind you that you don’t know are there until you’re in their grasp.

“Sanity Is for the Passive,” all 19:48 of it, gets the record off to a powerful start, with feedback swelling, the band mauling you with mud, crust, and death, and a strangely catchy melody lurking under all of that madness. That part of it sneaks up on you, and just when you’re hooked, they take you back underwater again, dashing you with black metal-style guitar work, some well-placed weirdness, and a creaky monologue that’s unsettling. The song finally lets you back up to the surface for its final moments of devastating slathering. “Reeling” is the baby of the group at a mere 11:53, and again, it lets melody and brutality play off of one another. The vocals are savage and fiery, with the band pounding on all cylinders, but then the pace slows and atmosphere enters the room. Clean guitars trickle, shoegazey guitars gets worked into a lather, and dreamy effects give the thing a cloudy ambiance. Before the song draws to its end, the band powers back up again and starts to wail with speed and power, eventually going for a post-punk-style sound as the song reaches its conclusion.

Closer “Choked at the Roots” runs 12:40, seven minutes shorter than the album opener, but in some ways it feels like the most massive track of the trio. Danny’s bass picks up and starts to rumble at the start, as mystical-style guitars create a thick fog through which you must explore the unknown. The song then explodes, with devastating thrashing, wild screams driving into you full force, a black metal feel returning to the melodies, and a sense of unease. The guitars then pick up on a classic heavy metal path, simmering in time-traveled riffs that push you face first into tribal drumming that sounds spiritual and furious at the same time. The final minutes of the song give the band time to do their final bits of pure damage, as they kick up the speed again, slip into a hardcore sense of demolition, blister you with throaty growls and shouts, and eventually let the song burn off as corrosively as possible. It’ll rob you of your breath and your mind, but lucky for your psyche, you’re at the end of the journey.

It took a while for Nux Vomica to get their third album to us, but I doubt they were worried about our patience levels. They took their time, built up their vitriol, and delivered one hell of a record that should get them increased levels of attention and destroy audiences everywhere. This is one mighty force and one of the more punishing records of the year so far. It’s worth your time to lock yourself away and take on this record from front to back as many times as you need it. You’ll be rewarded and damaged more with each listen, which is something you can’t say about every album released these days.

For more on the band, go here: https://www.facebook.com/nuxvomicaband