Remaining a mysterious entity as a band certainly is done for various reasons. There’s the allure of mystery, where you don’t know what’s lurking behind the shadows, thus enhancing the terror. There is the idea that the band members don’t want to be bothered. There even is the possibility that the members have jobs that could be compromised if the veil is raised.

Whatever the reason that Dead in the Manger have kept a low profile and their identities concealed perhaps could be chalked up to one of those reasons. And it’s totally their business, so who is the question them? What matters is their music, and the band’s initial offering is a six-song, 20-minute EP “Transience,” one of the more eye-opening debut recordings released so far in 2014. These musicians all could be members of well-known other entities for all we know, but when they come together, they have a mysterious, unique approach to black metal, grindcore, and experimental ambiance that feels fresh. Admittedly, those styles are all great tastes that don’t always taste great together, but this band makes it work. A recording and band like this could breathe some exciting air into the room, for so many bands these days follow formulas and fall by the wayside. No way that kind of thing happens to Dead in the Manger. 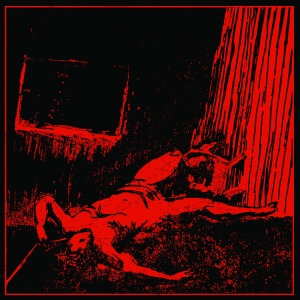 Word is the band is hard at work on their first full-length record that will be available toward the end of the year, but for now, we have these six tracks, named “I” through “VI,” that could give you chills and nightmares. The EP goes back and forth from spacey ambiance that feels like it is taking you on a trip to a dark, suffocating star somewhere, and at others, you are leveled by the band’s violence. But it’s never just blunt and harsh. There is imagination and creativity to the music, as well as the vocal delivery, so you’re not just being bludgeoned by barbarians. You’re made to think and dream, even if those mental excursions take you to places that terrify you. It could sicken and destroy your psyche if you’re not ready for it, or maybe such experiences would be good for you and sober you to the terrors surrounding us.

The first cut “I” has clean guitars, buzzing noises, and swirling ambiance that washes over everything, and creepy, whispery voices that add an essence of eeriness and frozen harshness. Growls eventually roll in, melodies rise, and cymbals crash, and then it’s right into “II,” that immediately injects speed into the proceedings. While there are elements of grind and black metal here, the guitars also have a proggy, thought-provoking edge to them. I found myself following along with every aspect of the song because so much was going on, and all of it was causing my synapses to fire. Same can be said for “III,” where guitars travels all over the place, as if trying to construct an invisible nerve center that constantly pulsates, and while there also are some airy, breezy moments that allow you to breathe, there’s just as much cerebral damage, as well as cries of, “Sacrifice your soul!” that sound threatening and real.

“IV” has a chugging start, with guitars spiraling, melodies mashing and bashing, and vocals spat out to match the rhythm of what’s going on. The guitars clean up a bit, and noise trickles along with everything, while the shrieks return at full intensity. A boiling cauldron of guitars takes the song to its finish. “V” is bathed heavily with noise and a vocal sample that loops its way through the song, giving it a chilling, mysterious vibe that’s hard to shake. The track takes things back to the cosmos, and the hazy composition gets in your head and refuses to leave. Closer “VI” pours out pure brutality from the start, with harsh growls and tricky guitars that could have you tilting your head while you bang is relentlessly. Some clean playing returns to smear color into the murk, but the drums then rise and clobber, the final growls intimidate and maul, and the song fades into a bed of sound that gives you temporary respite before the band returns later this year.

Dead in the Manger is a promising, interesting band that should soothe what ails anyone who is at a loss for inspiration from the current crop of artists. It’s also another smart, heads-up signing by 20 Buck Spin, who have brought us a slate of challenging bans such as Oranssi Pazuzu and Atlantean Kodex. “Transience” enthralls and captures the imagination from the start and never releases its stranglehold once. I’m excited to hear what this band will do with a full-length piece.

For more on the band, go here: http://deadinthemanger.com/

To buy the album or for more on the label, go here: http://www.20buckspinshop.com/

There are tons of releases we didn’t get to cover in full this week, so here are a few more records you might want to check out that provide us plenty of enjoyment: 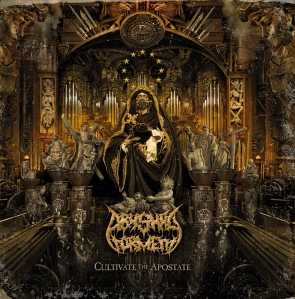 ABYSMAL TORMENT, “Cultivate the Apostate” (Willowtip) – If you like your death metal rotting and disgusting, the Malta-based Abysmal Torment could be perfect for you. Brutal death, sludgy punishment in spots, and downright scathing vocals that go from growls to squeals all are here in abundance. If you’re a fan of Willowtip’s collection of brutal death bands, you’ll be right at home with the group’s third record and follow-up to 2009’s platter “Omnicide.” It’s not pretty, it sure isn’t slick, and the record might have you checking the bottom of your shoes to make sure you didn’t walk into the pool of blood these guys surely left behind. Another killer signing by Willowtip, who never steer you wrong.

For more on the band, go here: https://www.facebook.com/abysmaltormentofficial

For more on the label, go here: https://www.willowtip.com/home.aspx

SO HIDEOUS, “Last Poem/First Light” (Prosthetic) – Here’s an interesting one and another neat pick-up by Prosthetic Records, who really have stepped up their game the last couple years singing interesting acts that push boundaries. This Brooklyn band has been kicking around since 2008 (and formerly were known as So Hideous, My Love…) refining their sound that’s based in black metal but doesn’t end there. They cite composers Phillip Glass and Arvo Part and even get a hand from The First Light Orchestra on full-length debut “Last Poem/First Light,” making it one heady experience. Symphonic-based black metal (not the cheesy kind), post-rock tendencies, and eerie ambiance combine to make a great storm immersed in fresh ideas. And chaos.

For more on the band, go here: https://www.facebook.com/sohideous

SCHAMMASCH, “Contradiction” (Prosthetic) – Speaking of the progress Prosthetic has made bringing us challenging new acts, “Contradiction,” the second record from Swiss black metal band Schammasch, is a damn interesting one. You certainly can hear that countrymate Tom G. Warrior grabbed their ears, but they also have some Ruins of Beverast and classic Behemoth to them, as well as ancient elements and other mystical powers. This is a weighty record at nine tracks, 84 minutes, and two discs. It’s quite a journey, and a very dark one, though even at the long running time, the thing is bound to keep your attention and enrapture your senses. Dark spirits, strange auras, warbling vocals, adventurous music, and a sense of eerie unrest dress this record that should find favor among those who like their black metal stretched into space.

For more on the band, go here: http://www.schammasch.com/

DEATH, “Leprosy-Reissue” (Relapse) – Relapse’s ongoing project to reissue the Death catalog brings us to the band’s awesome second record “Leprosy,” a pure death metal calling card before the band started to delve into more experimental and progressive tendencies. This record is mean and brutal, rising out of thrash metal’s dominance and into a world even more dangerous. Originally released in 1988, this album sounds as vital and explosive today as it did then, and Alan Douches does a fine job remastering this classic slab of essential death metal. There also is a second disc of rehearsal takes of some of the record’s songs, and if you jump early, Relapse has a special 3-disc collection that includes a live set. This is must-have stuff for any death metal fan.

Key tracks: Every one of them

For more on the band, go here: http://metalcrusade.org/