Writing about music all the time and indulging in each aspect of that subject matter regularly sometimes takes you outside of what real people know about this stuff. That’s a weird sentence, but what I mean is there are things that are commonplace for me, such as owning an operating record player and still buying and listening to cassettes, that are gigantic surprises for some people when they walk into my music room.

That’s a long-winded way of saying that we’re going to be talking about cassettes today, but I think the point stands. There are many people who don’t know the medium still exists and that tapes are bought regularly by some people. I just moved recently, and I was putting my collection of tapes in alphabetical order in my cases, and I was surprised by how many recent releases dot the lineup. So I’m one of those people, and labels such as Sol y Nieve keeps that collection growing with their myriad releases. We have two of those today to discuss, and while you can have either digitally, holding this cassettes in my hand, hearing them rattle inside their cases, took me back to summer raiding the tape bins at Hills and Kmart trying to get my hands on any metal releases I could find. All hails to Sol v Nieve for keeping the format alive and continually finding great artists with which to work.

First up is Essene, a really interesting, peculiar band hailing from Kansas City. I can tell you almost nothing about the band as they really don’t have a social media presence, Metal Archives has nothing on them, and they only have a shadowy Bandcamp page to give you any hint. No matter, because what counts is the music, and their weird, bending take on black metal on quite interesting and really doesn’t sound much like anything else out there (your closest comparison is Bosse-de-Nage). The band’s music can be jangly and post-punk in spots, a little bit indie rock in others, and full-scale, gruff black metal elsewhere. Their demo, originally released in autumn 2013, now is out on pro-dubbed, pro-printed cassette in a limited amount of 100 that are hand numbered. It’s a really nice package, with a sturdy in-lay card and a great-sounding tape. I’m always one to eschew digital for physical, so if this sounds like your thing, put down some cash and get something you can hold in your hands.

The tracks are untitled, though they get Roman numerals on the band’s originally digital release, so we’ll go with that. “I” twists and churns, with guitars ringing out and racing, the drums being pelted, and even a surfy vibe to the whole thing before it tears into blackness and fierce vocal rants. It’s moody and strange and spills into “II” that has a similar guitar style and is fairly unhinged. The growls are harsh, as the pace erupts and goes into overdrive, with liquid melodies, passionate wails, and an atmospheric twist that eventually chimes out. “III” trickles from the start and sounds cosmic, with a weepy haze taking hold and a move deeper into tranquility. Then, the closer “IV” tears open like a summer storm, punishing with gazey guitars, strange and echo-rich guitar work, and a cascade of sound that builds and builds, finally dissipating into a strange fog. Essene is a band that has its own vision when it comes to black metal, and further developments from this project are highly anticipated.

For more on the band, go here: https://essene.bandcamp.com/ 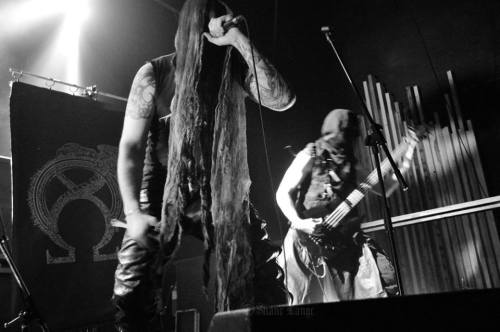 The second album is by Vancouver black metal squad Kafirun, a band with which we visited earlier this year on their monstrous “Glorification of Holy Death” EP. That independently issued mauler sure opened our eyes and took us back to their 2014 demo “Death Worship” that preceded it. Now, Sol y Nieve is giving cassette treatment to that demo (same type of details as the Essene), giving beastly, meaty new life to these three songs that will smother you with filth. The band takes on pseudonyms with Luzifaust on vocals, Hanephi on guitars, Hypnocrotizer on bass, and Corpus Vile on drums, and this demo recording provided a first glimpse into the band’s warped, volcanic world of black metal that’s anything but by the numbers and could leave you totally brutalized when all is said and done.

Things start off with “Beyond the Flesh Vessel,” a weird, damaged track that spirals and leaves you dizzy after just a few minutes. The vocals go from titanic howls to throat-buzzing agony within seconds, splashing you with the reality that things are different in their world and they’re not going to do anything to make it more comfortable for you. “Death of All Man” should not be too hard to comprehend just from its title, and as promised, this thing hammers you with violence. The track rips right open, with the riffs causing havoc, harsh shrieks emanating and chilling, and an ominous vibe swimming through the center of this cut. The guitars sear and then cause your skin to go cold, while the infernal vocals provide a breath of fire from below, later turning into hypnotic chants that the music wraps around and sends into the stars. Closer “Thousand Spears” punishes from the start, lacing you with punches and letting the vicious growls spill over you like locust. Things hit a vortex, with the guitars chewing at you and the vocals dissolving into weird cries of agony. The back end is raw and furious, eventually giving way to a clean finish that finally gives you a drink of cool air. Kafirun’s might already is well known on this site, but it’s nice to finally dig into their origins and find the band’s first blast of terror.

For more on the band, go here: https://www.facebook.com/KafirunBand

For more on the label, go here: http://www.solynieverecords.com/