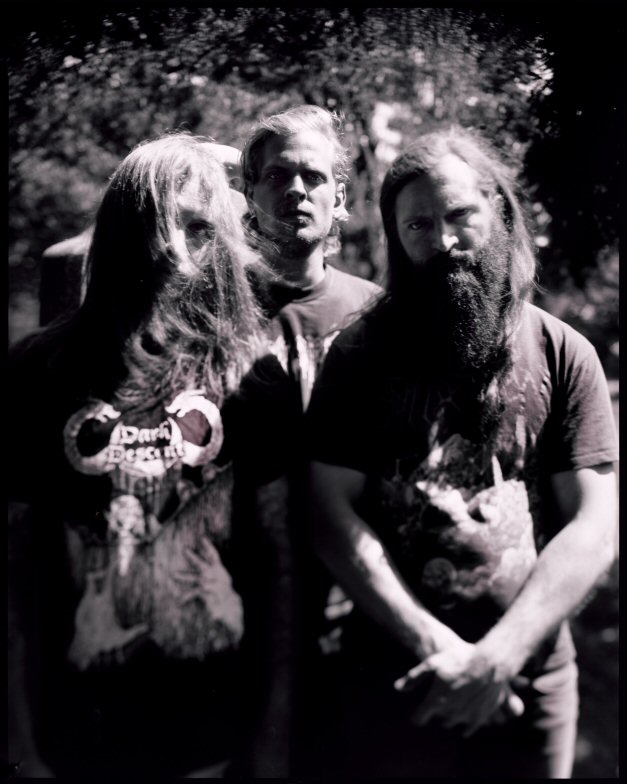 A record of honest, ugly, gloopy death metal that sounds like machines fighting and beating each other until they melt really is what is needed right about now. It’s one of those weeks where work is demanding a cut-off from the world, no one annoying or interrupting me, and delving into the nastiest thing possible to devastate my ear drums.

So all week long, while doing myriad projects and putting out several proverbial fires, the new full-length from Danish monsters Undergang has been destroying me. “Døden Læger Alle Sår” is the third offering from these Copenhagen-based beasts and their first since 2012’s “Til Døden Os Skiller.” It’s filthy, grimy, heavy, brutal, gross, you name it. This music isn’t out there trying to score style points, and chances are, this never is going to be taste-of-the-week material among those people who decide those things. But for bloody, muddy death metal that really hits the spot when you want something violent and outright monstrous, you can’t go wrong with this record.

The band is a three-headed assault led by guitarist/vocalist David Torturdød, bassist Ondsind, and drummer Anders Dödshjælp, and their music trudges more than it speeds. The 10 cuts on this new record keep slamming you face first in the mud, rolling knees over the back of your neck, and only let you up long enough to repeat that insulting, painful attack. Torturdød’s vocals are more like a lurching gurgle, making it sound like he’s spewing forth some disgusting, blood-infested mucus as he tells these horrible tales. The music isn’t polished but has plenty of muscle and brute force to keep you sustaining painful bruising again and again. Super fun stuff if you like your death from a cosmic swamp.

The opening title cut is a quick one—just under two minutes—that lifts the lid just right, with brutal growls and blistering death metal that pours into “Jomfrublodbad.” There, smeary death, gurgly growls, and absolute devastation take hold, delivering a consistently meted-out assault that bashes and jars. The track has a bit of a Demilich feel (maybe the vocals make me think that) that mashes right up to the final note. “Kronisk Betændelse i tarmene” drubs and dizzies, with Torturdød sounding like he’s struggling with a throat clogged with sinus discharge, gagging and snarling all the way. The band blasts forward, with a renewed sense of carnage that runs headlong into “Ad Ligbitum” and its chunky riffs and mega-thick basslines. The band stomps and flattens, with the vocals feeling guttural, and the final slower moments let them thrash with a grind. “Radbrækket” is savage and uglier still, with the band pounding away at you and doing so in a way that you feel every blow. The track is ominous and churns like an engine, giving off smoke and torment.

“Lemlæstelsens Kunst” is mauling and murky, simmering in the mud until the track bursts open and pushes harder. The music burns and the vocals bubble up, like a lava of plasma breaking through the surface. “Kogt i Blod” has off-kilter, bizarre guitar work that hammers the senses as the music sprawls and starts to take over your mind. Like what preceded it, the music is oppressive and meaty, with the band doing its best to keep you suffocating. “Gravrust” smears sooty insanity in front of you, with the vocals gurgling in Torturdød’s throat almost as if they’re going to choke him to death. This song contains more body blows and mental abrasions on top of the ones you’ve already sustained. “Dødsfald” finds new ways to unload smudge and filth, with abject fury weaved into the swamp-bound death. Closer “Det-Gør-Kun-Ondt-til-du-dør” is the longest track on the album at 7:36 and starts by making your head spin with their rubbery guitar work. The band isn’t any hurry to seal the deal, piling on waves of horror that accumulate on top of your chest and leave you heaving for air. The band also flashes some different tricks in the record’s final moments, as some burning soloing tears its way out of the dirt and weeds and takes the album on a glimmering high that you likely won’t see coming.

This stuff won’t go down easily, it’ll taste like clumped, disease-ridden blood, and you’ll likely be retching in pain when it’s all done. But death metal should make you feel that way sometimes, right? It wasn’t designed to be pretty, and Undergang keep things awfully chaotic and crushing on “Døden Læger Alle Sår.” This is the perfect thing to go with having a week when you want to throw a sledgehammer through a wall.

For more on the band, go here: https://www.facebook.com/undergangktdm