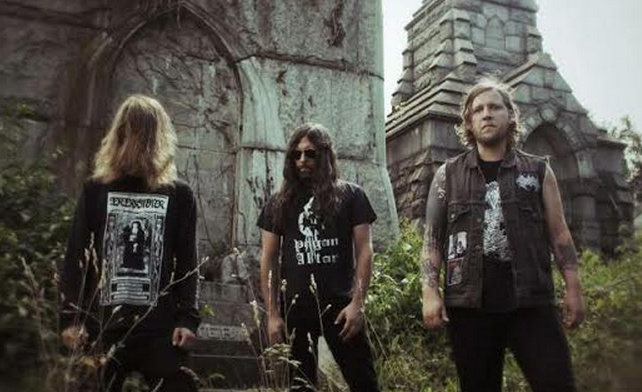 The saying “not for everyone” often can be applied to many death and black metal bands that take things to the utter extreme. Yeah, yeah, people all into their Best Buy-purchased metal albums probably think they have some pretty hardcore tastes, but there are plenty of bands and records that would scare them right back to those big-box stores for something safe and secure.

Like, take one at the cover art for Pissgrave’s debut record “Suicide Euphoria” while eating lunch. Especially if you’re having something gravy-based. Still hungry? Didn’t think so. It might be the grossest album cover in Profound Lore history. But despite that pile of bones drowning in brown goop that may or may not be shit, don’t expect a gross-out album. But definitely anticipate something as unsettling and depraved as that cover art, because the Philadelphia-based death metal band’s brand of chaos is something that would scare the hell out of most people first time they heard it. Same could be said for those who think SLAAAAAAAAYER is the most intense thing on the planet. Those days are long gone, friend, and more perverse, dangerous inhabitants have moved into the neighborhood. 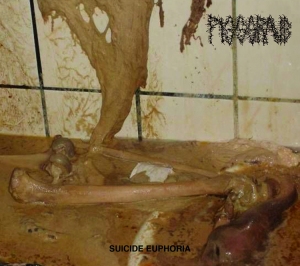 Pissgrave had but a self-titled demo to their name before their first full-length that’s being released via the mighty Profound Lore. Still, their sound and live show developed a reputation, enough to land a tour with Greek death squadron Dead Congregation, and as we can hear on these horrifying nine tracks, their rumblings that accompanied this band were not hollow. This band—guitarists/vocalists Tim Mellon and Demian Fenton, bassist Johannes Van Haethen, and drummer Matt Mellon—have carved out a cesspool all their own, where their dark vibes and relentless chaos form a poisonous gas could rise above and sicken everyone in its wake. This band is utterly violent, and while the cover could be called something of a shock tactic, all they lay out before you is their profane fury that is raw and unclean.

“Perpetual War” kicks off like an eruption, with monstrous vocals that sound not of this parish, a completely crushing assault, and guitars that wail out and create non-stop terror. The pace is relentless from front to back, setting the scene perfectly for what’s next. “Impaled Vibration” has guitars buzzing like chainsaws, with a chugging, mauling approach and a dizzying, suffocating environment that will make it feel like not enough oxygen is getting to your brain. The riffs absolutely reign, and the vocals are unforgivably infernal. “Pain Enchantment” surges viciously, with the vocals coated in abject terror and the tempo catching fire and blazing out of control. The music boils, intending to melt off faces, while shrieked soloing wails out at the end, lacerating the song with a blunt end. “Field of Scattered Bones” actually starts sounding fairly up front … well, for Pissgrave. The song takes a doomy turn, with the vocals bathing in noisy filth, and later the band launches into a fury and starts rambling ahead with reckless abandon. Caustic sounds blind you, as the song eventually slips away. “Prevail in Hell” is molten and ashen, just like the title suggests. The guitars sprawl out of control and violently toward you, while the band keeps piling on, the drums are completely decimated, and a choking cloud of smoke encircles everything in its wake.

The title cut is smearing and terrifying, with a massive offensive launched that promises nothing but total obliteration. Sounds churns, your will is tested, and before you know it, it’s over. “The Second Sorrowful Mystery” is chunky and thrashy, with the walls crashing down around you, and a psychologically marring attack unleashed. The guitars wail out of control, like a loose saw blade soaring recklessly through the air, and fire-breathing pounding leads to the final gates. “Mass Cremation” is as infernal as expected, making it feel like human ash is swarming through the air and choking lungs all around. The tempo is sweltering, while the vocals are wildly unleashed, and the last moments are suffocating and severe. Closer “Blood Fog” splits open, letting loose a wave of horror and crushing with evil intent. There isn’t room to breathe, as the pace switches up later to a more doom-ridden path, with the misery raining down and the band blasting you straight in the face. Once it finally loosens its grip, you might feel a sense of relief, but the torment you faced is forever.

Pissgrave’s brand of death metal is foul and bloody, and they go a long way toward proving they are a band that deserves the attention of any listener with the guts to hear them out. They’ll never be on an end cap of your local electronics shop, and chances are you won’t see masses of people wearing their merch. Like any of that matters. “Suicide Euphoria” is a massive, smothering debut record from a band that could be laying the foundation for ugly underground death metal into the future. This type of death is all that matters.