Misery can feel cavernous, mostly due to the fact that you can feel like you’re locked in a cave of sadness and woe that feels impossible to climb back out of. That’s why funeral doom, when done right, can capture these feelings perfectly and encapsulate you in a wall of horror.

Seattle’s Un fall into that category. By the way, trying to search Un on social media platforms and on Google is a pain in the ass, but I digress. Their debut record “The Tomb of All Things” is a five-track mammoth that indeed hammers home that feeling of desolation and loss. They deliver slowly moving, darkly emotional creation over this opus, another exciting band here to freshen up the ranks of the entire doom world. What they do isn’t necessarily groundbreaking or anything, but it really doesn’t have to be. This is honest, true, dreary metal that feels like it brings with it an ocean full of anguish and devastation. 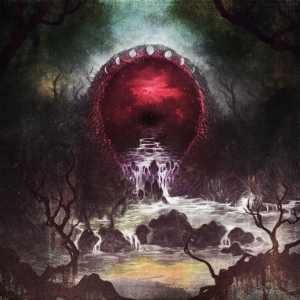 Un formed just three years ago, and since that time, they’ve put out a couple of demo releases before combining together to create “The Tomb of All Things.” The band currently consists of guitarist/vocalist Monte McCleery (also of the great Samothrace), guitarist David Wright, bassist Clayton Wolff, and drummer Andrew Jamieson, and they’re already proving to be a formidable force. Certainly what they do has its ugly corners. But there also is plenty of atmosphere and melody to be had, so it’s not just a run-of-the-mill funeral doom record. That’s one of the things that makes this record so refreshing.

“Epigraph” opens the record, a brief introductory track built on serenity, clean, trickling sounds, and a sense of mourning. That leads to “Sol Marasmus,” a slow-driving, scraping helping of darkness dressed with throaty growls and gurgling power. Conan’s Jon Davis joins the fury on this one, with his howls mixing in with McCleery’s, and from there, the music goes into glimmering corners and through muddy bursts. The very end of the song gets watery and mystical, with an infusion of atmosphere and a slow fading away. “Forgotten Path” begins with a fury, opening volcanic doors and letting in the punishment, but then the sadness returns, and the pace slows down. Growls finally arrive about halfway through this 13:43 journey, with glorious melodies following and menacing vocals bubbling to the surface. The track continues unfurling and revealing new colors, at times sounding a bit like Pallbearer. Really strong track that never relents until the end arrives.

“Through the Luminous Dusk” opens with spacious melodies and frosty, anguished wails, trudging along a pained, bloody path. The music always moves and penetrates, with cold, shimmering guitar work gnawing at your senses, then the soloing tearing open and ripping a hole in everything. The portion has a classic metal feel and injects some nostalgia into the scene, and then the vocals bleed back in again, with the band pulling you underground with them. The closing title cut takes some time to build its momentum, leading you into mournful waters and total darkness, rocking you back and forth before the pace bursts open. The vocals are menacing and slithering, while the lead guitar work unleashes its power and completely mesmerizes. The track erupts again, as the band pounds away, the vocals wrench, and the melodies gush gazey emotion, letting the embers burn brightly one final time before the darkness returns and swallows everything whole.

Un’s debut record brings the band into the conversation of those groups who are keeping funeral doom interesting and, perversely, alive. “The Tomb of All Things” is a really expansive, interesting record, and it’s one of those bright spots at the end of the year. Un is planning a full-out live assault next year to support this record, so if this is your thing, go out and experience their power in your face.

For more on the band, go here: https://www.facebook.com/unvibes

For more on the label, go here: http://blackbowrecords.com/