I’d never done battle with a barbarian or wiped the blood from the blade of an axe into the grass, relishing another successful battle. Those days were kind of before my time and all, though it’s pretty cool to see all that take place in movies and such. But I’m hardy battle tested. I’d probably fold like a whimpering card table.

I’m not certain the fellows in UK doom unit Conan have waged wars either, but you wouldn’t exactly know that from taking on their crushing, bone-bursting music that they’ve made for the past decade or so. In fact, since 2012, the band has launched three punishing full-length records that have solidified their standing among underground fans and have made them one of the most exciting, reliable bands in all of metal. Now, with 2016 under way and starting off really strong, Conan are contributing to that massive wave with their great third record “Revengeance,” a title that might not be topped all year long. How do you beat that title? Just saying it gets your blood running, and that’s before you even dig into this six-track, nearly 48-minute monster. 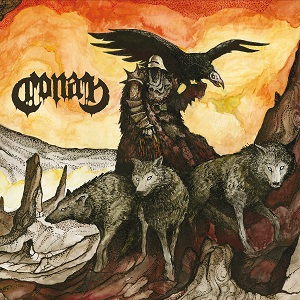 After some starts and stops at the start of their run, Conan released a few EPs before making their impactful full-length debut with 2012’s earth-blasting “Monnos.” That madness spilled over into 2014’s “Blood Eagle,” a record that solidified their penchant for mixing the roots of doom with a modern, smothering sound that unites every era of the sub-genre. The band–its current lineup boasts guitarist/vocalist and original member Jon Davis, bassist/vocalist Chris Fielding and drummer Rich Lewis–also have carved out quite the reputation for their live show, where they bring the heaviness of their records and amplify that to ridiculous volumes. I listen to a ton of doom, and Conan without a doubt are one of my favorite bands of that ilk going today.

The record erupts with “Throne of Fire,” a track that tells you all you need to know in its name and that gets charged up right away. The vocals howl with fury, while the bottom end rumbles heavily, and each verses pulverizes you. Gruff growls later emerge, as the tempo of the song pulverizes, clobbering you into unquestioned submission. “Thunderhoof” rumbles from the the get go, with Davis and Fielding both wailing over the devastation, and the pace of the track lumbering along. It will feel like you’re stuck underneath a stampede of warriors as the song progresses, with the guys bashing away and turning bones to dust, and the final moments stretching out the gargantuan punishment. “Wrath Gauntlet” also begins its assault right away, with the guitars bubbling up and later smothering, and the rhythm section trucking monstrously. The vocals at first are forceful cries and later burning growls, and the playing reminds of great mastodons butting heads, clashing like there’s no tomorrow.

The title track follows, a piece that spits noise as it begins and is faster and more aggressive than a typical Conan track. This is an altogether new type of thing for the band, as the vocals are wild and abrasive, the band bludgeons with even greater might, and they sound downright furious and violent. The drubbing goes on and on, leaving you no room to breathe, until it finally fades out in a bed of drone. Holy shit, man. “Every Man Is an Enemy” settles in a field of feedback, with a doomy groove settling over like a storm and the vocals howled. Then we sink into a psyche-heavy, spacey section, playing games with your mind before the devastation comes again. The words are belted out with aplomb, and the back end of the track blows sparks and then bleeds away. Epic closer “Earthenguard” runs 11:44 and develops slowly, taking its time to stretch its muscles. As you’d expect, the track is muddy and smashing, with some trippy guitars washing in and giving the track a bright sheen, and the pace sweltering dangerously. The band lets the whole thing come to a clobbering high in the final minutes, with the guitars gurgling, the assault coming unhinged, and the track surging dangerously before fading away.

Whether or not they’ve waged wars with minotaurs or stared down great beasts, Conan’s music makes it sound like they’ve got the scars to prove their savvy on the battlefield. “Revengeance” is another bloody building block in the band’s punishing campaign, and with each record, they just get better. As long as we have bands such as Conan around doing their thing, doom will remain healthy, heavy, and absolutely deadly.

For more on the band, go here: http://www.hailconan.com/

For more on the label go here: https://www.facebook.com/napalmrecords

One thought on “PICK OF THE WEEK: Conan remain as barbaric and devastatingly heavy as ever on ‘Revengeance’”