If there’s a pain point to doing this site, it’s that the albums tend to seriously pile up during heavy release periods. Holy shit, do I have a ton of things that I want to write about but just can’t find the place to devote an entire day to each. I know. There are real problems out there.

Anyway, I have four records today–two by legendary bands–that I really want to devote time, so I’ll do so in tidy, smaller form. Any of these four records are worthy of your time, and depending on the style of metal you like, there’s bound to be something here that will resonate with you. So let’s get going here so I can shut up already with this set-up.

First off, the new thing in metal, apparently, is waking up one day and finding out an awesome band has released a secret album. Krallice has gotten us twice with that scheme, the latest being their massive new EP “Hyperion,” and former labelmates Dawnbringer now have gotten in on the action. The Chris Black-led project dropped their excellent “XX” EP last week on their Bandcamp page, and is this collection ever awesome. Five tracks packed with their trademark classic metal style dash this thing, and I have listened to this pretty much on a loop ever since the thing was available for purchase. It’s as good as anything in the band’s canon, and these tracks are anthemic pounders that will make your blood surge.

The record has an unexpected start with “Why Would You Leave Me?” a track that starts off like a power ballad before the power kicks in and dusts us into the awesome “Into the Maze.” This track tears open, sounding like classic Dawnbringer, with the riffs ruling, the bass pumping, and Black’s authoritative vocals powering the track ahead. “North by North” is the longest track at 7:06, a song that starts with a folkish feel before it thrashes in a calculated assault. The song’s chorus has constantly changing words, but its melody is constant and etches itself into your brain. The track rivets and punishes right up to its group-led “ah-ah-ah” chants that end the thing. “Earth” boils, has great leads, and really gets things going, but then it ends kind of abruptly. It feels a little premature, but it’s fun while it lasts. “The End of the Beginning” is the glorious instrumental closer, a song that sounds born to be entrance music for a top draw in New Japan Pro Wrestling and bristles with power right up to the final moment. The EP is a ridiculous amount of fun.

For more on the band, go here: https://www.facebook.com/deathofhunger

Anthrax have had a really interesting run. Ever since their “Fistful of Metal” debut in 1984, they’ve been one of the forerunners of thrash metal and pretty much have become a household name. One of the bigger stories surrounding the band is their turnstile at vocalist, with Joey Belladonna and John Bush their main voices. As someone who grew up with the early incarnation of Anthrax, I’ve always had a soft spot for Belladonna, and he is in command on his second record back since his return “For All Kings.” Look, it’s not a perfect record. There’s a three-song stretch in the middle that’s kind of bad. But other than that, it’s a strong late-era record from a band that still has it.

Following the moody intro cut “Impaled” that practically begs for opening credits to roll, we get into “You Gotta Believe,” a blistering dose of thrash goodness that is a fun listen with a strong chorus that should go over well live. “Monster at the End” is melodic and chunky, with Belladonna sounding in really good voice. The chorus pulls, and may be the best one on the record, and this leads into the title cut that also is pretty strong work. I noted a weak mid-section of the record, and that comes on the stretch starting with “Breathing Lightning,” its follow-up “Breathing Out,” and “Suzerain” that just feel flat. Things pick up on “Evil Twin” that also should be a live staple and has the most obvious link to their classic era; “Defend Avenge” is a nice dust-up; and the closer “This Battle Chose Us” is actually damn heavy and catchy. Look, it’s not a classic album or anything, but for Anthrax in 2016, more than three decades in, this is a strong effort. And it’s going to beat the hell out whatever Metallica gurgles out next.

For more on the band, go here: http://anthrax.com/

For more on the label, go here: http://megaforcerecords.com/ 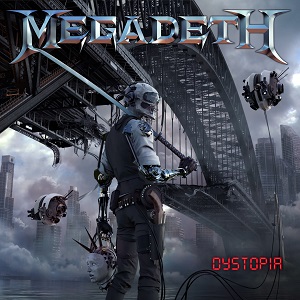 Speaking of the Big Four, Megadeth have pretty much rambled on with very little inactivity since their “Killing Is My Business … And Business Is Good” debut in 1985. They’ve pretty much been a revolving door of cast members, though, with Dave Mustaine the only constant, and things seemed really bad when they released their awful last record “Super Collider.” But “Dystopia,” their 15th album, finds another new Megadeth lineup, but one of their strongest in years. Mustaine and long-time bassist Dave Ellefson are joined by guitarist Kiko Loureiro (Angra) and drummer Chris Adler (Lamb of God) to produce one of the finest Megadeth records in several tries.

The album has a nice four-song run at the front, starting with “The Threat Is Real” (including Middle Eastern-style female vocals mystifying) and the band totally launching into things. Mustaine’s vocals sound grim and pointed as ever, the chorus bashes, and the guitar work floods over top, sounding ever so fluid. “Dystopia” sounds like classic Megadeth, with excellent playing and a chorus that is razor-sharp and well-delivered; “Fatal Illusion” is striking and heavy, thrashy and fiery, and a really stellar song; while “Death From Within” fades in, striking hard from the start and showing us even more flash via the new partnership of Mustaine and Loureiro. As the record goes on, it has its ups and downs (clunky “Bullet to the Brain” could have been lopped off, while “Post-American World” sounds like they’re ripping off their own “Symphony of Destruction”; yet instrumental “Conquer or Die!” is strong, “Lying in State” demolishes, and their cover of Fear’s “Foreign Policy” is charged up). Venomous and political as ever (I purposely left out Big Dave’s politics; I want to concentrate on the music in such a short space), Megadeth sound revitalized. If this lineup can stay together, this could be the start of a nice run for the band.

For more on the band, go here: http://www.megadeth.com/

For more on the label, go here: http://www.universalmusic.com/ 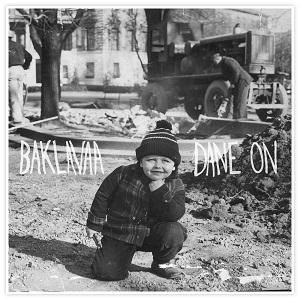 We don’t do a ton of noise rock around here, and I’m not really sure why that is. But we’re breaking that a little today by discussing “Dane On,” the debut full-length record from Baltimore’s Baklavaa. The latest entry from the always reliable Grimoire Records, this band piles on the gritty goodness that might remind some of the Jesus Lizard, Sonic Youth, or even the North Atlantic, and this is a punchy, dizzying, warped record that can disorient but always delivers the face-bruising goods.

Over 12 songs, this band–Ted, Flynn, Dominique, John–makes a dizzying, channeled assault that gets noisy and blaring on killer opener “Candy Cane” that has some cool vocal melodies, yowls pushing in later, and an intensity that builds along with the song. “Ointment,” the featured song from the record so far, is trippy and abrasive, with talky singing, some slurry parts, and a finish that just crunches. “Tampered With” has a slow-driving menace to it, with shouts of, “I hate myself!” settling in amid the smudgy playing and deranged bursts. The dual “Gold Candier” tracks are cutting, with the first a snarling helping of post-hardcore haze, only to give way to the more aggressive, sinewy second half. The highlight for me comes later on with “R. Plastic,” a maniacal song that has an old hardcore feel and bloody tongue-in-cheek wails of, “Spend money on me because I’m worth it.” That line certainly can be applied as the tagline for this entire record.

For more on the label, go here: https://www.facebook.com/GrimoireRecords/