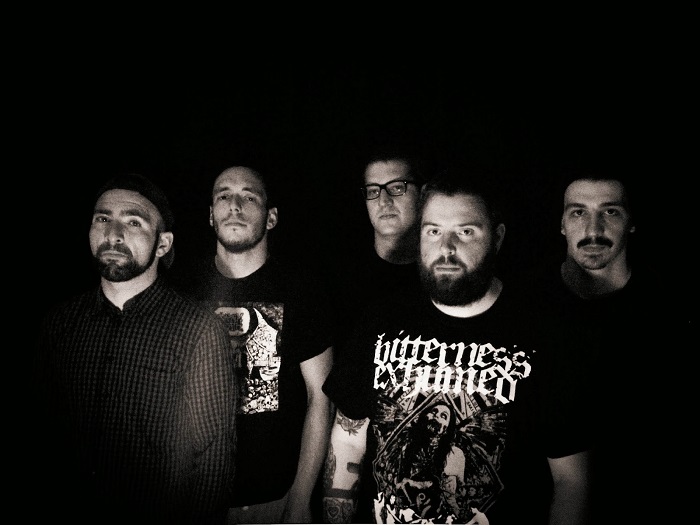 Do you remember that old show “When Animals Attack”? Talk about a collection of some of the dumbest humans completely devoid of any sense as to the moment where they’re fucked. Then the assault comes, the cameras catch the horrors, and it is used for entertainment for people at home. Who can blame the animals, really, as they’re just reacting the way they would naturally?

While they may not be animals, the members of German blackened crust band Ancst sound like they’re bloodthirsty beasts on their new album “Moloch,” a face-splitting assault from the word go that feels like a slew of angry creatures coming to assault you. There is no time to breathe, nor room in which to take cover, as Ancst unleash their music unto a potentially unsuspecting audience. Much like the people in those videos. It’s your fault if you get flattened. You are hereby duly warned about the ferocity of this 10-track album, and so any bruises or lacerations you incur from this point are on you.

Ancst got their start a half decade ago, having since put out a slew of smaller releases and split efforts that built up their reputation and hellacious sound. “Moloch” is their first record that will be released on a widespread basis, with labels as varied as Halo of Flies, Vendetta, Yehonala Tapes, and D’Kolektif putting out the music in multiple forms and regions. As for the band itself, its mission is an anti-fascist, anti-sexist, anti-religious endeavor, and for good measure, their Facebook site also adds, “Death to NSBM.” I’m hard pressed to argue against any of that, and after having experienced their vitriolic music, I’m fine with getting out of the way and watching the carnage sure to unfold.

The title track unloads right away, with zero chance to get ready, as the band works into a fury, with melody snaking into the storm. Thunder erupts, black metal strains rain down, and various colors and shades flood to the surface. “Behold Thy Servants” is ultra-charged up, with the melodies riveting and the vocals unleashing harshness. The song rips open into a hardcore-style blast, with undeniable passion infused into the mix. “The Skies of Our Infancy” bursts immediately, with black metal underpinnings rearing their head, and the raucous piece progresses quite fluidly. Sounds cascade, with the vocals reaching an elevated state of cataclysm, and the drums destroy everything. “In Decline” roars dangerously, spilling rage into sheets of melody that make for a rush of sound. The track steamrolls everything, with the guitars swelling to sting and fade. “Strife” brings cold guitars and what sounds like a machine generating fear in the background. The track then begins thrashing madly, with riffs dizzying, jolts of speed mashing, and a metallic-rich assault that’s absolutely destructive.

“Devouring Glass” sounds the way you’d think from its title, with melodic thunder ripping out of the sky and an awesome chorus that devastates. The vocals are smeared with fire, with the band chugging hard behind them before coming to an abrupt end. “Turning Point” has charring riffs and vocals that are more from the death metal terrain. Eventually it cools off and sends breezes, but then it erupts and stampedes toward the gates. “Human Hive” opens with a quote from Kevin Bales, co-founder of Free the Slaves, who gives a sobering speech relating modern working conditions to slavery. The song hits a melodic high, mixing brutality with catchiness with a scathing message, and the track finishes up a smoking pit of anger. “No More Words” follows the trend of heavy storminess, a sonic burial complete with meaty riffs, vocals crushing, the drums being massacred, and what feels like 1,000 pounds of sound weighing down on you. The record ends with “Lys” and its abrasive guitars, chunky riffs, and vocals lacerating any sense of calm. The music lathers with blood and goes in for its final kill, smashing you with a final does of tumult to send you on your way.

Ancst’s wider introduction to the world comes at a great time, when emotions in the world are high and we need an outlet in which to unleash our energy. “Moloch” is that record, one that galvanizes the chaos within us all and pours it into an experience that’s outright volcanic but also has its heart in the right place. Any of their enemies would be served well to get out of their way, and if you’re behind this tidal force, why not blast forward with them into their titanic future?

For more on the band, go here: http://www.ancstcollective.com/