One of the great pleasures in life for me is sitting in a giant movie theater and seeing the opening scroll of a new Star Wars play in front of me, unfurling the new plotlines that will enthrall me for the next 2.5 movies. Even when the enthralling didn’t exactly happen (yeah, Eps I-III, natch), watching those yellow words scroll into space at least instilled hope.

I got to thinking about that when reading the plot synopsis of Vektor’s incredibly ambitious new record “Terminal Redux.” If I was lazy (or lazier, let’s say), I’d post that entire block of text here for you to drink in so you could imagine you own Star Wars scroll effect. You can in due time, and I know that’s how I felt about this tale about a lost astronaut near death after having been subject to isolation testing. He discovers a life-rejuvenating molecule within a stellar nebula and returns home to the Cygnus regime to regain his ground and wrest away power from those who damaged him by holding his new life-extending force in his hands to those who would serve him. It’s the stuff from which space operas are made, and “Terminal Redux” definitely is the metal version of that very thing. Seriously, sitting with the lyrics is like reading a novella. The PDF file is 20 pages long! I love it! This 10-cut, 73-minute record is heavy, adventurous, a little zany, and something unlikely to be matched from a conceptual standpoint any time soon. 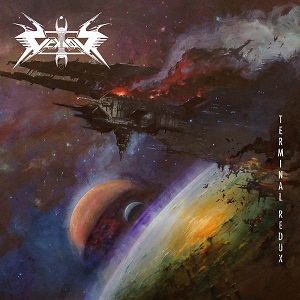 Vektor have been operating over a decade now, first going by the name Locrian and changing that over to their current moniker in 2004. In that time, we’ve only gotten two other full-lengths from the band, those being their 2009 debut “Black Future” and “Outer Isolation” in 2011. That means it’s been five years since we’ve heard from them, and Vektor—guitarist/vocalist David DiSanto, guitarist Erik Nelson, bassist Frank Chin, drummer Blake Anderson—certainly didn’t skimp on the material with this record. It’s a long, demanding album, but it’s an episodic one, with each track logically and sonically building along the way. By the time you wind down to the final two, you’re on the edge of your seat to hear how things end. Along the way, the band mixes traditional thrash, death, and prog seamlessly, as well as more than a few flashy moments where they let their creativity burst.

Our story begins on “Charging the Void,” with the song bursting into hyper drive and the creaky growls telling our tale, lamenting the fate, “A rider on the crest, carry forth or plummet to death.” As the song moves, we get some weird progressions from the band, lead guitars that twist and contort time, and later some breezier melodies and strange group vocals. All of that bleeds away and flows toward “Cygnus Terminal” that starts with guitars pushing through cold winds. That picks up and hits a thrashy pace, with coarse vocals spitting toward its protagonist, “You must have lost your mind/Why don’t we just kill you now and put this all to rest?” Delirious guitars rip out of that, zapping all over and leading toward a thunderous finish. “LCD (Liquid Crystal Disease)” has guitars bubbling and ripping open, with the band thrashing hard and the vocals pelting your flesh. There is a speedy, gruff chorus, delirious fun mixed into the track, and closing minutes that feel inspired by Megadeth’s “Rust in Peace” era. “Mountains Above the Sun” is a clean, proggy instrumental that erupts toward the end and collides with “Ultimate Artificer,” where the drums come alive and pummel, and the band starts landing a multitude of punches. The vocals scrape, the soloing goes wild, and the band positively crushes.

“Pteropticon” explores the outer edges at first before the song comes alive. The track is jabbing and massive, trudging by blindingly fast at times. The growls crush, while the guitar work again heads toward proggy territory as the track reaches its final destination. “Psychotropia” sits in a mid-tempo range for a good portion, mashing you back and forth and doing damage in a calculated manner. The guitars go exploring, but then they’re ripped back to the surface, where they grind into the ground. The tempo mangles and bursts, while all the elements just go off, with the rubbery bass feeling particularly damaging. “Pillars of Sand” opens most aggressively, with melody worked into the carnage, and the lead guitars feeling fluid and nasty as the same time. After a brief diversion down a wormhole, the song returns to its front end makeup to wrap things up. We start to see the end of the story coming into focus on 9:22 “Collapse,” a very different type of song with serene melodies and DiSanto going for clean singing, at which he’s quite adept. “Collapse into a great resolve, everything falls,” is a sober admission, as the song heads toward jazzy shimmering and, eventually, an explosion. Shrieks are stretched over the singing, while the guitars get heavier and make their presence felt, and the song ends on a somber note. Closer “Recharging the Void” runs a hefty 13:36, and each moment is vital. The thing begins going off the rails, with the band destroying everything in its wake and DiSanto noting, “We’ve lived beyond our years, and now we hear our calling.” As the song goes on, soulful vocal harmonies are worked into the mix, with the song feeling even more theatrical and the climax right over the next dune. The vocals lash out, group singing heads toward the void, and the band drums up a huge fiery ending apropos of the amazing story that has just spread out before us.

It’s still a few years until the next Star Wars installment, and I’ve given up hope anyone will do anything worthwhile with Dune, so “Terminal Redux” will do just fine filling in the void. This is the record Vektor seems to have been building to all along, and they knock this one way out of the galaxy. This is a challenging, flat-out fun record, and every journey into the cosmos with this is bound to be explosive.

For more on the band, go here: https://www.facebook.com/VektorOfficial

For more on the label, go here: http://www.earache.com/