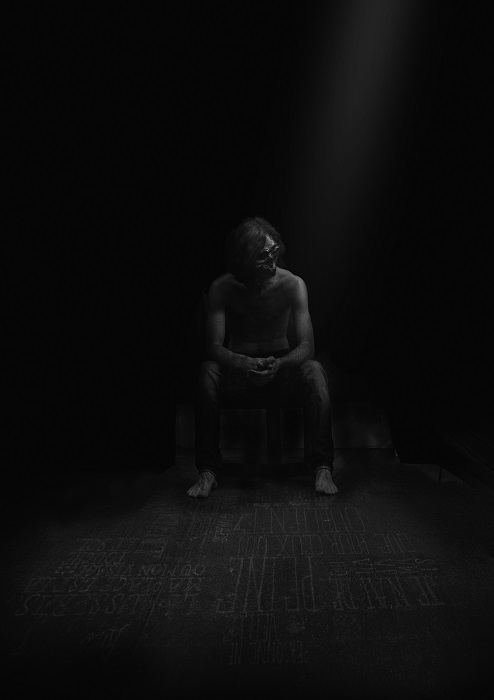 Pain and darkness seem to be major elements of what a lot of artists we feature here face. It’s part of the territory, considering much of this music is ensconced in ugliness and terror, so those who make genuine contributions to this art form feel that a little heavier than most.

For someone such as Dehn Sora, he’s been able to spread his morbid work over two forms of the metal medium. As a graphic artist, his creations have adorned collections from artists as rich as Ulver, Blut Aus Nord, and Church of Ra, and he also has added his musical chops to bands including Treha Sektori, Sembler Deah, and Ovtrenoir. But now the French artist is taking matters into his own hands musically with his new project Throane, whose debut record “Derrière Nous La Lumière” is being released by the always eclectic, typically foreboding Debemur Morti. As references, there is pain, darkness, and torment spread over these seven songs, and the delivery is foggy and menacing, leading you into mysterious corners and strange patches of murk.

While black metal at its core, there is plenty of experimentation, industrial smoke, and dissonant fire, and it’ll be pretty easy to make comparisons to bands such as Blut Aus Nord and Deathspell Omega. In fact, sometimes the music sounds a little too close to those forces, whether that’s on purpose or purely by accident, that it can blend into the bulk of what’s already out there when it comes to this sound. Yet, there’s certainly something intriguing going on beneath the surface, special qualities that give Sora a voice that extends beyond those bands and carves tributaries solely his own. It’s a pretty cool adventure, this album, and each listen tends to peel back layers unexposed on previous trips.

“Sortez Vos Lames, Que Nous Perdions Nos Poings” kicks off the record with noise wafting, unsettling guitars, and then the tempo catching fire and charging, only to have it cool off moments later. Wild howls then tear into the room, folding into chaotic noise that spreads out and fades away. “Aussi Féroces Que Nous Repentons” has chilling guitar and whispered passages lurking beneath the din, and then the music begins to float, with the vocals sounding like they’re cutting through your head. Listen to this on headphones to get the full effect. It’s pretty damn unsettling. Feral grunts precede the song entering an eerie silence that has guitars spitting out of the other end, and a damaged melody meets up with a renewed sense of chaos. The title cut is swirling and dizzying, with the fury building and the music stinging. Dissonant strangeness slips in, with the music disorienting, and the back end of the song spreads noise over the last minutes, like a droning airplane engine hanging overhead.

“Un Instant Dans Une Torche” has noise grinding and furious cries, with the sounds clashing as if going to electronic war, and the song stretching and reverberating. Suddenly, the track slips into sludgy madness, with your head spinning crazily, and the final moments driving into a mud pit. “Contre Terre” is a strange one, a track built mostly on ambiance that sounds ghostly and cold. It seems like an ominous fog is settling over everything, before guitars launch and stab wildly into the dark. “Nous Blâmons La Tempête De Nous Avoir Laissés En Plaies” lets the guitars churn and give off rubber fire smoke, while the tempo pounds and melts away. The sounds bounce all over and have a threatening vibe, and that pays off later when guitars re-emerge, maim dangerously, and then disappear into a sonic sizzle. Closer “A Cette Chute” starts with noises ringing like a bell, almost as if it’s trying to hypnotize. Suddenly, throaty growls gouge away, while the music feels like a ghoul circulating around your head, and the track dissolves into a thick halo of sounds.

Sora has something interesting here with Throane, and as time goes on and his music develops, it would be nice to hear him strengthen his own qualities. The ferocity and abysmal terror is present on “Derrière Nous La Lumière,” and it’s thick and massive, like a dark force lurking in the corner of the room that you cannot see but you know is threatening. This nightmarish collection is just step one for Throane, so who knows what horrible chambers we’ll enter on future journeys?

For more on the band, go here: https://www.facebook.com/throane