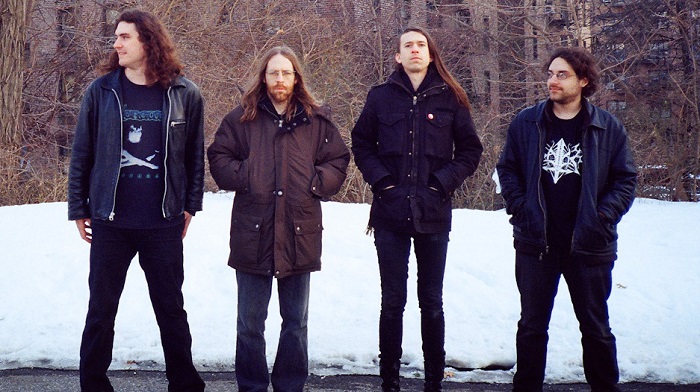 Just a few ticks after midnight, right after Mariah Carey won the heart of America, it felt like it finally was time to take a deep breath. We made it. 2016, the year of abominations, was over. Personally, the year wasn’t awful, but as the death count marched up (really, Father Mulcahy just under the deadline, you assholes?!) and we got ready for further political nightmares, it just seemed clearing the gates of last year was what everyone needed.

Yet here we are, pulled back to the black year for two noteworthy releases we didn’t get a chance to address in December. Once we’re in top 40 mode, it’s nearly impossible to sneak in anything else, so we didn’t get to talk about two really massive records, one from Krallice and the other from Teitanblood. Both are massive and smothering in their own ways, but they also serve different masters. So here we go, one last sip of 2016 before we expunge it from our systems.

Krallice have become masters of carefully secretive releases, as their last two were ones that suddenly were in our laps. That’s what a strong following, amazing music, and practical label freedom affords in this day, and their sixth full-length “Prelapsarian” landed right at 5:44 a.m. on Dec. 21, the winter solstice. So, dorks like me probably woke up for work, downloaded that bastard from the group’s Bandcamp, and had their minds blows on the way to work by their intricate, jigsaw puzzle-style black metal. It’s definitely right in the wheelhouse for anyone who hungers for the band’s—bassist/vocalist Nicholas McMaster, guitarist/vocalist Mick Barr, guitarist Colin Marston, drummer Lev Weinstein—insane style that veers just slightly out of control but is sci-fi-formula precise. No one is like them.

The album opens with the 12:30 “Transformation Chronicles” that starts in a noise haze and lets spiraling melodies work their way into your mind. Then the guys start grinding flesh, with wild howls launched and the cry of, “Disrespecting the point of life while the arrogance of worry spreads sores of stress and bone,” delivers a sobering message. The guitar work interplays and tangles with one another, forming a strong cord, while the back end of the song exacts more violence and pushes the vitriol into “Hate Power,” the shortest cut at 3:52 but also the bloodiest. The song is one of Krallice’s most aggressive to date, with blistering vocals, a break-neck pace, and utter demolition. “Conflagration” is rubbery and sinewy, with howled cries and gruff growls doing damage, as well as cosmically ripping playing that tears a hole in your brain. The final minutes have a different feel, letting things boil and create a dense fog, ending with trudging and noise squall. The record ends with 10:41 “Lotus Throne,” where noise sizzles, proggy playing does tricks, and deathly growls meet desperate howls. Later, the tempo calms a bit, but that’s more of a segue to the end, where guitars chew bone, insane wails bruise the skin, and the whole thing winds up in a tornadic tear.

Krallice remain the absolute masters of what they do, and no matter how many bands try to copy their DNA, there’s only one original. “Prelapsarian” is another massive building block as the band constructs its obelisk toward the sky, and we all can wait in the darkness of mystery as to when the next chapter arrives. By the way, you can get this digitally in an instant, but Gilead Media also is putting out a version on vinyl that you can preorder now.

For more on the band, go here: https://www.facebook.com/krallice 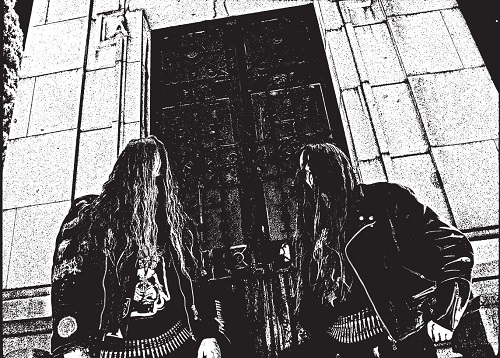 Spanish death/black metal duo Teitanblood never let us down when it comes to infernally rotting fury that makes it feel like you’re stuck in an underground tube, tunneling your way toward hell. Over the past nearly 14 years, they’ve made music that makes other death and black metal bands cower, as their music always burns the hairs off your arms and, if you get too close, the flesh off your face. We last heard from them in 2014 with their pummeling full-length “Death,” and now they have a two-track, 26:14 treat in “Accursed Skin” that is being served up on 12” vinyl. The band—guitarist/bassist/vocalist NSK, drummer J—knows no other way to do things than the most extreme way possible, and as time goes on and the band digs in their heels, their music gets bloodier and more unforgiving.

We start off with the 14:28-long title cut, where you feel like you’re in a dank, soaked basement, with water up to your ankles and rising and you having no idea if any other creatures, especially dangerous or poisonous ones, are lurking. Slow-driving grimness takes over, beating you about the head and torso, and it starts to feel like you’re being pushed face first into that grossness beneath your feet. The leads blister and spit fire, and the vocals are utterly oppressive, making it sound like a lashing designed just for you. The stomping keeps going and never relents, as black chaos sweeps in and blinds you, a cacophony of noise pushes you to your limit, and bubbling blood and corrosive sounds bring the track to a merciful end. “Sanctified Dysecdysis” is a hammering assault, ripping everything open with speed and strength. There is an ugly stretch of putrid death that is overwhelming, and that nastiness gives way to a bed of strange noise and filth that spreads its way to the next attack. There, destruction reigns and the pace marches through the mud on its way to the blast furnace that takes over the final moments, leaving you a heaving mess drowning in a pool of diseased noise.

Ugly and foul, Teitanblood remain terrifying and unforgiving in their approach, and “Accursed Skin” is another damaging reminder of just how fucked up they can make their music. This is death and black metal that leaves scars and can frighten even the toughest of souls. Don’t expect a smooth trip into damnation, because Teitanblood are going to drag you there through thorns and cinders.

For more on the label, go here: http://www.noevdia.com/