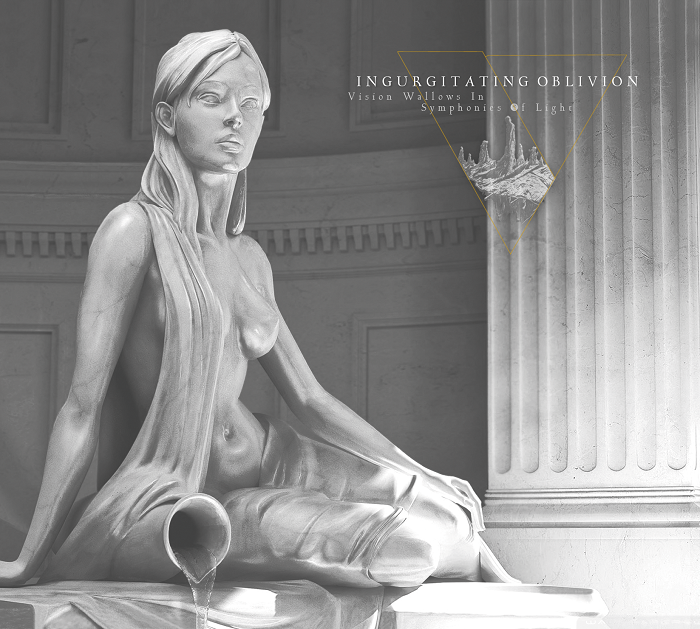 I’ve been kind of bored with the majority of death metal for a long time, because so much of it feels like what I’ve already heard a million times before. Bands that don’t do the same thing over and over again are becoming the exception, not the rule, so when they come along, it’s a strange breath of dank air.

German crushers Ingurgitating Oblivion have loftier goals than most bands. Their music is not easy to digest, and while it certainly is progressive in nature, it keeps your brain going and processing. But most of all, their music is a sonic adventure, and you remain engaged with what’s going on almost by force. “Vision Wallows In Symphonies Of Light,” the band’s third record, is a force with which to be reckoned but also a collection that could have you wondering what you just witnessed. This is a true front-to-back document, a record you can’t sample or jump in and out of and absorb the music with any real sense. This is something you have to tackle from the start and see through. It’s an epic, and it’s tangled and pissed, so you’re bound to run through the gamut of emotion. The band—longtime backbone and guitarist/vocalist (starting with this record) Florian Engelke, bassist/synth player/vocalist Adrian Bojarowski, drummer Paul Wielan (though Lille Gruber of Defeated Sanity played on the record)—spread out before their listeners an adventure in technical and progressive death that keeps your brain tied in and punishes the senses.

Every track on this thing is a mouthful to say and takes 45 minutes to write, yet here we go. “Amid the Offal, Abide With Me” is the 10:42 opener that emerges along with a noise cloud. Once it tears apart, the band hits a death-rich groove that obliterates the senses, and even when short waves of calm arrive, we get pulled back into the choppy deep end. Gruff, harsh growls mix in with the volcanic tempo, while the guitars charge heavily and maintain that assault as the track goes on. Soloing soars and brings a new sense of adventure, while the final bursts scrape before tranquility arrives and swallows the thing whole. “A Mote Constitutes to Me What Is Not All, and Eternally All, Is Nothing” is a 22:49-long journey into space. The first few minutes set the stage and mood, allowing numbness to wash over your brain and encourage detachment from the physical world. About 6 minutes in, the torment arrives, and your guts turn. Harsh growls and twisting, turning playing not only bring a sense of audio terror but also keep your eyes pasted to the plot. The guitars swim and roar, as the playing lulls you into brief stretches of serenity, only to be met by a bloodthirsty beast on the other side. Weird, chilling guitars bring a freezing ambiance, as the song dissolves into odd speaking and an engulfing sound haze.

“Vision Wallows in Symphonies of Light” charges open and shows impressive prog-infested fire. The tempo is punchy and chaotic for the most part, with growls hulking and dragging behind it a path of blood and guts. A mystical section blows in and cools off the atmosphere, but that’s a temporary thing as the track bursts at the seams all over again. The band stomps and destroys harder than ever before, feeling like they’re about to take a city full of buildings down with them. Pianos then trickle like a mix of blood and rain, and that eventually overtakes the song and takes it to an elegant end. Closer “A Devourer of Fitting Shades Who Dwells in Rays of Light” is the shortest cut at 7:39, and its first half is like a fever dream as soundscapes spread and cause blurry eyes. Xylophones, warbled speaking, and strange guitars create a vortex of sound that is like walking through the fringes of a nightmare. At about the 5:30 mark, the beast rears its ugly head, and everything is dragged into hell. Throat-slaughtering growls, crushing playing, and an inferno of power whip into full strength before finally fading and disappearing into the universe.

Ingurgitating Oblivion’s rubbery, senses-obliterating death metal is in full force on “Vision Wallows In Symphonies Of Light,” their most ambitious record to date. They don’t tread death metal’s path with any sense of falling in line or desire to fit in with the pack. This band pushes all limits well past the boundaries, and their work should keep you guessing and panicking the whole way through this vicious record.

For more on the band, go here: https://www.facebook.com/IngurgitatingOblivionOfficial

For more on the label, go here: http://www.willowtip.com/home.aspx