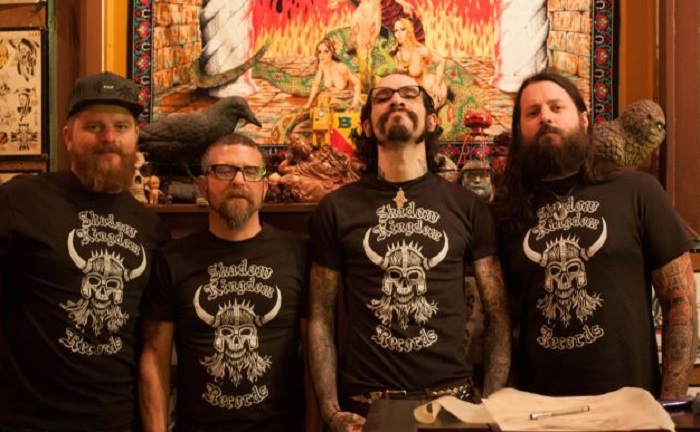 This is going to sound like me complaining and going on like a broken record, but one drawback to doing a site such as this one is you often get lost in a haze of like-sounding music. Despite that, I still find a lot of new stuff to enjoy every year. But it’s becoming far less common to hear a band and walk away feeling like they’re onto something a little different.

Houston’s Venomous Maximus have been around for a little while now, and they’re always one that leaves an indelible impression with each record. That carries over to their new third release “No Warning,” an album that centers on strong songwriting, music that has an unmistakable personality, and the element of fun. You remember that, right? I know it’s not exactly cult AF to admit getting into and actually enjoying yourself with a record, but I’ve done that every damn time I’ve visited with these 10 tracks. Out front is vocalist/guitarist Gregg Higgins, whose singing sticks with you far after the record has finished and has a voice that immediately will strike you as one unique within metal’s confines. It’s a blast to hear him sing and sell the hell out of these songs. With him are essential parts including guitarist Christian Larson (formerly of Eternal Champion), bassist Trevi Biles, and drummer Bongo, and combined, they spread a charming B-movie sense of horror over these doom metal-laced pounders. But it’s not just metal here. You can hear punk and goth influences as well, which adds even more color. That’s especially the case with Higgins’ singing. 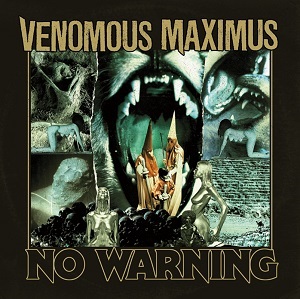 The record starts with “I,” a quick instrumental introduction full of quivering keys and cosmic zaps, and then it’s on to “Spellbound,” which drives right into goth-smeared punishment. “I shall run, run, run away,” Higgins wails as the riffs chew a nice bit of the scenery. The melodies grab you hostage, and Higgins ends by adding, “They always said I was lost.” “Pray for Me” has a rainy haze at the front, as murky keys join the fray, and Higgins wonders, “Where are the saints and where are the saviors?” Guitars travel fluidly though the mire, as the track comes to a punchy end. “Return of the Witch” is a definite highlight, as the guitars drive up a storm, the chorus dominates, and Higgins’ singing brings back memories of early-era Iron Maiden. “You said I was yours until you die!” he calls out, as the track gets thrashier, and everything disappears into the darkness. “All of My Dreams” starts in a bath of acoustics before creaking speak-singing enters and carries the track. The drama hits a first-half crescendo, as the music bubbles up, and Higgins howls, “Only true love can break your spell!”

“II” kicks off the second half with a synth fog rolling, giving off a heavy ’80s vibe, and then it’s onto the title track, where heavy riffs split faces, much like classic Priest, and a true sense of vintage metal haunts the halls. Gang “hey! hey!” shouts get the tempo and blood pumping, while the music adds its own fireworks, and Higgins belts, “Time keeps ticking every day.” “Blood for Blood” also chews on metal’s roots, as vampiric visions sink their teeth into the cut, and heavy echo on the voice makes the song feel even stranger. The guitars lather up the scene, creating lightning that blinds you in your steps, while massive chugging and wild calls into the night bring the song to its end. “Endless” is a quick instrumental built with acoustic guitars, thunderclaps, and a soaking rain, then it’s on to closer “Sea of Sleep.” The track wastes no time unleashing its energy, though it also sinks into doomy territory for a bit, trudging toward Black Sabbath territory. Molten soloing turns the earth to liquid, some heavy punches are landed, and the track heads off into the cosmos … until is mysteriously returns a few minutes later to deliver a couple more crunchy riffs.

Venomous Maximus continue churning out really strong material, and “No Warning” is their finest hour (well, 42 minutes) to date. This band is ripe for breaking out to a larger audience, and if this record gains traction, they could follow in Ghost’s footsteps and swell their audience. Every moment of “No Warning” is rock solid, and if you’re still cool with putting on a metal record and having fun, look no further than this swaggering beast.

For more on the band, go here: https://www.facebook.com/VenomousMaximus/

For more on the label, go here: http://www.shadowkingdomrecords.com/