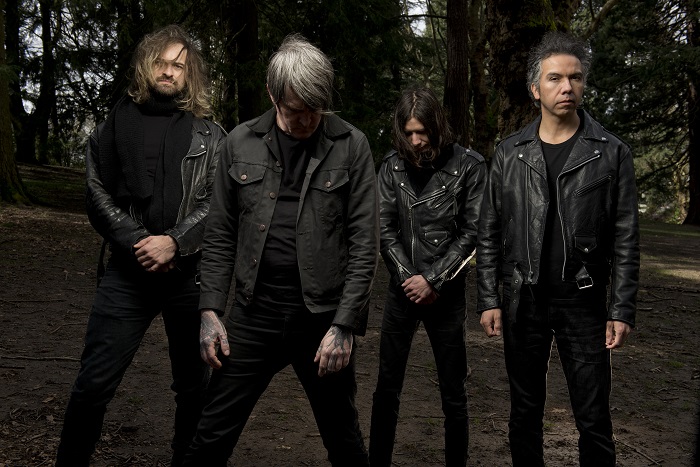 Being able to turn torment and psychological pain into music that drips black with those awful things if a gift, albeit a terrifying one. Many artists over the years have traveled dark paths and led listeners into harrowing corners where sadness and torture lurk. Few have been able to make music that literally sounds like it’s constructed of those things.

Atriarch lurked out of the shadows years ago from their home base in Portland, Ore., and their deathrock-infused doom always has felt overwhelming and sinister. The band’s new, fourth record “Dead as Truth” is near, and it’s another punishing display that could carve away at your body and mind. Everything they create feels like it has been lurking in the bleakest caverns of their mind, letting you taste the depression, anger, and frustration welling inside. It doesn’t take long into their new album to express that, especially when the acidic words drop from vocalist Lenny Smith’s mouth, tearing their way into your heart. His singing is one of the most effective elements this band has, as it’s impossible to avoid or deflect. But let’s not discount the rest of the group—guitarist Joshua Dark, bassist Andy Savage, and drummer Maxamillion—who help create those thick curtains of sorrow that drape you skin and bone and leave you shivering in tears.

“Inferno” starts the record and immediately thrusts you into the madness. Synth slowly unfurls, as Smith’s singing starts cutting into the skin, as he pokes, “Regret what you cannot change,” an instant tributary into guilt complex, before leveling with, “This is hell, we’re in hell!” Depression is thick and impossible to shake, while the fear of death stomps, hammered home with Smith’s ungodly shrieks and the band’s pummeling power. “Dead” is dripping with deathrock-style bass and guitars charging, as Smith manages to find a way to make things ever sootier. “All is lost!” he yelps at one points, taking you into his downward spiral, but it’s the gunshot blasting chorus of, “Su-i-cide!” where the despair gets to be too much. The final moments dissolve into rage, with Smith wailing, “Dead and gone and dead and gone!” “Devolver” has grimy growls and guitar sludge, as the vocals dig into your veins, and the pain is spread thick right up to the end.

“Void” runs 7:15 and rides in on the wings of charnel keys. The bass rolls while the singing warbles underneath it all, rising to the surface long enough for Smith to demand, “Stop saying words!” From there are shrieks, anguish, and self-loathing, as the vocals pierce the ear drums, the guitars rise and slay, and the track bleeds away. “Repent” has a strong doom charge right out of the gates, letting things lightly boil before rage pours over on the chorus. The song digs into class warfare and the plight of those who must struggle every day, as Smith ups the ante, screaming, “Annihilation, time to die!” as the song comes to a bruising end. Closer “Hopeless” has a clean run for a while, as emotion cascades, and Smith slurs and stalks from behind. The cut crumbles with Smith’s psyche, as he wails, “There is no love, there is no life!” The track’s tempo leans toward carnage, as the fires are stoked, giving off heat. Later, it’s back to ink-filled seas, misery-soaked singing, and the song disappearing into a static void.

Atriarch’s music isn’t for sunny days or for summer fun or for friendly gatherings. “Dead as Truth,” like all their records, is for deep reflection, personal bloodletting, and confronting any lingering psychological demons. This music isn’t here for anything else but taking part in the band’s suffering and figuring out how that overlaps to your own scarred existence.

For more on the band, go here: https://www.facebook.com/AtriarchOfficial