We cover pure metal, in all its forms, just about every day on this site. So, the opportunities we get to branch a little beyond that (and we’re going to do it a couple times this week) always are worthwhile. There’s a nice bit of music out there that, while not necessarily 100 percent metal in formula can appeal to this audience as well as many others.

I was intrigued with Philly-based Ruby the Hatchet pretty much from the first time I was introduced to them. Their doomy rock and psychedelic fire definitely fit in with what we do here, but it can reach out and pull in plenty of other types of music fans. That was proved when the band had road stints with artists as varied as Uncle Acid and the Deadbeats and Black Mountain, two bands that stand apart sonically but also have a lot in common. Just like Ruby and the Hatchet. The band ups its game significantly on their new record “Planetary Space Child,” the follow-up to 2015’s rock-solid “Valley of the Snake” and an album that finds them soaring musically and mentally into the cosmos. You can turn on this record late at night—strong libations encouraged but not necessary—and take an amazing journey in your mind along with the music. The band—vocalist Jillian Taylor, guitarist Johnny Scarps, bassist Lake Muir, organist Sean Hur, and drummer Owen Stewart—sounds stronger than ever on this collection, and what they achieve in their powerful live shows, they transfer to this album. 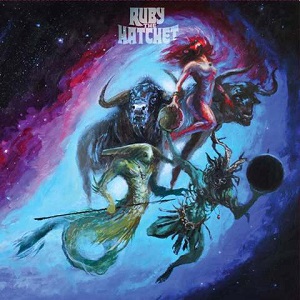 The title track gets the record going, as weird cosmic sounds bleed in, and the first three minutes are dedicated to building the mood. Taylor finally begins her part of the tale, pointing, “Your mind has a weakness,” as she really begins to take off. The track soars, the music turns into a psyche jam out, and the whole thing comes to a stomping end. “Killer” adds menace, as the riffs and devious organ form to make something that would make Deep Purple proud. “Voices tell me where to go,” Taylor wails, finally admitting, “I’m a killer,” amid eeriness and crunch. “Pagan Ritual” starts with mesmerizing playing that topples the mind, while the song finally kick starts and gets the juices flowing. The band changes pace on you a few times, keeping things interesting, while the guitars are trippy and fiery over an extended section of playing. Out of that, the music keeps bubbling and eventually flows over the rim.

“The Feel” is the oddball of the bunch, as haunting organs and steamy guitars join up, and once Taylor unloads, the whole thing takes on a Fleetwood Mac vibe. The guitars cut through, as the band goes on another jam session, and the final moments add fuel to the blinding fire. “Symphony of the Night” is the longest track at 7:09, and it has a clean, almost gentle start. Powerful singing is layered over top, as the organ infects, and the band heads toward a doomy, mind-altering sound cave. The guitars begin to gain steam, as a massive solo rips out of that, and Taylor’s powerful pipes add extra bits of power as the song reaches its finish. “Gemini” feels like a road burner, one you’d blast in the midday sun while heading off to nowhere down a desolate highway. The organs drive, as psychedelic smoke rises, and Taylor adds the exclamation point, wailing, “They’re telling me it’s time to die!” Closer “Lightning Comes Again” is a seven-minute ballad that pours steam and intensity. The track emerges from the fog, as the song builds its intensity slowly until its eventual bursting point. “You’re living with the dead,” Taylor prods, as guitars well up and apply pressure, the vocals continue to swelter, and the entire band brings the song to a fire-breathing crescendo.

Ruby the Hatchet slowly have been making their name and turning heads, and “Planetary Space Child” should cause a ton of neck jerks in their direction. This is a thunderous, psyche-drenched adventure from front to back, and each song stands on its own but also adds to solidifying the record as a whole. Everything about this music works on every level, and it’s the finest achievement in this band’s young career.

For more on the band, go here: https://www.facebook.com/rubythehatchet

For more on the label, go here: https://teepeerecords.com/