The presence of great adventures is something that has made heavy metal a great form of music for decades. Consider bands such as Iron Maiden, Helloween, Mercyful Fate, Bathory, and those who like to weave tales and revisit history, and you have some of the genre’s best storytellers ever. Metal doesn’t have quite as many of these bands at the forefront now, but they’re out there.

One such band is Sons of Crom, the Finnish duo that’s near the beginning of its run but that already has created some compelling, adventure-soaked metal. They’re back with their excellent second record “The Black Tower,” their first for the two-headed beasts of Bindrune Recordings and Nordvis Produktion, where they could not possibly be more at home. Vocalist/multi-instrumentalist Janne Posti and drummer/vocalist Iiro Sarkki follow up their tremendous debut effort “Riddle of Steel” with an eight-track record that’s compelling and gripping right from the start. The band pushes past the narrative of “Steel” to this tale, where our protagonist is on a quest to find truth beyond the mortal realm, a place of no time, space, life, or death. It’s a mysterious, enthralling journey, and every moment drips with metallic wonder splashed with bits of classic, black, death, and folk styles of metal. 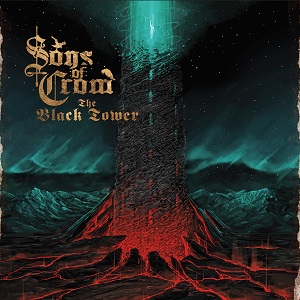 “Steps of Doom” starts the record in ominous fashion, as the music sounds like it’s the opening theme for a film about great, time-altering battles and history-honored warriors fighting for everything they hold dear. Thick synth and stirring strings pulsate, as deep, Viking-style singing blend into “In Fire Reborn,” a rousing song that has a glorious pace and a fantastic flow. We start with Enslaved-style verses, with shrieked vocals and jarring melodies, and then it’s on to the soaring chorus. They follow that path, later delivering one of the most rousing sections of singing on the entire record, a passage that will make your blood surge. Folk-style strings arrive and add texture, and a calm path with echoing chants conjure spirits. Later, guitars intermingle and create blinding lights, and the track ends on a gigantic, mountain-toppling note. “Fall of Pandemonium” mixes strings and classic-style guitar riffs, feeling like the ghost of every era of metal combining. Strong singing drives the pace, while fiery soloing, storming melodies, and a death-defying tempo bring the song to an end. “Legacy” calms things a bit, as acoustic guitars march in, and lush strings sweep over everything. Rousing folkish singing emerges, making the heart race, and the urging of, “Dark mother, let your banners fly,” feels both liberating and galvanizing.

“Black Wings Up High” has vocals bellowing and the band pounding through, with a heavy prog edge to the whole thing. The chorus is one that’ll etch itself in your brain and play over and over after you’ve finished listening, while a voice speaks asking its followers to spread wisdom before the track comes to a gushing finish. “Summoning the Starborn” has majestic synth blowing in at the start, before the song gets punchy and direct. “Time, we meet again,” is called over a base built with a tempered pace, deep crooning, and some tremendous soloing that should fan classic fires. Later, keys glaze again before the track is gutted, grim growls lay waste, and the song ends in the eye of a storm. “Viimeinen Laki” has a melodic burst before the singing goes cold, only to be met with terrifying howls. Those grim growls echo in the wind, while quiet acoustics later mix into the pattern before the song is engulfed in flames again. The leads cut through, while the soloing burns, leaving a tall plume of smoke in the dark night, and then its essence is sucked into space for good. Closer “Rebirth of the Sun” is a rustic instrumental, a calming curtain dropper on our tale complete with swollen strings, heartfelt melodies, and a thunderstorm arriving and soaking the ground.

Sons of Crom have a firm grasp of what made metal such a fun escape in the first place, and “The Black Tower” is another chapter into the band’s sojourn. With two great records under their belt and a solid footing in storytelling and fantastical image conjuration, these guys can help be that thing that carries you away from what ails you and transports you elsewhere. This band is both heavy and creative, and their commitment to soaring epics should carve them a permanent place in metal lore.

For more on the band, go here: https://sonsofcrom.com/

For more on the label, go here: https://shop.bindrunerecordings.com/