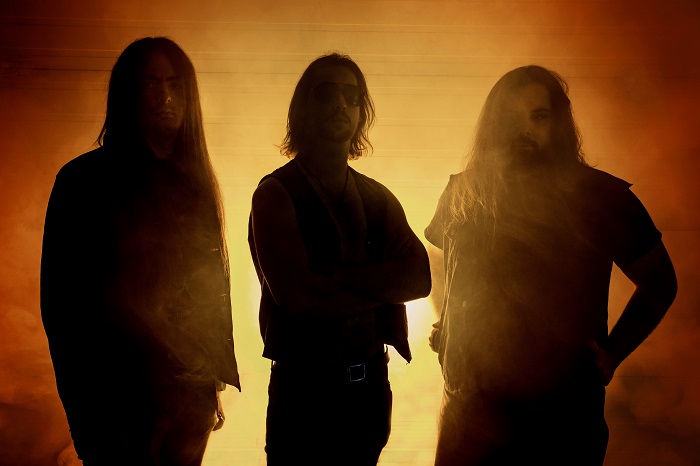 Metal is the music of great beasts, and I don’t think there is anyone who could deny that. We have Behemoths and Mastodons making music, the devil’s shit is all over this stuff, and any type of overgrown, disgusting giant is easy fodder for fantasy-style lyrics or for colorful album artwork that, if displayed in a store, should stand out.

But what about music that sounds like it was made by beasts? Edmonton death/thrash unit Phylactery has that element covered on their devastating debut record “Necromancy Enthroned.” If I was told that this music was made by four creatures with hooved feet and horns protruding from their skulls, I wouldn’t exactly bat an eye. These 11 songs are punishing and deadly, easily stuff that could be deemed beyond the reach of mortal men and into the world of monsters. Alas, it’s but three guys—vocalist/drummer K.T., guitarist T.G., and bassist J.M.—making this hellacious noise, and their riff-heavy, nasty approach makes these things sometimes feel like it’s all flowing into one bloody stew. It’s easy to lose track over this nearly 35-minute punishment session, as your skull is bounced from wall to floor, like you’re being attacked by Skeletor during one of his more potent assaults. Not that it’s a bad thing.

“Risen Restless Dead” kicks off the madness with charging riffs and menacing growls, as K.T. demands his minions to, “Rise!” Clean playing streams in momentarily before everything fires up again suddenly and then heads toward “Wisdom of Heretics,” where strong guitars and thrash violence meet you and head right for the throat. The vocals sound delivered by a manic goblin out for blood, as the words are spat with venom, as K.T. demands you, “Die!” “Fulminations” has a satisfying, almost nostalgic old school thrash bend to it, as the song speeds ahead, and K.T. howls, “We will devour your name!” The basslines give black eyes, as the track comes to a furious end. “Morbid Existence” pulls no punches, as it’s a fast blast complete with raspy growls and chugging riffs. The assault remains mean and channeled throughout, as K.T. wails, “Die and die again!” to hammer home their ill intent. “King of Ruin” is another blistering attack, where nasty growls rip at the flesh, and guitars stab every vulnerable spot.

“Where I Dwell” has drums rumbling through the gates, guitars chewing muscle, and growls lurking mysteriously under the surface. “Enslaved by the Dawn” is calculated and vicious, as the bass rollicks underneath the din, the growls threaten lives, and a sudden shift change toward the end sends the song into a mad gallop. “Eyes of Fear and Flame” has drums rolling in and clobbering bodies, while the riffs send blinding lightning, and K.T.’s growls sound delivered from a throat lacerated by war cries. Every bit of this is fast and aiming to take your breath from your lungs. “Bubonic Undeath” fades in from the darkness before exploding outright. From there, it’s a death march, as the growls sound like they’re gurgling through blood, and some classic metal flourishes are tacked on for good measure. “Unholy Empire” rips apart, as it’s fast and gnarly, with the vocals unleashing grit. Their thrashing is well meted out, reddening the skin, and some evil-sounding chuckles and a bashing finish add pain and take you into closing cut “Eat of My Disease.” As you can deduce from the title, things are misery inducing and disgusting, as the vocals scrape along and the guitars trudge heavily. “Humankind is made in our image, born just to die!” K.T. growls as the song rounds it way to its mashing finish.

Phylactery’s music is made by monsters for people who want to be terrified of what’s coming out of their speakers. These guys give you exactly that on “Necromancy Enthroned,” an ugly, devastating platter of songs that fly by in an instant but still leave ample bruising. Nothing here is pretty. It’s all blood, puss, and broken bones, just the way thrash and death are meant to be.

For more on the band, go here: https://www.facebook.com/Phylacterydeaththrash/

For more on the label, go here: http://unspeakableaxerecords.com/