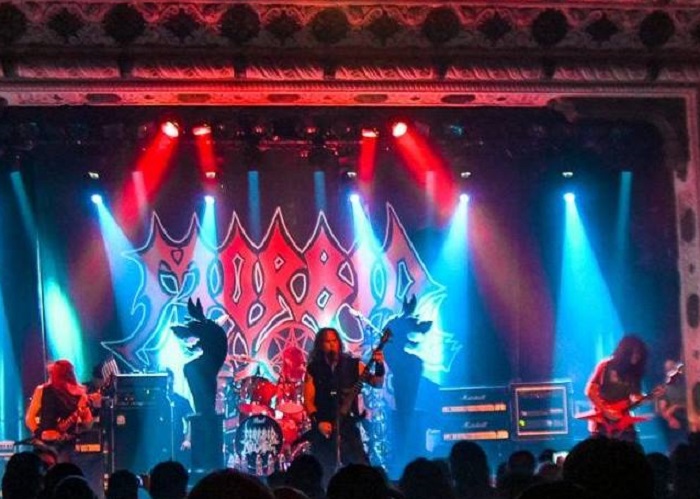 Everyone does dumb shit. One time at the beach, I drank so many Palo Santos that I shit my pants on the sidewalk right into a fresh new pair of boxer briefs that I had to throw away in the restroom of an Italian restaurant while a really band stand-up comedian was dying alive on stage. Basically, we all have moments of which we’re not proud.

We all know about Morbid Angel’s last record, the universally reviled “Illud Divinum Insanus.” It was their version of uncontrollable liquid stool demanding it splash its way onto your new boxer briefs you totally really liked and fit you so well. But Morbid Angel are absolute death metal royalty, legends walking among us, so we can forgive one really, really bad record. We can flush that thing because these guys gave us “Altars of Madness,” “Blessed Are the Sick,” “Covenant,” and even “Heretic,” an album that we’ll get back to in a bit. These are touchstones that cannot be touched and helped build the foundation for death metal as a whole. But here we are, five years after “that which shall not be named again,” and we have a reshuffled Morbid Angel lineup and a new record “Kingdoms Disdained.” Oh, we didn’t skip J in the A-Z album naming. The J went to live album “Juvenilia,” so everyone stop whining. On this new 11-track record, we have a mix of Morbid royalty as Steve Tucker is back on vocals and bass, replacing David Vincent. He ruled on aforementioned “Heretic,” and he does here as well. Guitar wizard Trey Azagthoth remains, as he should forever, and they’re joined by new recruits Dan Vadim Von (guitars) and Scott Fuller (drums) who more than hold their own on this record that will make fucking awesome. That’s actually all you need to know.

“Piles of Little Arms” gets the record started, and it’s arguably the strongest track on here. Trudging death, grisly growls, and a stabbing pace both infuses the track with violence and gets your juices going. “D.E.A.D.” has guitars swirling and vocals crushing, and the guitar lines even get a little zany in spots. “We’ve come to wipe this planet clean!” Tucker wails as the track rips out your guts. “Garden of Disdain” lets guitars roll out of control, as the track heads right into the mud and delivers crunchy punishment. The song scrapes and steamrolls, as Tucker wails of the Sumerian gods he invokes on this record who fear they’re “dismissed and long forgotten.” “The Righteous Voice” is bloody and wild, with the growls menacing and the melodies being mashes into the dirt, as the leads blare and cut to the bone. “Architect and Iconoclast” is grim and slow driving, putting the assault into a mean, meats-and-potatoes type of approach. “I am prophecy fulfilled!” Tucker wails, once again pulling on the gods of old.

“Paradigms Warped” begins a stretch of songs that revel in a little bit of same-ness, making the second half a little slower. They’re not bad songs, but they kind of blend together. On “Warped,” a thick bassline and clubbing playing accompany Tucker, who is demanding demons be released. “The Pillars Crumbling” is smothering and grisly, as the death growls grind bones, the leads burst in, and a brief coolness precedes lava-splashed guitars. “Fear No Master” is savage, nasty, and abrasive, causing brush burns to mar the flesh and the leads going off, adding lightning to a song that shares personality with the couple that came before it. “Declaring New Law” also falls into that same tar pit, as Tucker, in the voice of the old Sumerian souls, takes on doubt anyone holds for their presence. “Erase them!” he howls, as the soloing tears toward the end. “From the Hand of Kings” changes the pace for good, as the song is fast and sudden, heavy punishment is meted out, and even a psychological edge cuts through, adding a level of weirdness. “The Fall of Idols” caps off the record with a fast, menacing gallop, as the track cuts into bone, and the harsh growls amplify the violence. The guitar work boils over as the song winds down, and everything comes to a damaging, screeching end.

Morbid Angel are back on this devastating record “Kingdoms Disdained.” It’s not an all-time classic, but it’s definitely a solid entry into their unquestionable catalog that has ruled for decades and will forever. Yeah, they fucked up. Like you’re so perfect. But this album is not just righting the ship, it’s directing that thing back toward a bloody battle in which they can have some deciding power.

For more on the band, go here: https://www.facebook.com/officialmorbidangelpage

For more on the label, go here: http://sl-music.net/en/