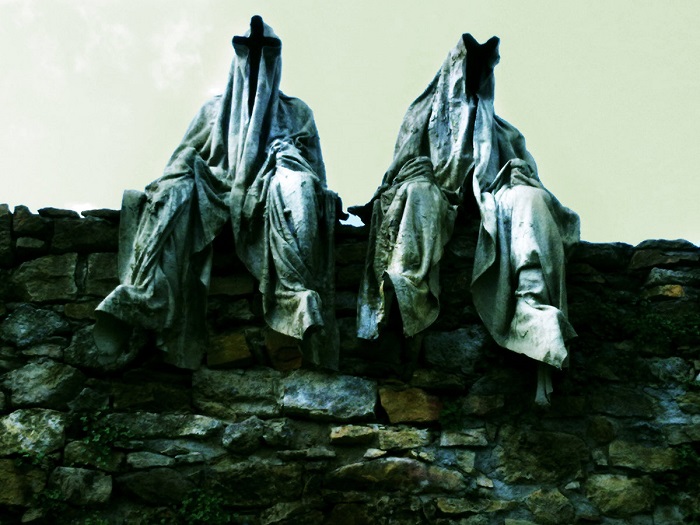 It’s unlikely that when J.R.R. Tolkien was writing his classic stories about Middle Earth that he knew his works would go on to influence a countless number of metal bands. Maybe he knew about Led Zeppelin’s allegiance before his death in 1973, but no way he realized the slew of metal artists who would adopt his stories for songs and band names.

One of the most ardent defenders of Middle Earth has been Austrian duo Summoning, who have devoted a quarter century of work to celebrating Tolkien’s creations. The band has returned after a five-year absence on “With Doom We Come,” an eight-track, 65-minute record that unfurls their dreamy, synth-driven black metal even deeper than ever before, piling glory and emotion into their strange transmissions. The band long has been the dream of Protector (vocals, guitars, synth, drum programming) and Silenius (vocals, keyboards, bass), who have been making their interesting blend of metal since 1993, releasing eight records along the way, including this new one. We haven’t heard from them since 2013’s landmark “Old Mornings Dawn,” though their long periods of silence between records isn’t exactly a new thing. Before “Dawn” they hadn’t released a full album since 2006’s “Oath Bound,” so it’s clear it takes some time for their music to marinate.

“Tar-Calion” begins the record unfurling the story of the final king of Numenor before the land was swallowed into the sea, as dramatic drumming drubs and stern dialog states, “Only his death or mine will end the cycle.” We know how that ended. Guitars cut in, synth fogs gather, and the track comes to an end that feels like the final battle in an old castle. “Silvertine” has drumming and percussion leading into guitars lighting up, maniacal growls, and horns blowing as if signaling doom. Gothy keys mix in, while the singing on the chorus is infectious, and the melodies spiral over and over again. “Carcharoth” is named after a great werewolf brought along by Morgoth, and it starts with guitars pushing and growly singing. Horns and whistles make the song feel like one inspired by an old pirate ship, while the singing pushes the narrative, ending the tale in sinewy violence. “Herumor” simmers in murky keys, as grim growls and dulcimer hammer out the melody, giving it a chambery feel. Horns sound out as angelic backing vocals rise. Keys trickles away, and a rousing chorus gets into your blood and refuses to leave.

“Barrow-downs” is one of the shorter cuts at 2:47, an instrumental containing plucked strings, marching horns, and chants, as it sounds like an infantry is marching through the low hills. “Night Fell Behind” tears open with sinister riffs and ragged singing, with the mood altered with a splash of keys. Loud knocks disrupt any calm, while sweeping vocals and grittier playing give the track a rougher finish. “Mirklands” is the second-longest song, an 11-minute epic where synth, emotion-rich melodies, and knocking beats surround the gruff declaration of, “Good-bye, proud world, I’m going home.” Psychedelic strings lather the song in strangeness, while the pace keeps punishing, the keys create a disorienting mist, and the track storms out into the darkness. The closing title cut is the lengthiest song at 11:18, and it comes in on a bed of classic strings, harsh singing, and lush flutes that amplify the sense of wonder. There is a stretch that feels like a 1970s-style folk song, and that pushes into spirited group singing envisioning the falls of The Elder King Manwe and his wife Varda, as the tempo stomps out the record’s remaining fires.

Summoning’s fantasy-driven, dream-state world gets another new chapter on “With Doom We Come,” an album that keeps the band’s traditions solid but also adds new curves. Their music never was a mass appeal thing, as their sound has more of a niche appeal, but to a loyal audience. But that hasn’t stopped them from amassing followers and releasing music that keeps your mind and heart racing to see where the drama takes you into the lore of Middle Earth.

For more on the band, go here: https://www.facebook.com/SummoningOfficial

For more on the label, go here: https://www.facebook.com/napalmrecords/