I’ve mentioned this before, but the era of the big metal record has kind of passed. You do get landmark underground releases each year people get excited about, but beyond whatever shitty record Mastodon releases next, there aren’t a lot of albums that get large amounts of people excited.

Luckily, we have one of those today in the form of “Down Below,” the new record from Swedish black metal band Tribulation that follows up 2015’s much-praised “The Children of the Night.” This is the first really big album of 2018, and to have it arrive so early in the year already gives us a hype benchmark few bands will be able to approach the following 11 months. I asked this same question with the release of “Children,” a record that really left me cold (and, apparently, I’m alone in this assessment), in that does “Down Below” meet the lofty expectations and accolades already being showered on this piece of work (Decibel gave it a perfect 10 score)? The answer this time is a resounding yes. I didn’t dislike “Children,” but I didn’t see what everyone else did. This time, these nine songs that stretch over nearly 47 minutes feel perfectly portioned, inspired, and alive, the mark of a band on the brink of greatness and, if they play their cards right, wild success. There’s not a dull moment here, and the band—bassist/vocalist Johannes Andersson, guitarists Adam Zaars and Jonathan Hultén, and drummer Oscar Leander— reclaims some of the heaviness I missed from the last record along with their flare for drama. It’s a tremendous record, one that deserves all the applause it will receive. 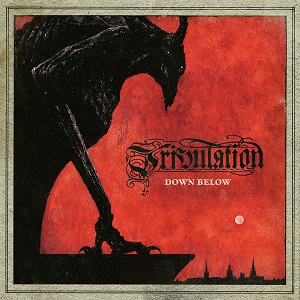 “The Lament” gets us started, as cold guitars make the skin chilled, but then the band follows up with a charging blast, and Andersson wailing over the chorus, “Would we see you if you came to us?” as he stares down the result of death. Keys swarm, while the pace chugs, and Andersson laments about his subject facing a situation where one can “never find a way back.” “Nightbound” is a tremendous track, one of the band’s best, and it’s built on a steady guitar line, a humid tempo, and a NWOBHM approach that gives the song a vintage edge. “I remember who we are!” Andersson howls, as psyche-laced soloing spills in, and the infectious playing holds you right up to the end. “Lady Death” has winds gusting and some excellent riffs, with the band building a punchy pace dressed in whirring synth and deathly horrors, back-ended by a nice thrashy finish. “Subterranea” lets keys plink like frozen rain before the song kicks into higher gear, and Andersson calls about “visions in the snow.” The track cools off again but ruptures nicely later, letting lava fill in the crevices.

“Purgatorio” continues to push the death theme, as this cut is built on eerie noise, dusk-like melodies, and a calming pace with cosmic breezes. “Cries From the Underworld” follows, as keys glaze like honey, and the band settles into more of a rock feel (you could point to Ghost similarities). The singing remains gruff, while spacious leads infuse oxygen, and the track comes to a cool sci-fi finish. “Lacrimosa” pounds away from the start, as the pace bloodies noses before the power pulls back. Bells and chants haunt, while the soloing bursts to life, spacey synth flows into the scene, and the cut ends in drama and sorrow. “The World” has keys plinking and a pretty strong lead guitar line, while the verses are moody and gothy. The fires keep raging, and the track ends in the place of fever dreams. Closer “Here Be Dragons” (they wisely decided to shelf this as the album title) begins with synth driving and the playing bruising, as Andersson howls, “Here be death!” as you’re set on a nerve-chewing wait for your own demise. The track is one of the darkest on here, as the wail of, “Don’t you hear the distant howling of the wolf?” lets you hear the end coming, which they deliver with dizzying playing and a tornadic approach that lands at the feet of a psychedelic head trip.

Tribulation are one of the bands that have the best chance of breaking beyond metal’s planes into something greater, and if they get there, “Down Below” will be a major reason. I know we’re supposed to question bands that achieve mainstream accomplishments as somehow no longer worthy of underground embraces, but to hell with that. If you’re good enough to surge, then, by all means, do it. The world would be a far better place if a band such as Tribulation was on the lips of mainstream listeners rather than some of the others out there right now.

For more on the band, go here: https://www.facebook.com/Tribulationofficial/