The power of nature is something we cannot fully comprehend. We have no control over it whatsoever, and for some odd reason, so many people lack the proper respect for it. But nature is greater than all of us combined, and its forces could leave us ground up in the dirt. It kind of has a track record of doing so.

That power is evident on “The Thundering Heard (Songs of Hoof and Horn),” the massive third record from Utah doom duo Eagle Twin. Over these four mammoth tracks, the band draws on folklore, the majesty of nature surrounding us, and the impact we have on our surroundings. As you can see from the album art depicting a herd of buffalo being driven over a hillside, it not only clues you in to some of the actions going on in these songs, it’s also a depiction of what’s happening to some of the creatures around us whose actions we affect. Or at least that’s my loose interpretation, though I have been known to be wrong. From time to time. This it the band’s first record in about six years, since 2012’s awesome “The Feather Tipped the Serpent’s Scales,” and it’s also their shortest at 41:31. But it’s also a concise, muscular package from vocalist/guitarist Gentry Densley and drummer Tyler Smith, one that brings massive amounts of power and conveys the relentless energy of the thundering herd from which the album takes its very-fitting name. It’s a total crusher. 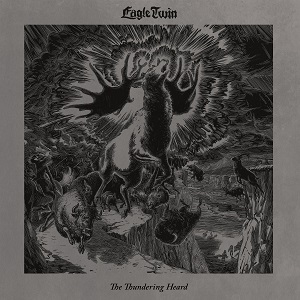 “Quanah un Rama” starts with Densley’s trademark throaty gurgle of a voice, as he wails about buffalo stampeding, with Smith’s drumming adding the proper earth rumbling. Cool dual guitar lines intertwine, as the band hits a bluesy patch, and psychedelic melodies work their way into the puzzle. The main riff returns and continues to clobber, with Densley’s vocals spilling back in and scarring, and corroded guitars adding fuzz. “The bees made honey in his skull,” Densley calls, possibly in honor of drone legends Earth, as the song comes to an end. “Elk Wolfv Hymn” follows with a trickling open, with Densley gruffly singing, “Sun burns through the sky.” Later he observes vultures circling while riffs gather, and the song takes on an even-tempered pace. “The sun is the fiery wheel,” Densley marks, as he’s often looking skyward in this track, and the back end has an eerie calming settling over everything.

“Heavy Hoof” has the singing at its muddiest, with Densley gurgling, “The heavy hoofs dance on your grave.” The track takes on a drubbing, filthy path, while the guitars ring out and hang in the air, and the path tramples everything in front of it like a runaway herd. The guitars unload fire toward the end, as the track comes to a blistering end that smashes bones. Closer “Antlers of Lightning” is the longest track at 14:23, and it starts with thick drone that darkens dreams, and a slow-moving approach pushes toward calculated punishment. Burly leads drive ahead, as the guitars are soaked with power, and the destruction charges hard until noise smears over everything. The final burst has drums breaking the earth’s crust to pour lava, the music slows to a painful lurch, and the track ends in a swarm of sound that stings your ear drums.

Eagle Twin’s might is nearly immeasurable as these two hammers and swagger their way through these great four tracks on “The Thundering Heard (Songs of Hoof and Horn).” The songs get into your head and fill your brain with chaos and devastation, and once they’re inside you, it’s impossible to eradicate them. This band keeps morphing ever so slightly with each release, making tweaks and thickening corners, and these songs are bound to bring the building down when they’re played live.

For more on the band, go here: https://www.facebook.com/eagletwinmusic

For more on the label, go here: https://www.southernlord.com/