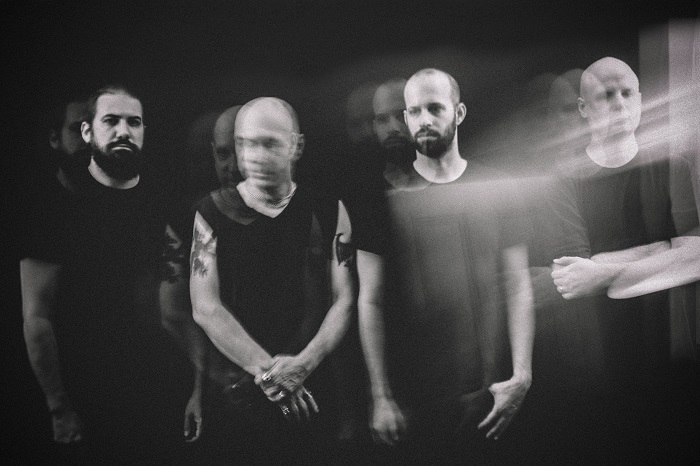 In the midst of a long drive over the weekend, I was treated to these billboards from some kind of Christian sect basically taking a shit on things most sane people have come to accept and respect (such as science!), along with some batshit phone number to call. One of them def insinuates evolution is a lie (fuck you, science!), which always makes me laugh.

Evolving is a purely natural phenomenon, and all of us are a part of it in one way or another. Some people change in their way of societal or political thought. Some find their career aspects shape shift as they gain more experience. Some people go from asshole to open-minded thinker. The opposite also happens, but that’s more de-evolution. Some of the more interesting bands in the world also evolve, and one that has done that dramatically is Infera Bruo. The Boston-based band that includes members of other notable acts such as Trap Them, Cul de Sac, and Pillory has returned with a thunderous, daring third full-length record “Cerement,” their first for Prosthetic Records after releasing their last album “In Conjuration” on Bindrune Recordings. We loved that one. This one also is a crusher. Their black metal has changed a lot and taken on more progressive and spacey elements, something that matches the personalities of these songs quite well. The band—Galen (guitars, lead vocals), Neutrino (bass, vocals), Germanicus (synth and effects), and Ardroth (drums, vocals)—has progressed nicely the past few years, and this record is bound to be one that takes some time to fully settle but also will shake psyches.

“Poison Waters” is a quick intro cut with eerie strangeness, winds picking up, and dusty acoustics, leading into “Shroud Enigma” and its massive melodies and driving guitars. The vocals are shrieky, while a proggy collection of clouds gathers, and psychedelic noises cut in and bring death. We then are sucked into the stars, as the vocals pierce, the tempo remains fired up, and we’re off to a blistering end. “Effigy of Reason” is a quick instrumental built on strange, spacey wooshes, acoustics, and a solar storm that begins to warm your face. “End Notes” kicks off with guitars charging, as the pace is enthralling, and the shrieks arrive to bloody lips. Clean singing emerges to add a different element before harsh wails return and rain down, the riffs get speedy and urgent, and synth and guitars burst, leading to a furious ending.

“The Lunar Pass” opens in a bath of proggy keys, as riffs begin to churn, and the pace tears apart sanity. Harsh growls and droning fire combine, as clean singing returns along with strange sci-fi keys that should chill your flesh. Guitars meander through stardust, while the storm kicks up again for one last explosion before all fades into the night. “Draped in Sky” has a calculated starts that slowly does damage, as spindly guitars work their way into the scene, and the growls begin to engorge. The track gets creaky but spacious, while clean singing brings in cooler breezes, and the song goes from fluid wonder into prog-infused hell. Weird noises spread, the guitars charge hard, and the track twists and slices to its finish. “Scorne” has guitars jarring before a huge black metal surge arrives and covers the earth in molten lava. Savage growls erupt as the band drives dangerously to the brink, stomping and clobbering until only ash is left. Closer “Temporial” is an instrumental closer that feels similar in sense to the other tracks like this that came before it, almost as if it’s closing the book on that triptych with strange sounds, acoustic washes, and calming, buzzing passages that feel from an alien world.

Infera Bruo not only should have their profile raised with Prosthetic behind them but also should find a hungrier audience of open-minded listeners with the thunderstorm that is “Cerement.” It’s the portrait of a band growing and evolving, embracing every new aspect along the way. The cosmic wonders and atmospheric drama woven into this record makes the album equally fascinating and devastating.

For more on the band, go here: https://www.facebook.com/InferaBruo/

For more on the label, go here: https://www.facebook.com/prostheticrecords/