It’s been a long week already, and it seems like as good a time as any to dig into something a little smaller yet just as heavy and weighty as anything else. There’s merit to putting on a more compact collection that can get inside of you, break some bones, and leave you heaving on the floor.

Alabama-based death metal horde Ectovoid are back with a three-track EP (out on 7” vinyl and cassette) “Inner Death,” their first music since a split effort in 2016 and their last full-length “Dark Abstraction,” released in 2015, and it still finds them grinding away with dark, muddy death that leaves ample bruising. The three cuts here, spread over an economical 12 minutes, are more of an appetizer before we hopefully get another full record from the band, and despite it being a smaller serving, it still will leave you filled up for the time being. The band—bassist/vocalist C.B., guitarist C.S., and drummer C.M.—haven’t lost an ounce of their intensity and violent proclivities, and this new EP will make anyone happy who cares to dine on the rotting carcass of true death metal. 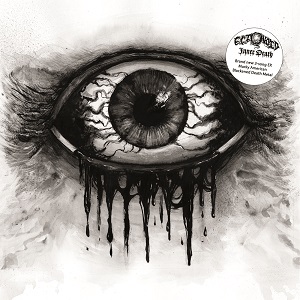 “Internal Inversion” is a blast of a start, as it gets right at your throat immediately with echoed growls and an assault that comes right for you. The music sounds like crusty old death, as chaos bleeds from the cracks, and everything ends abruptly. “Archaic Memories Unearthed” smashes open with the leads blistering and growls destroying before the pace changes on a dime, with the guitars surging into the mud. The trudging continues over the body of the song, releasing cavernous power and eventually a burst of speed that thrashes to its finish. Closer “Isolation in Mind Continuum” has guitars firing up, with the music bubbling and smothering, blasting in classic death-style soloing that’ll burn your blood. The vocals strangle as the song settles into a death groove, punching away as the track fades into eerie strangeness, odd chants, and misery.

It’s been nearly a half decade since Ectovoid dropped a full-length record on our skulls, but this EP “Inner Death” is a strong tide-you-over release until they conjure a complete album. Hey, we’re not bitter, as these things take time if you’re going to do it right, so it’s nice having something in which to sink our teeth for now. This is a mangling blast that’ll hammer you before you’re even aware of it.

For more on the band, go here: https://www.facebook.com/ectovoid

For more on the label, go here: http://www.helterskelterproductions.se/