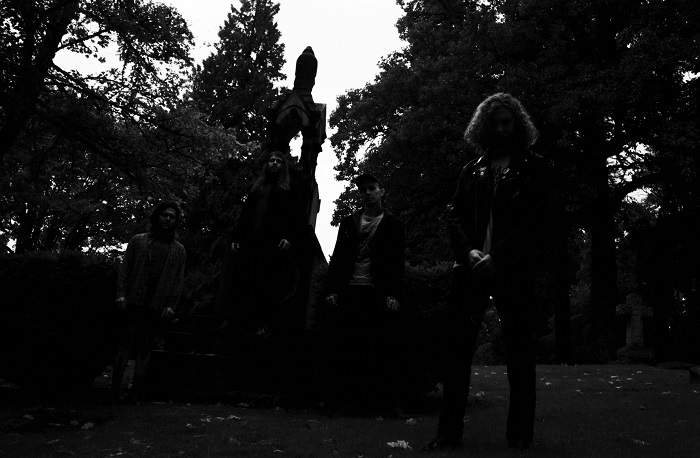 Staring into the face of desolation and horror is not an easy thing. It cannot simply be overcome by being mentally tough or sucking it up or whatever silly advice people spew. The only way to handle the situation is to refuse to blink and just take it on, no matter how bad it feels. I’m describing me watching Tom Brady seemingly ready to go to his 43rd straight Super Bowl as I type this. Utter terror.

Taking on “Living Tomb,” the ugly and guttural debut record from death/doom mongers Ossuarium, feels just like confronting that pit of terror and disgust that haunts you, realizing your only means of survival is being the one still breathing in the end. Over eight tracks and more than 40 minutes, the band—guitarist/vocalist Daniel Kelley, guitarist Nate McCleary, bassist Jeff Roman, drummer Ryan Koger—unleashes terrifying, gloomy playing that revels in negatively and filth, reminding of death’s putrid roots and the bands that started that effort who also rolled around in doom’s coffins. Nothing feels good, and there isn’t even a hint of light, so all that’s left for you is to dig in for a bruising battle that’ll leave you sore and bloodied when the thing finally brings mercy at the end.

The record opens with an intro cut that sets the stage for what’s to come, almost like the coffin lid creaking open, leading into “Blaze of Bodies” that gets going with doomy trudging and pummeling playing. The growls sound like they come from deep within the gut, as the track lurches ahead, leaving a trail of plasma behind, before the pace kicks up, the music chars, and the horror ends in furious shrieks. “Vomiting Black Death” is a slow burn as it chugs along, later dissolving into clean playing and a foggy murk, and almost three minutes in, we finally hear the growls arrive to curdle blood. Old-style death guitar work smears and brings fiery glory, with the back end of the song landing heavy punches, the grisly growls slicing, and the track ending abruptly. “Corrosive Hallucinations” has guitars swelling along with the growls, with the riffs getting slurry and dizzying before destruction reigns again. The devastation is impossible to shake, as mournful melodies are woven into the mix, cascading and pelting the ground with darkness enveloping and any hint of light being choked away.

“Writhing in Emptiness” hammers heavily, as the guitars blister, and we’re headed straight into a pool of muddy death. Later on, the leads glimmer, and the soloing has a bit of a Pink Floyd-style spaciousness to it, as sorrow arrives, and you’re pounded until the bitter end. “End of Life Dreams and Visions Pt. 1” has guitars awakening and wafting strangely, as a throbbing pace gets under your skin, and monstrous fires rage and melt faces before the track ends suddenly. “Malicious Equivalence” thrashes from the start, as the death-doom sickness spreads, noise sizzles behind, and the track hangs in the heated air, reveling in the humidity. From there, the guts are opened and distributed in the dirt, the track drubs, and final yelps salt the wounds. “End of Life Dreams and Visions Pt. 2” ends the record by driving through hell, with clean lines threaded through the devastation, and the riffs later boiling over and sparking violence. Soloing emerges and splatters, with the growls upping the intensity, and the track eventually melts into the earth, leaving behind a sticky, crusty mess.

The dashing of hope and the onslaught of ugliness dominate “Living Tomb,” a record that should push Ossuarium into consciousness of anyone who hungers to dig deeper into anything that’ll make the soul darker and more diseased. This record is black from the inside out, and as long as you don’t mind feeling a tidal wave of negativity, then you’ll likely find yourself in the presence of a new favorite band. This record and band deliver a mountain of agony, and only those willing to battle that force will come out on the other side still in one piece.

For more on the band, go here: https://www.facebook.com/ossuariumdeath