There’s a big tag team wrestling tournament coming up this spring that revives the spirit of the old Jim Crockett Sr. Memorial Cup by staging that same event in the modern era. This is part pro wrestling site, remember. So, shoosh. Anyway, I was thinking that if we could take metal bands, combine them into a singular person, and have them team up, who would be the most formidable force?

You’d be hard pressed to find a better, mightier union than the two bands we’re taking about today due to their hammering new split effort, that being Denver sludge beats Primitive Man and Portland, Ore., doom beast Hell, who have three new tracks among them to leave you totally defaced and whimpering. Primitive Man’s segment focuses on the decay of society, something we see going on around us every single day and their plight to immerse themselves in the pit of negativity, but in a way to help you lash back out yourself. As for Hell’s singular contribution, sole member MSW. Turned inward to face the everyday struggles with anxiety and depression but in a way to strengthen you from those battles. If might be the only way you can truly fight back against the corruption destroying this world, which is the true enemy anyway. 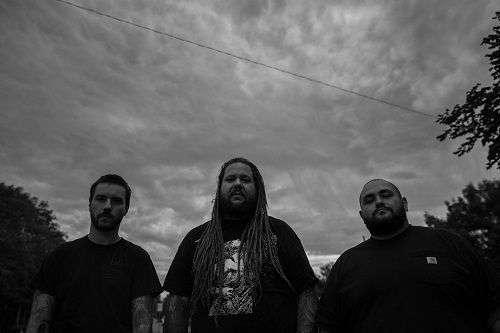 Primitive Man get started with “Oily Tears” that rolls in feedback before lurching like a crazed monster toward its pretty. Heavy howls from Ethan Lee McCarthy drive fists right into your chest as the track takes on the feel of slow, long torture designed to achieve submission. The track corrodes in total misery, bludgeoning and shoving your face in the mud before the track  out in a field of noise. “Pitiful & Loathsome” has noises shrieking while the pace slowly pummels, growls gurgle, and the track tears itself open. Your senses or clobbered completely as animalistic shrieks rain down, and nastiness is dealt in heaping servings. There’s not a hint of mercy through this whole thing, as the track ends abruptly, feeling like breath has been snatched from your lungs. 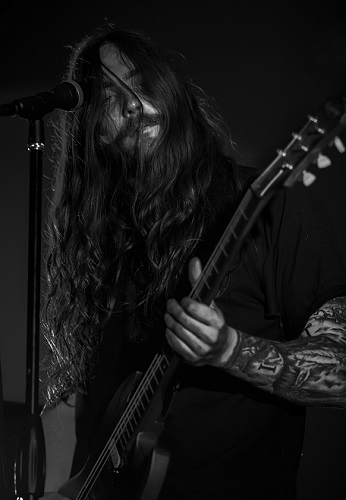 As for Hell, M.S.W. said he was trying to get back to the sound of the first Hell album, grittier and meaner as opposed to 2017’s great other self-titled affair that has more swagger. M.S.W. wastes no time at all, dumping a bucket of feedback that sets off sparks, leading to sludgy riffing, a massive well of intensity, and shrieks that tear through the flesh. This is slow-driving doom fire, as the riffs spew oil, noise pierces your hearing, ands clobbering madness then heads into a psychedelic sheen. The song floats and chills for a stretch, letting warmth wash over your brain, before the guitars poke through, and everything rages back to life. As the track goes, things begin to feel slurry and drunken, leaving you clutching for the walls, before the track spirals out in echoes.

I don’t know what these bands’ finishing maneuver would be for conquering the Crockett Cup tournament (Doomsday device sounds quite fitting), but that’s a fantasy scenario anyway (I think!) What deserves our attention is the clubbing, fire-breathing music Primitive Man and Hell smear on this devastating split collection. These are two of the heavier (musically and philosophically) bands in all of underground metal, and taking either of them on individually is face-bruising enough. Now try facing them both at the same time!