Lots of times on these pages, when a band returns after a long absence, we talk about finally having new music in our hands, as if that’s something the band owes us all. It’s not like band members are sitting around doing nothing in between records, and often there’s a really great reason why you haven’t heard from an artist over an extended period for myriad reasons from creative processes to tragedies.

Chicago-based instrumental powerhouse Pelican haven’t come around with a new record in six years, with their last one, “Forever Becoming,” landing in 2013. There have been some live albums and smaller releases since then, and the band also has been doing shows (I finally got to see them for the first time last summer at Migration Fest), but now we have their long-awaited sixth full-length “Nighttime Stories,” a record with a lot of tumult, frustration, and heartbreak behind it and one of their heaviest albums ever. The band—guitarists Trevor de Brauw and Dallas Thomas, bassist Bryan Herweg, drummer Larry Herweg—lost close friend Jody Minnoch, vocalist for Tusk, a group that also included de Brauw, Larry Herweg, and former Pelican guitarist Laurent Schroeder-Lebec. Minnoch was the one who coined the title “Nighttime Stories” and planned to use it for the next Tusk record, so it is used here in tribute to their lost friend. Add to that, Thomas also lost his father during the writing process for the new album, and he’s paid homage on the record’s opening track (with Thomas playing his dad’s Yamaha acoustic guitar). Add to that the chaos going on in society and other events affecting their lives, and you get a fiery, melodic, emotional record that will have your heart burning inside your chest. 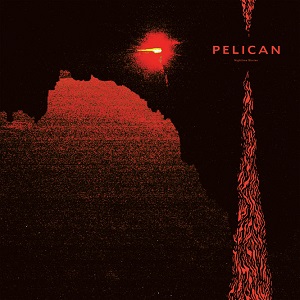 “WST” opens the record, a track set in dark, moody clouds as acoustics settle, electric guitars slide in, and a dusky atmosphere paves the way for “Midnight and Mescaline” that delivers a punchy pace right away. The melodies loop you in as things take a burly turn, chugging and chewing its way, blasting doors, and letting riffs continue to build pillars to the stars before things come to a muscular end. “Abyssal Plain” lands blows as the drums clobber, and a catchy tempo takes you for a ride. The riffs twist and reveal thick layers of sinew, while the back end gets smoky and doomy, smothering to the very end. “Cold Hope” has sinister guitars stretching out as things get dusty and immersive, with things feeling slightly off kilter as it goes. The track is both melodic and crushingly heavy as the riffs blister, the track gets crunchier, and the leads begin to soar while the drums decimate the senses.

“It Stared at Me” unveils colder guitars trickling like a chilling rain, a nighttime vibe setting itself up, and slide guitars adding even more ache to an already bruised song that sinks into the desert and buries itself. The title cut opens with muscular pounding, the track bashing away, and the guitars snaking themselves through the scene. The weight kicks in even harder as the melodies pick up grit, doom hammers drop, and the band thrashes out to the end. “Arteries of Blacktop” smudges faces while the bass bends around corners, and the guitars heat up. Things settle into a cloud and ease before everything ignites again, dark riffs envelop, and the track deals more scarring before trickling away. “Full Moon, Black Water” ends the record and starts gently enough with noises simmering, guitars creeping, and then we’re in full panic, feeling a bit grungy and rough. Riffs gets muddy and more aggressive, ripping away at the earth and letting scraps fly. Halfway through, we’re boiling in lava, guitars shriek, and the mud cakes and spatters. Things ease later and get dreamy, letting you come back to earth and find your footing again.

Pelican’s members have had to deal with a lot in the past six years, and their return on “Nighttime Stories” is triumphant and explosive, the sounds of a band reborn. They’ve dealt with the blows life has had to offer but refused to blink in the face of opposition. Their strength and fire are splattered all over these nine songs, with Pelican emerging from the other side a tested but more formidable band.

For more on the band, go here: https://www.facebook.com/pelicansong

For more on the label, go here: https://southernlord.com/