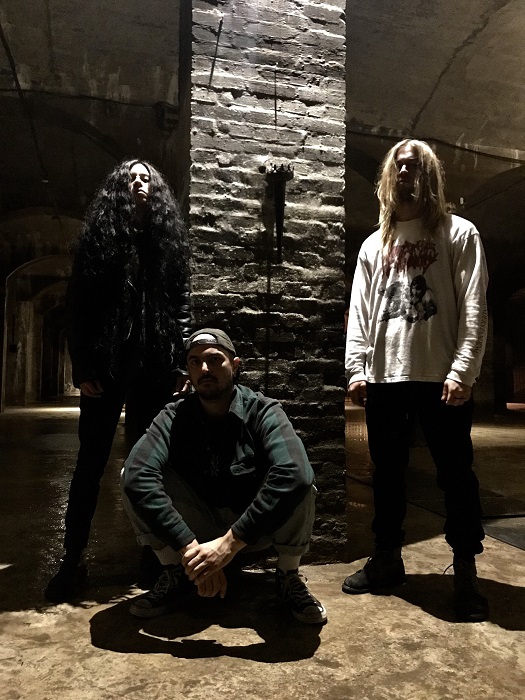 Not that there’s ever a good time for it, but the hot months are the worst time for decay. When I was a kid, we lived near the woods, and a deer bit it somehow, and the stench carried over the neighborhood for days until the source was discovered. That scent is, like, imprinted in my brain and never will go away. In fact, let me go puke.

Where was I going with this? Oh, right, “Steeping Corporeal Mess,” the debut LP from Pacific Northwest-based death crawlers Fetid, who created a record that’ll stink even worse now that it’s hot and unforgiving here in the U.S. Every trip I’ve had with this has taken me back to those days when the disgusting deer corpse was rotting away, and all we could smell was death. These five tracks are perfectly encapsulated simply in the title of the record, as that’s exactly what this thing sounds like. It’s putrid, disgusting, and practically bubbling in blood and guts not-so-freshly drawn from its victim. Perfectly dosed over 32 minutes, the band—guitarist/vocalist Clyle Lindstrom, bassist Chelsea Loh, drummer/vocalist Jullian Rhea—unleashes the worst of the worst, doom-smeared death metal that’s often delivered torturously slowly but that also hits the gas now and again to ensure your stomach gets jerked around, and you get really nauseous.

“Reeking Within” gets us started amid noise chewing at your nerve endings and then a trudging wave of death going for your neck. Grim growls slither through the dirt while the track lurches along, with the pace leaving bruising. The bass then fires up and the band batters your senses, picking up speed later on and splintering bone, the growls devastating, and the track crushing to its final resting place. “Cranial Liquescent” has thick bass lines providing a foundation while the playing causes dizziness, and the growls boil in bodily fluid. The leads go off, while the screams pierce your ear drums, and then things slow down into humid doom. The area gets smudgy and feral as things re-open, the sludge makes your footing almost impossible, and the track levies its final punishment.

“Consumed Periphery” is utterly brutal, picking up thickened blood and then opening the gates to complete terror. The song goes off into speed and dirt, blinding you and leaving you struggling for corners as the leads soar and everything ends in a mess of discarded tissue. “Dripping Sub-tepidity” will have your head spinning at first, as the song is fast and smothering as it tries to bash in your skull. The bass playing begins to pile on, and then an insane assault breaks out with the leads catching fire and the vocals sinking its teeth into your flesh. The guitars spiral out of control, the playing stymies, and everything turns black. “Draped in What Was” ends the album with an extended intro complete with B-movie-style synth, almost like the opening credits are rolling. Then the doomy chaos emerges, as the track takes its time laying waste, destroying wills and crumbling the earth. Soot is smeared in mouths and faces while infernal growls utter their last, and the track ends in putridity.

Fetid’s arrival into death metal’s filthy ranks is a very welcome one, albeit one that’ll have your guts churning for weeks on end once you finish tangling with “Steeping Corporeal Mess.” This record is mean and nasty, with very little regard for pristine performance or spit shine, as they just go for the jugular and remove any sense of hope. This is that rotting body in the midday summer sun, providing a disgusting experience for everyone around it and making you want to cover your eyes, even though you know you can’t look away.

For more on the band, go here: https://www.facebook.com/fetid.death