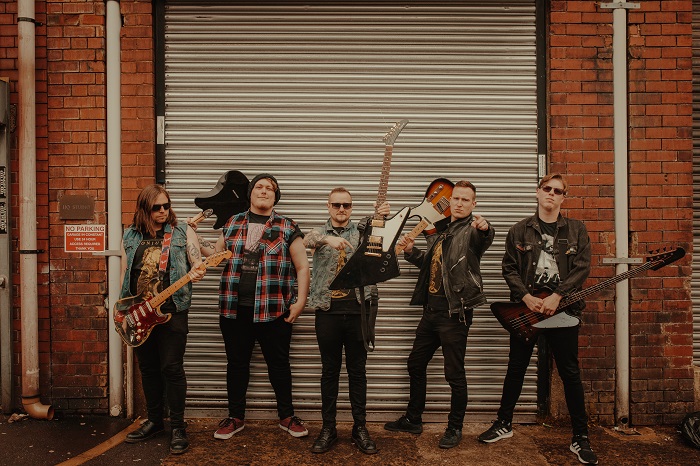 The world can be a miserable, dangerous, horrific place. Just this past weekend in the United States, we saw two more massacres in an endless line of them, and once again people are trying to find answers and a way through even more pain. It can be a lot to navigate sometimes, and just having a distraction or something to bring good feelings into the mix is needed desperately.

While they might not be able to solve all the negativity people feel all over the world, two UK bands Pijn and Conjurer are at least attempting to scrape from joy’s barrel and spread it to whoever wants to hear them. The band combined for a four-track joint effort “Curse These Metal Hands” that purposely pushes away from the darkness and more toward things that can be fulfilling and not utterly soul sucking. They also point out the merits of getting stoned and hearing dogs snore which, if you don’t at least like the latter, you might need a huge dose of what these bands are bringing to the table. Combining Dan Nightingale and Brady Deeprose from Conjurer, both on guitars and vocals, and Joe Clayton (guitars/vocals), Nick Watmough (drums/vocals), and Luke Rees (bass/vocals) from Pijn, the two forces put together some heavy, emotional, utterly rewarding songs that really do a wonder if you’re feeling dark shit lately. It’s not going to cure you, but it might get your blood flowing better for a while.

“High Spirits” opens the record with calm and breezes, letting the atmosphere take over before the hammers begin to strike. The track explodes into a burst of emotive playing, as raspy singing drives the way, and then powerful screams join the fold to add some grit and danger. Later on, things are punishing but colorful as guitars soar through the air, two leads bring a wave of metallic nostalgia, and the track comes to a glorious finish. “The Pall” has cool riffs and slinky playing before the track turns gazey. Just then, things take a sludgy turn as cement-thick trudging arrives, and mouths are bloodied. A brief respite from the madness leads to howls returning, the drama building, and everything ending neck deep in a giant pool of mud.

“Endeavor” is the shortest track at 2:21 and the only one that doesn’t clock at least eight minutes. It makes the most of its time burying you in melodic sludge as growls put you in a hammerlock, bodies are shattered, and the track comes to a volcanic end. “Sunday” closes the album, and it’s the longest song, clocking in at 10:17. The track has a huge feel as a deluge of sound overflows before temporarily going calm. Out of that comes massive roars, punchy playing, and a wall of ferocity that’s impossible to avoid. The track’s blood then runs ice cold, as guitars chime and echo, and the flow bleeds further toward serenity. Then the track re-engages with its power as heartfelt playing fills the room, the pounding makes your chest heave, and the track slowly winds down with twin guitars cutting through and the end acting as the cathartic crescendo you didn’t even know you needed.

Metal and heavy music tend to revel in negativity and pain as a whole, because that’s what it happens to do really well. But Pijn and Conjurer prove on “Curse These Metal Hands” that it can be healthy and productive to take a break from that and try to see the positives. It’s sometimes nearly impossible to do that, so it’ll take some work, but the end result is a rush of sound and two bands that are trying their best to help you through, if only for a little bit.

For more on the label, go here: http://www.holyroarrecords.com/