It’s getting close to the time where we’re reviewing the music that came out during the entire calendar year, and typically I keep a list of everything covered on this site to make that venture easier. In having just gone over all that music that came out in 2019, it’s weird to discover that although a lot of great stuff has been dropped on us, there’s still a lot that just melts together in the mind.

That’s not to suggest there aren’t things that came along that absolutely stand out, and one of those is arriving later in the year in wider form, that being Wishfield’s debut album. The music was released by the band in April, but Tridroid is giving it cassette treatment that’ll be arriving in mailboxes pretty soon, and it’s a fascinating, jarring listen that’s nearly impossible to fully explain. It’s a combo of ’90s indie-style rock, experimental strangeness, and some swaths of black metal blended into this eight-track album, and it’s a record that could soothe, excite, or induce panic, depending on the listener. The band—vocalist Mariah Timm, fretless guitarist Nick Stanger (also of Ashbringer), fretless bassist Andy Meyer, drummer Theo Galetka—puts together a record that washes over you, intoxicates you, and at times startles you as it spills over you consciousness. 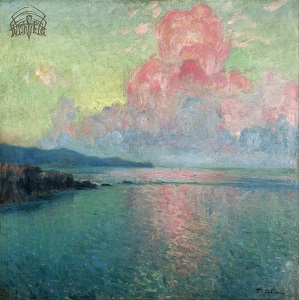 “Something” starts the record and gives you an early indication into the ride on which you’ve just committed to taking. The guitars are slurry and static-scuffed, making it feel like the room is spinning before Timm’s wild shrieks take over and cut you apart. The choruses are more melodic, with Timm’s voice surging, even getting breezy in spots as she calls, “Water is rising, feet sinking into sand.” A strange, frenetic pace comes from there, as Timms finishes us off with the promise, “Change is coming soon.” “Earth, Venus” is a strange instrumental with guitars scraping and what sounds like intergalactic interference, making it feel like two worlds are trying to bounce signals off each other. “The Fishbowl” has aggressive guitars and jolting yelps, with Timm’s vocals turning to shrieks while the guitars race and loop. Guitars slide and begin their turn toward space, fading into the golden horizon. “Shallow Heap” opens slowly, trickling, and the singing is pretty high register, coming off as a stinging swoon. The chorus settles as scratchy guitars poke at the skin, shrieks burst, and the song explodes to its end.

“Nothing” gets into a calculated stream as the guitars slither, and Timm warns, “Watch out for broken glass and coins thrown at your head.” The track takes its time unfurling while the singing flutters before the speed kicks up, the guitars loop with texture, and the guitars settle over top and darken shadows. “Swimming, Dreaming” is a quick cut with harsh guitars, detached moans, and sounds echoing, pulling into “Three Seconds (Radio On)” that has staggering riffs and really strong singing. The track moves toward something like a screamo/post-hardcore bend from the early 2000s, when the styles still had a healthy heart, as a colorful burst pushes in. Wordless calls give off catchy vibes while the track explodes on its way out. “Isolated People in Isolated Rooms” closes the album by unleashing black metal strains and splattering guitars before Timm’s singing comes in and soars toward the sky. There are mesmerizing stretches that are cut down by a speedy squall, and then the track turns into a bizarre alien sendoff that blips out into an ocean of echoes.

Wishfield’s tremendous debut record is one that definitely deserves this revisit later in the year, and if you’re looking for something to tangle your brain and send you on a bizarre journey, you might want to grab this cassette. From the smearing instrumentation to Timm’s sometimes stabbing, sometimes soaring vocals, there’s a lot here in which to sink your teeth. Plus, it’s nice to have a record this interesting that makes its mark after a year of being bombarded by a ton of music.

For more on the band, go here: https://www.facebook.com/wishfieldband/

For more on the label, go here: https://www.facebook.com/tridroidrecords