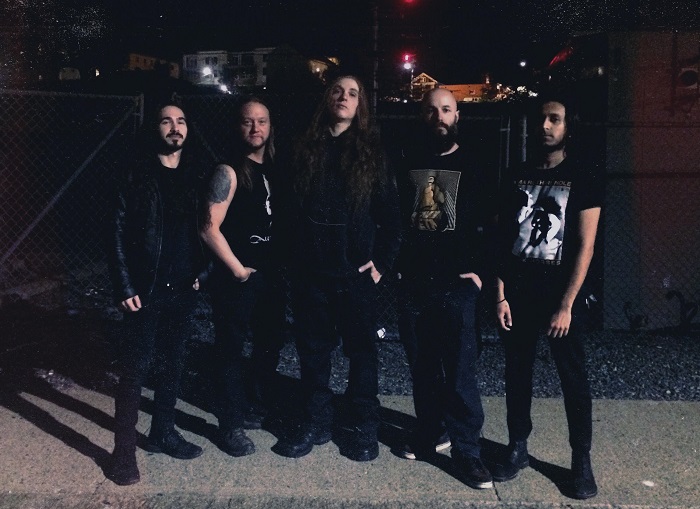 The day after a major holiday here in the States has the tendency to leave us sluggish and lying in piles, with our bodies still trying to work its way through the endurance test it faced yesterday. Yet, it’s not time to lie down and take it easy at all. What better opportunity to put your mind and body through a sort of metaphysical workout musically the day after heavy intake?

With that said, get ready to be wrestled to the ground by progressive black metal force In Human Form, who are about to deliver their impossible-to-classify third record “III.” Really, complicated compositions and metal that’ll challenge you heart and soul is nothing new for this Massachusetts-based wrecking unit, as they’ve been doing this thing going on a decade and a half now. As their time has gone on, they’ve refined their machine, sharpened edges, and thrown caution to solar winds, which they do on a whole different level on this three-track, 47-minute album. You’re reading that right, so as you can guess, you’re in for an enthralling endurance test when tackling these songs. The band—Patrick Dupras (vocals, lyrics), Nicholas Clark (guitar, alto sax, keyboard, samples), Dave Kaminsky (guitars), Shalin Shah (bass), Rich Dixon (drums)—is joined by special guests Evan Crandell (alto, tenor, and baritone sax) and
Hannah Pitkin (vocals) on this consciousness-expanding collection that demonstrates that you shouldn’t abandon your musical year in October or November, because relevant, striking records are release well into December, with this being a pulverizing test case.

“Apocrypha Carrion” opens the record with a blast as shrieks hammer away, the bass bubbles, and guitars slither through spacious terrain. The band sets an early tone of daring playing, sprawling away while the vocals are wailed, leading to a dramatic shift to heavily proggy waters that then soak the land. Dupras’ shrieks explode as he calls, “You’re grasping at straws,” following with, “You’re feeding on lies, you’ll be thrown to the lions.” Soloing erupts and roars as Crandell’s saxophone bursts in, feeling like a 1980s blast into strange territory while the leads flutter and cause adrenaline to surge. The track then slowly trudges as the playing spills gloriously, rushing to the drowning finish for the 18:37-long track.

“Weeping Stones” greets you with synth waves and a dialog from Clark about the Medusa, begging for her arrival. The journey is calm for a while as the sax blends in and jazzy leads follow, as an icy flow is achieved before heat melts that away. The pace then charges up, bringing a wall of horns with it with the music sweeping dramatically to the mammoth closer. “Canonical Detritus” is a 20:28 adventure that quakes the ground with devastating shrieks striking while the pace is fluid and burning as the guitars smash through prog castles. The growls get darker and devious as the brain-tangling playing snarls and tricks, spitting into the void and getting chaos in return. A nice run of classic-style metal floods as the sax rolls in again, while the punishment cools and lets the blood congeal. It isn’t long until any hope of calm is forever disrupted while black metal-style melodies rage, and Dupras wails, “The hour has come, the event horizon.” The track pushes into a melodic haze as emotion is at its apex with the music bustling and the track coming to a punishing end that feels like its pumping blood into the stars.

In Human Form’s music long has been a challenge to fully absorb mostly because there are so many different elements to search through, and every time you think you have answers, they get scrambled again. “III” keeps going their furious pace to build new metallic structures that act differently than what came before them and force you to reimagine what heavy music sounds like. This isn’t a record you can put on and let simmer in the background; it demands total participation otherwise you’ll be left painfully behind, struggling to close the distance.

For more on the band, go here: https://www.facebook.com/inhumanformihf/