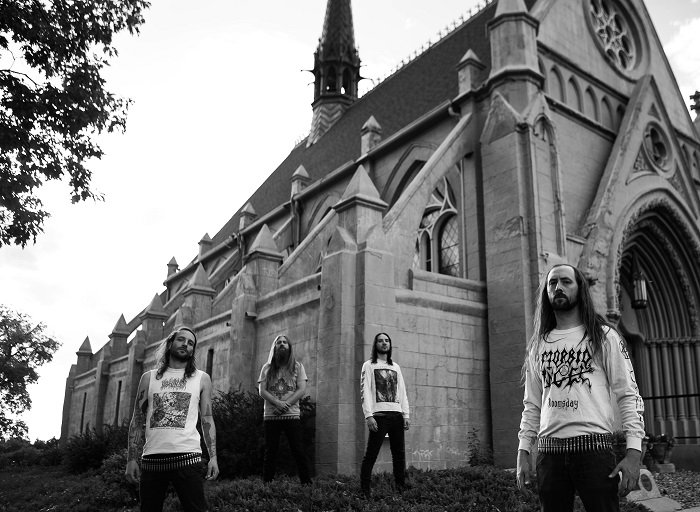 There are a ton of conspiracy theories out there about alien DNA being woven into this earth, our origins coming from the stars, and visits from our predecessors having occurred numerous times. The question of us being alone in this universe is a preposterous one because there’s not a chance there isn’t life elsewhere (sorry, religious people!), and our study and concentration of what else is out there is a subject that keeps some people up at night.

Denver death metal alchemists Blood Incantation have had the cosmos in their DNA, and I’m not talking about the physical makeup as humans. Their music is consumed with and powered by what lies in the great unknown beyond our world, and they unravel even more of those mysteries on their mind-tangling second record “Hidden History of the Human Race,” one of the most anticipated albums of this entire year. There’s a lot of sense behind people’s fervor for new Blood Incantation creation. First, their debut “Starspawn” was a high-water mark in forward-thinking death metal, an album that established them as one of the sub-genre’s mightiest acts. Second, that lathering of delirium for a new record is based largely on wondering where they’d go next and how their sound would expand. That next step is achieved for sure in ferocity and experimental weirdness as the band—guitarist/vocalist Paul Riedl, guitarist Morris Kolontyrsky, fretless bassist Jeff Barrett, drummer Isaac Faulk—puts it into intense high gear, ripping and knifing through your consciousness and into your soul. 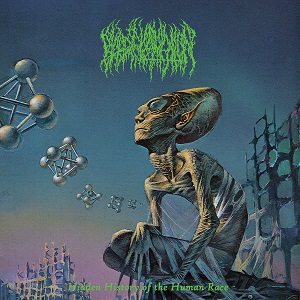 “Slave Species of the Gods” starts the record by tearing the lid off everything with massive riffs sweeping, the growls setting in, and everything coming to a splatter. The guitars shift and crush as the vocals continue to rage, and delirious leads light everything on fire. The soloing ignites and explores while raspy wails strike, and the track spirals out into echo. “The Giza Power Plant” lathers with loopy guitar squeals and a mauling bass leaving facial bruising. The track then shifts to thrashiness before a Middle Eastern-style melody calms and sweeps, mentally stimulating the darkest regions of your mind, as the drums proceed to powder bones. Growls and detached speaking work together as the track begins to melt rock, as a furious intensity erupts, bringing everything to a complex, brutal finish.

“Inner Paths (to Outer Space)” is mostly an instrumental piece that’s an atmospheric trail blazed, blowing into the stars, with voice transmissions messing with your mind. The music turns hypnotic and then violent, as the band chugs, growls burst through the surface, and the playing dissolves into weirdness. “Awakening From the Dream of Existence to the Multidimensional Nature of Our Reality (Mirror of the Soul)” is the mammoth closer, an 18:02-long smasher that takes up half the album’s running time. Cymbals crash before the track begins to trudge, the guitars twist and confound, and the growls dice flesh. The guitars go off as the tempo gets more aggressive, spitting speedy trickery that turns into savage chaos. Suddenly synth comes in and floats like an alien cloud, injecting sci-fi mystery, leading into a proggy burst that spreads and infects. The track heads into a calculated burn, thundering heavily before soulful soloing erupts, making strange patterns, and ending in acoustics and galactic winds that deliver alien fogs.

Blood Incantation’s rise to death metal’s supreme overlords came from their furious playing and their refusal to deliver music that’s anything less than mentally warping. “Hidden History of the Human Race” adds to their already growing legend, as it’s bound to be a record dissected and discussed for years to come. It’s terrifying that Blood Incantation really are still in their early form, because who knows what these guys will sound like 5, 10 years from now?

For more on the band, go here: https://www.facebook.com/astralnecrosis/