If your entire body is riddled with anxiety right now, and you’re having a hard time getting through the day without having to sit down and take deep breaths to avoid freaking out, definitely know that you’re not alone. It feels like 2020 has been a relentless assault of one bad thing after another, and it seems that way because that’s exactly what it has been.

If you’re interested in a record that sounds like 2020 feels, NYC death dealers Pyrrhon have something for you with their fourth album “Abscess Time,” a collection that’s going to be really hard to top from a manic explosion standpoint. Simply tagging the band as a death metal group is a gigantic limitation as they pour in elements of noise, free jazz, and hardcore, and so many other sounds that create this insane display that comes for you from the start. And this music was put together before the current COVID situation! Yet, they observe the crumbling American experience from race relations (no way they realized just how timely this would be), continuing gentrification, climate issues, the tyrannical government, and other matters that have done their worst on most out our psyches. The band—vocalist Doug Moore, guitarist Dylan DiLella, bassist/vocalist Erik Malave, drummer Steve Schwegler—spreads this fury and madness over 12 songs and just about an hour that absolutely tangles you and reminds you of the harsh reality that’s right outside your door. Also, Caroline Harrison adds her immense artistic talents to a cover that might make you feel corroded and disgusting inside. Nice touch. 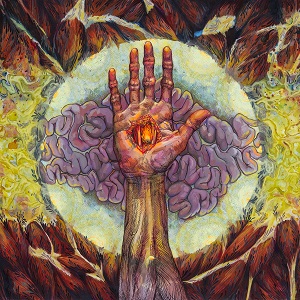 The title track gets started with guitars boiling and Moore’s cries already digging under your fingernails. The noise builds as the guitars have a strange Southern vibe while voices crackle, and digital corrosive floods as things come to a warped windmill of a finish. “Down at Liberty Ashes” starts and ends with a clip from “Taxi Driver” and in between is engorged death and incomprehensible chaos. The shrieks catch fire as they work amid the tumult, and odd shifts give way to rubbery playing and a scraping abrasion. “Teuchnikskreis” is a quick burst that lasts just over a minute as it grinds and splatters, serving of a horrific bite of hell. “The Lean Years” stabs wildly as the guitars slurp and the vocals are unhinged. Sinewy leads cut deep to the bone as the atmosphere is rich for a panic attack, bursting thunderously as the vocals pick you apart. Guitars then sting as Moore eats at your psyche before the track ends in sweat and tears. “Another Day in Paradise” starts with a clip from “Network” before things get off to a guttural lurch. The guitars are unleashed and bring violent zaniness while the vocals contort dangerously. Harsh shrieks split lips as the pace stabs away as things shapeshift into undiscovered terrain. The guitars sweep, the shrieks rain down, and the track finally melts into hell. “The Cost of Living” lets slurry guitars sprawl as gurgling growls menace and a warped trail boils. A dizzying assault is launched as the guitar work staggers, and your central nervous system trucks hard. Gross growls well up as the soloing drunkenly brawls, and things speed up and come to a mauling end.

“Overwinding” is another fast one that runs under two minutes and delivers wacky playing and a general mind fuck that wrestles you into the mud. “Human Capital” brings sludgy guitars and a weird journey that eventually goes off. Guitars try to leave you in the dust as it challenges your psyche before it turns unexpectedly straightforward (well, for them) before ending in snarls. “Cornered Animal” punches wildly as crazed howls let loose, and the guitars jab you in the chest. The track turns thrashy and edgier as Moore’s words seethe coming from his mouth, and the playing slices to the spine. “Solastalgia” is a bizarre instrumental that is a like walking into total darkness, knowing the knife is coming, and still being surprised when it opens you up. “State of Nature” lets guitars loose while the vocals burn with acid, and the bassline wraps its tentacles around your neck. The playing changes up with no warning, teasing your mind as noise glazes and the band smashes into you with reckless abandon. “Rat King Lifecycle” brings this madness to an end by letting strange noises encircle and roars crush. Crazed shrieks melt the earth while the playing breathes fire and burns off your facial hair. Strange chants entrance as horrifying shouts work on injured nerves, bending the edges, dicing flesh, and ending as things shift into space.

Nothing in Pyrrhon’s world ever can be described as conventional, as they bring the challenge with every release and make you wonder what the hell you just witnessed. If anything, “Abscess Time” ups the ante in every way conceivable, bending this band well past death metal’s boundaries into something that is entirely their own thing. This record is manic, anxious, charmingly irritating, bludgeoning, and a completely different monster than any you’re encountered. It crushes each and every time.

For more on the band, go here: https://www.facebook.com/pyrrhonband

For more on the label, go here: https://www.willowtip.com/home.aspx