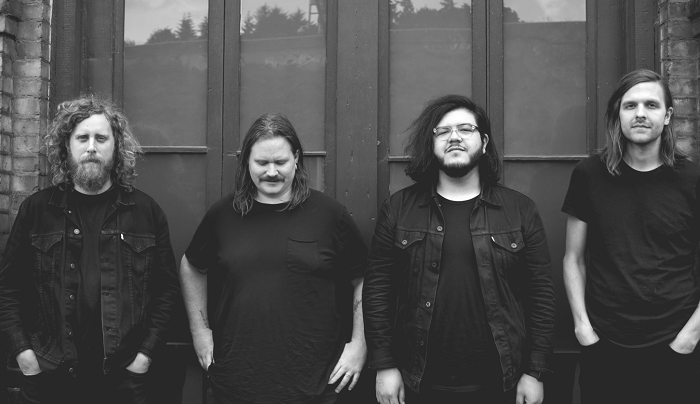 This isn’t a great time to deal with mental illness or stress with all that’s going on in our world, much less the volatile condition in which this country is situated. Not that there’s ever a great time for these things to surface, but it feels like life now can add even more pressure to situations, making it harder than usual to get a grip on things.

Coastlands’ new record “Death” could be a tool to help you get through some of these tumultuous times, with six dramatic, thunderous, and riveting tracks that its members crafted after going through pain, trauma, and suffering themselves. The band—guitarist/synth players Jason Sissoyev and Jordan Householder, bassist Andy Ramirez, drummer Trent McIntyre—decided to tackle death in all of its aspects from its physical manifestation to how we live our lives knowing that we only have a limited time on this planet. They melt those ideas, their own struggles, and what this all can mean to us on these songs (almost entirely instrumental except for some screams), and this is an ideal piece to have with you if you’re on your own rocky journey and need something to help soothe the mind.

“Abandoner” pours in as the drums ramp up, the guitars agitate, and the playing turns doomy and thrusting. The immersive sound soaks into your cells as fluid riffs bubble to the surface, while a thick bassline snakes through the dirt. A heavy whirring emerges as the pace heats up, the playing hammers, and the track comes to a gritty end. “Feverwind” has riffs scaling up before a dreamy haze takes over, and the moodiness peaks early. The music swims into a space cavern before the playing thrashes and leaves welts, glorious melodies spill intensity, and the final moments explode with chaos. “Red Smoke Flare” slowly emerges, trickling until the peace is shattered, and sounds rain down hard. Soothing melodies take over a drive for a spell before the playing kicks in harder, and the storming engulfs the senses again. Doomy hulking rages, even while serenity tries its best to regain an edge.

“Dead Friends” pokes through the walls as it slowly pours into the room, and a moody pace is achieved. Drums are tapped as guitars hang in a mist as a wordless call rises up and brings new fire. The playing feels like it exists with dark echoes before the drumming bursts to life, and wild screams hammer, leaving you disoriented and everything around you burning. “Lay Waste” punches through with doomy melodies and smoky playing that delivers tense moments. The fury is steady as the power bursts light up the horizons of the night sky, while the bass pounds its way through, and the drums explode with life. Guitars continue to gain steam, lapping and charging as the band pounds to the end. “Marrow” closes things out as wordless calls vibrate, the bass fires up, and the guitars lather you in a heavy haze. An emotional path heads into a wall of sound while the guitars plot a path, and then multiple colors explode. The playing continues to flood, rising dangerously to your throat, while the daring dashes bring the record to a fiery, dramatic end.

Coastlands bring an immersive, strangely intoxicating feel to their (mostly) instrumental attack, and “Death” is a very pointed collection that not only leaves you contemplating your journey on this planet but also has you reveling in the band’s power. Each twist and turn, sunrise and sunset on this record are methodically carved out, making your own time with the music quaking yet logical. There’s a lot of think about, plenty to absorb into your veins, and hopefully an open mind in which to do your exploring.

For more on the band, go here: https://www.facebook.com/coastlandsofficial/