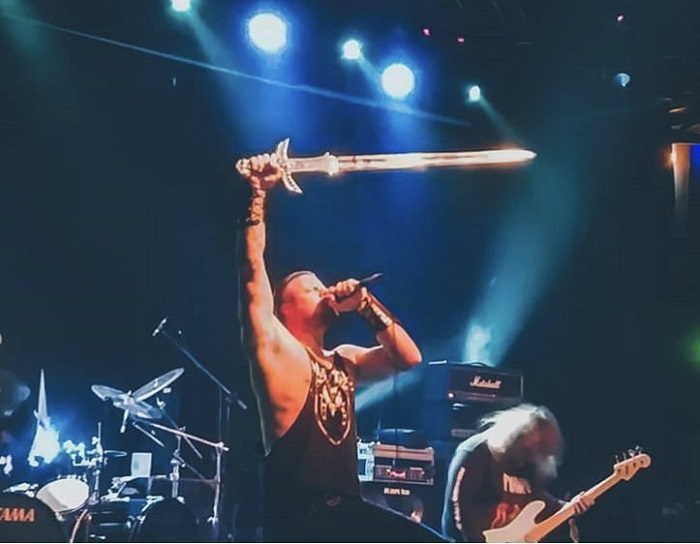 On one of the more iconic episodes of “Seinfeld,” Kramer bursts into Jerry’s apartment to ask if he and George want to have some fun. They’re not sold because it’s just driving golf balls into the Atlantic Ocean, which I honestly don’t think sounds like a good time. Anyway, we bring the same offer of fun today, and chances are you’re going to be into this.

“Ravening Iron” is the crushing second record from Texas-based epic fantasy metal band Eternal Champion, and if you take this thing on and don’t find yourself having the time of your life, you might need a quick reevaluation of your priorities. There definitely are a ton of bands revisiting the formative years of heavy metal, but Eternal Champion are ahead of the pack, which we discovered on their great 2016 debut “The Armor of Ire,” and that carries over here. Over eight pumping tracks and a compact 37 minutes, the band—vocalist Jason Tarpey, guitarists Blake Ibanez and Nujon Powers, bassist Brad Raub, and drummer Arthur Rizk—sharpens their swords, heads into mythical battlefields, and delivers infectious glory that will fill your chest with the unquestionable power of heavy metal.

“A Face in the Glare” opens with a hammer striking steel, no doubt a nod to Tarpey’s profession in his forge, before the track opens in glory, stomping its way over bodies. “The moment I land is the moment he sends the storm my way,” Tarpey wails before a chorus that etches itself into your brain forever, with the track ending in tempered fury. The title track has riffs bursting and synth creating a sheen while Tarpey calls, “The smoke reveals the gathered gods, their favor won by slavish pawns,” amid a pace that rises with power. “Protected by fire, the Armor of Ire, thousands of swords, no one can take them from me,” Tarpey belts over the chorus while the soloing cuts, and group “woah-oh-oh” calls remind of metal’s glory days. “Skullseeker” charges open before the band leans into a calculated pace, while more strong vocals pump inside your chest. Soloing lights up, a simple chorus strikes, and the track ends in charring embers. “War at the Edge of the End” smokes with charging riffs, while the powerful verses make your adrenaline surge. “For my price, I’ll roam my wretched world ’til the end of all time, I will serve as thine guard,” Tarpey blasts over the killer chorus while things get faster, the soloing destroys, and the steam that explodes from each corner burns your flesh.

“Coward’s Keep” gets going quickly and lands heavy blows, while the vocals push in and bring a hearty essence to the track. The leads are muscular as hell, teasing fire, while the plying chugs with force, as Tarpey wails, “The seas will roll, the mountains shield the battle,” over a powerful chorus. “Worms of the Earth” has an unreal open, a vision of people dying on Roman crosses as the guitars explode with life. The riffs agitate as the entire thing opens up with harder vocals and the soloing killing, with yet another awesome chorus that drives to the stratosphere, and a thrashy finish that will leave your skin stinging and red. “The Godblade” is an instrumental piece that feels like it belongs in the middle of an early 1980s fantasy film, which is probably a little obvious on my part. Its warmth and thick mist floats, heading right toward closer “Banners of Arhai” that lights the torches and heads toward the bloodshed. “Pray your gods, but know there is one less for you, I wear its blood upon my blade,” Tarpey declares as doom feels like it’s right over the horizon. Humidity thickens as the bass drives, the drums increase the intensity, and the track ends in a haze of echoes.

Eternal Champion have, in a small amount of time, become one of the go-to bands for epic heavy metal, which they spread all over the glorious and infectious “Ravening Iron.” This thing is so much fun, such a huge burst of traditional metallic power, that it’ll be impossible not to visit with this thing over and over again. This is a tremendous second effort that pays off the promise of their debut and keeps their fires raging toward a promising future.

For more on the band, go here: https://www.facebook.com/eternalchampion

For more on the label, go here: https://www.noremorse.gr/